Experience Haifa the way you have never before; check out the chic Templars Boutique Hotel.

By WILL BLESCH
Templar's Boutique Hotel
(photo credit: Courtesy)
Advertisement
Certain sections of Haifa, such as the German Colony and Wadi Nisnas, are magnificent cultural blends of Judaism, Christianity, and Islam. And, up the hill even the Bahai make their presence felt.Well, it was just after Christmas, my partner and I were in Haifa looking for a romantic getaway, and we found ourselves in the German Colony, one of the city's largest tourist and cultural centers. The entire neighborhood was still decorated for the holiday. Christmas lights, a giant Frosty the Snowman, and other traditional Christmas decorations lined Ben Gurion Boulevard. A giant Christmas tree with Jewish menorahs surrounding it stood in the center of a roundabout with lights all aglow. In the distance, up the mountain, the famous Bahai Gardens and Temple lit up the night. 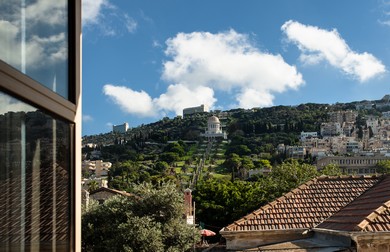 For Christian tourists from afar and the Bahai faithful, the German Colony, which was established in1868 by German Templers, is an attraction full of history, great places to shop, and some wonderful food. The Templars Boutique Hotel is smack in the center of this vibrant neighborhood, which is why we decided to stay there. We checked in and then began tooling around the neighborhood to get a taste of the still very merry spirit of the season. After a long sightseeing stroll, staying out late and just drinking in the happy atmosphere, followed by eating an incredibly flavorful Chinese dinner at the German Colony's Taipei restaurant, it was time to head back to the hotel and get some sleep. The hotel is right next to an Arabic restaurant called Fattoush. It's busy, it's bustling, and the smells are delightful. The lobby of the hotel sets a tone that suggests it's upscale and trendy, with a bar sporting neon lights and modern “clubbish,” plastic chairs and tables. I was disappointed to learn that the bar is not operating. However, this minor disappointment didn't ruin the overall experience. 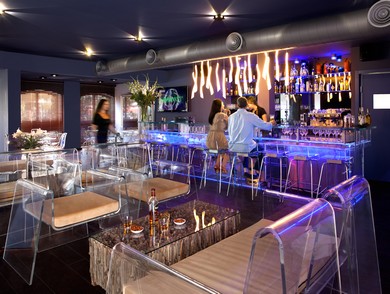 The hotel sports a number of rooms that are all significantly different from one another, and all designed with romantic couples in mind. Ours was the Sphinx Room. A lovely young woman at the front desk checked us in and then took us upstairs.  On the way, we passed a few of the other exotic-sounding rooms such as The Infinity, The Unicorn, and The Griffin. The Sphinx Room was quite comfortable, and as noted above, is suited primarily for romantic couples. For example, there is a see-through shower with a wooden floor and a size that's perfect for two. A mini staircase leads up to a very modern, art deco bedroom. With dim lighting and dark, conservative colors the entire set-up suggests privacy and sensuality. A king sized bed with an extremely comfortable mattress filled a large part of the room. Along both walls there are windows covered with heavy curtains. One of them provides a beautiful view of the Bahai Gardens and Temple seen from across the German Colony's rooftops when the curtain is pulled aside. 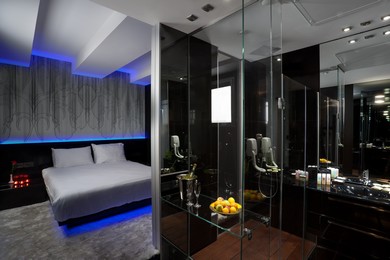 The room has a mini fridge full of regular cold soft drinks like Coca Cola and Sprite, as well as various beers and alcohols. A drink list with prices normally sits on the counter and you simply pay for whatever you drink when you leave. A huge television with cable channels completed the room. Breakfast can be had in the Templars' Cafe. I found out that this is actually the same room as the non-functioning bar. So, although I didn't get a cocktail, I did enjoy a very nice Israeli style breakfast the next morning that consisted of eggs, salad, bread, cheese and a really great cappuccino. Prices for the rooms run a few hundred dollars per night and the price of breakfast is comparable to most restaurants in the area. Although I was told that guests can bring children of any age, this is generally not encouraged. I can't help but agree. For those couples that want to check out Haifa in general, and the German Colony in particular though, the Templars Boutique Hotel has a few things going for it other than its romantic rooms. 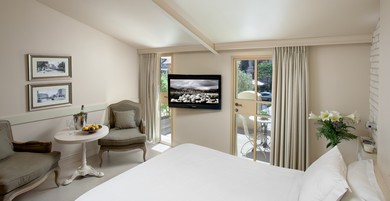 Arriving by train from Tel Aviv at the HaShmona train station can be very convenient for those that would like to take about a ten minute walk up Ben Gurion Boulevard toward the hotel. Taxis are also readily available from the train station. If one has driven to Haifa, the hotel actually shares a large parking lot in the back. Here's the takeaway: The German Colony as a whole is a must see for anyone making a trip to Haifa. For those staying overnight, the Templars Boutique Hotel is a romantic base from which love-struck couples can go touring. If you have the chance to go during the holiday season, do it! It’s an experience that shouldn’t be missed.

The writer was a guest of the hotel.