Nestled in the heart of scenic Ein Kerem, the Alegra boutique hotel fits in with its surroundings perfectly, offering warm and intimate hospitality.

By JPOST.COM STAFF
SEPTEMBER 3, 2013 15:21
Alegra boutique hotel in Ein Kerem, Jerusalem
(photo credit: Courtesy)
Advertisement
Every year, millions of people flock to Jerusalem for a number of reasons, whether it be religious pilgrimages, visiting family and friends or historical explorations. The Holy City, however, is less well known as a romantic getaway destination.But that is changing thanks to the Alegra boutique hotel, which is set in the picturesque neighborhood of Ein Kerem and offers guests an escape from the hustle and bustle of the capital’s tourist center.While today Ein Kerem is considered a suburb of Jerusalem, the quaint village has a character all its own and is a fitting place for a boutique hotel specializing in luxury getaways.Situated on the southwestern edge of the city, Ein Kerem attracts intellectuals, artists and musicians who enjoy the laid-back vibe, as well as the vineyards, orchards and olive groves that surround it. The area also has a rich history and is an important site for Christians because, according to tradition, John the Baptist was born there.Nestled in a prime location in the heart of Ein Kerem itself, the Alegra boutique hotel fits in with its surroundings perfectly.With only seven rooms, the atmosphere is intimate and the service warm.The romantic vibe at Alegra has a lot to do with the story behind the building in which the hotel is housed. It all started in the late 1920s when an impossible love story developed between Alegra Bello, a beautiful Jewish girl from Mahaneh Yehuda, and Christian Arab Jebra Francis Rahil from the village. After running away to Bethlehem early on in their relationship, in 1930 the couple returned and settled in Ein Kerem, where they built the house of their dreams. The house became known as “The House of the Jewish Girl” and was turned into a symbol of a love that crossed boundaries.The hotel is the brainchild of Bezalel Academy of Arts and Design graduates Ishai Malka and Gadi Dalman. The two saw the potential of the Ottoman- style building and decided to take advantage of its rich history and turn it into an intimate boutique hotel. Dalman, an architect by profession, was heavily involved in planning the restoration and design of the building, and his firm Lavan Architects oversaw the renovation work. 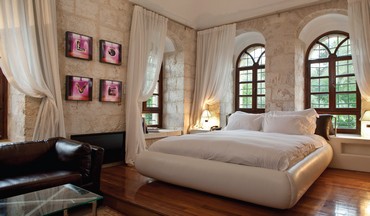 It’s hard not to fall in love with the intimate complex the second you walk through the gate. The outdoor area includes an intimate lounge, quiet seating areas, a steam room and splash pool, fishponds and small waterfalls, as well as a treatment area. There are lounge chairs on the roof of the hotel and an open bar overlooking the picturesque Ein Kerem mountains.Every effort has been made to maintain the rustic nature of the building and its surroundings, while including high-quality modern features. This mixture of old and new works very well throughout the hotel, giving it charm and character.Inspired by Alegra and Jerba Francis’s love story, each suite is named after a famous pair of lovers, such as Queen Guinevere and Sir Lancelot from the time of King Arthur or Orpheus and Eurydice from Greek mythology.The suites have been furnished and equipped in accordance with the original building, while maintaining comfort as a No. 1 priority. Hence, there is an abundance of original features, such as huge stone window frames, mixed with modern amenities.Each suite is unique in size and design, but they all contain the standard features of a king-size bed, Egyptian “cotton flower” bed linen, deluxe towels and bathrobes, as well as specially designed leather furniture specific to the individual theme.Perhaps the most distinguishing and refreshing feature of each room is the personal art library, consisting of a number of books dealing with various periods of art.The theme of art is not confined to the suites. Contemporary artwork is displayed throughout the main public spaces under the supervision of house curator Liav Mizrahi, who liaises with art experts to bring high-quality art to the hotel.The Alegra hotel is in essence a house, so meals are served in a large open-plan kitchen-lounge with a huge bar area and a few small tables, making for a very homey dining setting. 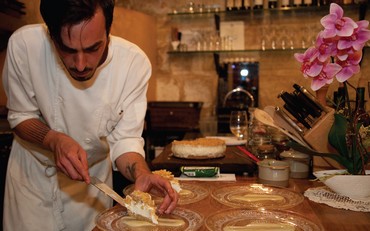 Every evening, chef Yonatan Sharvit invites his guests for an intimate meal, with some sitting at the bar enjoying an up-close view while he prepares the daily feast. The talented young chef uses local produce and raw ingredients, including herbs and spices grown in the hotel’s own orchard.Created and served right in front of the diners, Sharvit lovingly puts together a feast while chatting with guests and explaining each dish in detail. It’s fascinating to watch the chef work his magic and put his heart and soul into every course, of which there are many. A self-confessed perfectionist, Sharvit says that he is “happiest when preparing and serving people food.” His insight into the culinary delights he produces, as well as the bubbly waitresses’ repartee with guests, makes for a unique evening not found in many other restaurants.After putting his heart and soul into the exceptional dinner each night, Sharvit is up early every morning to serve a hearty Israeli-style breakfast. While it’s not as interactive as his dinner “shows,” he can still be seen in the open kitchen preparing his delicious creations.After all the good food, guests can take advantage of a variety of spa treatments, which during the summer are also offered outdoors in a beautiful setting on the hotel’s grounds.For those who want to take partake of the wide range of spa treatments but don’t have time to spend a whole night at the hotel, there are various packages available.For example, the hotel offers a Fun Day, which includes the use of a suite from 10 a.m. to 5 p.m., breakfast in the hotel lounge, spa treatments for two, wine and use of the hotel facilities, such as the pool and steam room. This option costs NIS 1,450. In the evening, a similar offer is available with use of the suite from 3 to 10 p.m. and the opportunity to take part in the intimate chef’s dinner. This option costs NIS 1,800. The dinner offered is an experience in itself.The average price per couple for bed and breakfast in a premium suite is NIS 1,500 during the week and close to NIS 2,000 on the weekend. Alegra caters to a specific market, and it does it very well in that sense, as it offers excellent value for money.Alegra attracts mainly couples who are looking to indulge themselves and enjoy the excellent services available. It’s ideal for those who want to celebrate a special occasion or simply get away from it all and be pampered in a luxurious setting.