Voices of Jerusalem: Raised on rugelach

By LOREN MINSKY/ ITRAVELJERUSALEM.COM TEAM
Bakery 311
(photo credit: Courtesy)
Advertisement
“I would say that I have easily baked the most rugelach in the world,” contents Itzik Ozarko, founder of the famous Marzipan Bakery in Jerusalem’s Mahane Yehuda market. The bakery is a somewhat of a Jerusalem landmark, popular with locals and tourists a like who go crazy for the wide selection of baked goods, and most of all the rugelach.“I got involved in the family business when I was 14 years old and have baked ever since. My father immigrated to Israel from Turkey when he was a young boy, and became a baker as a means to make a living,” he explains. “My father realized he was good at it, took the practice seriously and learned from some of Israel’s top bakers. He opened Marzipan Bakery in Mahane Yehuda in 1986.”“Today, I run the bakery with my brother. I’m responsible for the baking and my brother manages the finances,” says Ozarko. “My father is still involved with big decisions, and my mom comes in to help with selling.” He explains that its a real family business even now that they have a franchise store in the German Colony. “We remain hands-on to ensure the same fresh, quality products and atmosphere,” he says. “My wife provides the emotional and spiritual support with the right words at the right time.”While Orzako enjoys the work he points out that running a bakery is long hours and exhausting work. “In 24 years, I have taken minimal holiday and work even harder on Fridays when most people have off and over the holiday period. G-d really knew what he was doing when he gave Jews Shabbat.” In an effort to unwind, he says that he tries to read and learn as much Torah as possible. “I also have another business, the Giraffe Gyms around Jerusalem, and try to work out there whenever I can.”“I love Mahane Yehuda and believe it’s deserving of all the fanfare it receives. There are some challenges operating here like thievery, managing the crowds, incessant traffic, beeping on Agrippas Street and a general lack of patience but it’s still the most special place in the world,” he says. “The character of many of the vendors and stall owners is unparalleled and people come from all over the country and the world to experience it. We have many regular local customers, and are also accustomed to tourists and many different languages, faces and accents.”“I grew up in Nachla’ot and the neighbourhood evokes a great deal of nostalgia within me. I have so many vivid, special memories in its tiny, winding alleyways and around the shuk area,” Ozarko reminisces. “However, it’s a challenging place to raise kids and my wife and I made the decision to move to Mevasseret Zion out of a need for more schooling options, space for our children and to be closer to nature.” 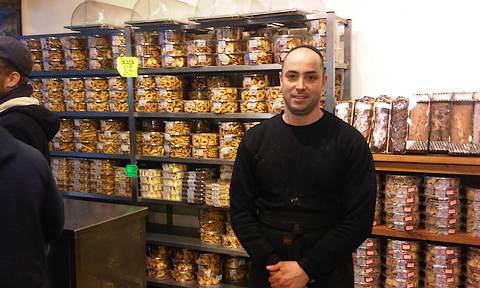 Marzipan Bakery
“Americans in particular love our chocolate rugelach (known in Hebrew as shmarim) and refer to them as marzipan despite there being no marzipan in the ingredients. They’re also available in cinnamon, vanilla, sesame seeds, blueberry, apple, poppy seeds, chocolate chip and cheese danish. My favorite is the chocolate and cinnamon variation and I try to have only one here and there during the week.”He explains the secret of Marzipan’s rugelach: “A winning combination that my father worked hard at perfecting, and the fact that we don’t compromise at all on their rich contents such as lots of cacao, a bit of oil, some coconut and other natural ingredients. Most of our business is through word-of-mouth – the taste of our rugelach says it all.”“We put a lot of work into our rugelach, and it’s worth it. Marzipan rugelach taste delicious on the first day you buy them, and even after two weeks. In fact, many people buy them fresh, freeze them before an overseas flight, let them defrost on the plane and then refreeze them on the other side,” Orzarko explains proudly.“I try to connect to G-d when baking, in the business and with everything that I do. Perhaps if I worked fewer hours, I would have the time and energy to reflect on what I love most about my work. I live my job more than I love it.”Marzipan Bakery, 44 Agrippas Street, Jerusalem (02) 623-2618.Kosher (Rav Rubin, Beit Yosef, Rabbanut) iTravelJerusalem.com is a new online international travel portal offering all the latest information on things to do, places to eat and places to stay in Jerusalem.
Advertisement
Subscribe for our daily newsletter