By BARRY DAVIS
Nonstop Tel Aviv
(photo credit: dana friedlander)
Advertisement
Tel Aviv is undoubtedly our New York, our Big Apple that happily keeps going 24 hours a day. To paraphrase, and geographically relocate, the lyrics from that stirring New York-related Frank Sinatra number, Tel Aviv is our city “that never sleeps.”There is a multitude of sites, attractions and venues designed to keep the visitor busily engaged, or happily chilling out, all over the city and around the clock. The beach is always a good reference point in the metropolis, not only because it is the farthest west you can go without getting your feet wet but also because it offers a large, fun expanse to do your own thing, let off some steam or just soak up some caressing rays – and all for free. And if all that gamboling about on the sand, and in the sea, and sunbathing gets you feeling peckish, there are plenty of eateries dotted along the seafront where you can satiate your hunger and quench your thirst as the waves roll in. 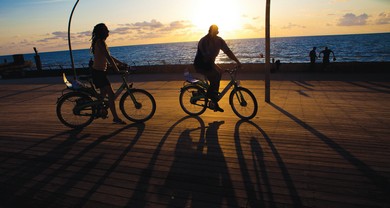 The promenade also offers a perfect vehicle for taking time out and enjoying a stroll near the Mediterranean, while cyclists can take full advantage of the new bicycle path that stretches almost all the way down to Jaffa.If it’s culture you’re looking for, Tel Aviv has an abundance of art houses, music venues and other venerable institutions. On Shaul Hamelech Boulevard, you can get a handle on some classic art and plenty of contemporary creations at the Tel Aviv Museum of Art, with its inviting main building; and the glittering sunlit Herta and Paul Amir Building opened just over a year ago. The museum also hosts workshops, lectures and concerts.Meanwhile, just down the road, the Israeli Opera House and Performing Arts Center always has a rich array of operatic and children’s entertainment on offer, as well as jazz concerts and contemporary Israeli music shows. The same compound also houses the Cameri Theater, and there are plenty more theatrical offerings to be had around the city, such as Habimah Theater, Tzavta in the London Ministore building and Beit Liessin, not to mention slightly left-field theatrical institutions, such as Tmuna Theater and Gesher in Jaffa. 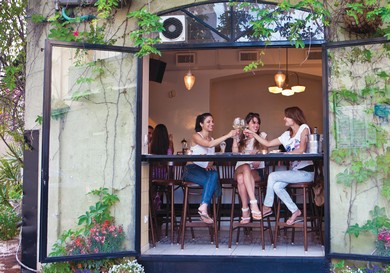 A stone’s throw away from the latter, in the picturesque neighborhood of Neveh Tzedek, the Suzanne Dellal Center hosts plenty of top-quality dance entertainment by such companies at Batsheva and Inbal, while the Orna Porat Theater for Children and Youth does its best to keep the younger crowd suitably engaged.Just north of the Yarkon River, the Eretz Israel Museum offers historical exhibitions, contemporary art and archeological finds. And a two-minute drive up Levanon Street, the campus of Tel Aviv University is home to the Genia Schreiber University Art Gallery and Beit Hatfutsot, Museum of the Jewish People.There is also a wide range of contemporary music to be had across the city, including rock, jazz, world music and pop shows at places such as the Einav Center next to the municipality building, and Levontin 7 near the southern end of Allenby Street.Despite its relative youth, Tel Aviv has quite a few sites of historical interest, such as the German Colony near Kaplan Street, David Ben-Gurion’s house on Ben-Gurion Boulevard, Beit Shalom Aleichem and Independence Hall on Rothschild Boulevard, the former premises of the Tel Aviv Museum of Art and, more famously, the site of Israel’s declaration of independence in 1948. 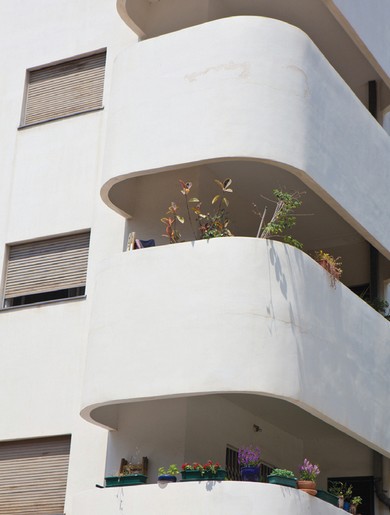 Ten years ago, UNESCO proclaimed the historic area of Tel Aviv as a World Cultural Heritage Site, with specific reference to the around 4,000 Bauhaus style buildings dotted around the downtown area, many of which can be viewed in the streets of the Lev Tel Aviv neighborhood between Allenby Street and Ibn Gvirol Street.Of course, there are plenty of outdoor sites to enjoy, too, such as the bustling, colorful and spice-laden Carmel Market where, besides fruit and veg, there are plenty of fun things to buy, and generally at knock-down prices. Just next door, the Nahalat Binyamin pedestrian street sports some attractive restaurants and cafés, stores with all manner of wares for sale, and arts and crafts stalls a couple of days a week.You can also get a good idea of the urban layout from observation points in the Shalom Tower on Herzl Street, once the tallest skyscraper in the Middle East, and the Azrieli Center.There is so much to do in Tel Aviv that it is really worth staying overnight. At the end of a busy day choose one of the many different hotel accommodations the city offers – and there are practically every type and standard, to suit all pocket sizes.The seafront is a good place to stay where, naturally, many of the hotels offer delightful views of the sea. These include five-star facilities at the Dan Hotel, Herods Hotel, the Crowne Plaza Hotel, the Renaissance Hotel and the Sheraton Hotel, which are all located around the Gordon Street and Marina section of Hayarkon Street, with the veteran Hilton Hotel just slightly to the north, while the Dan Panorama and the David Intercontinental hotels occupy more southerly berths along the seafront, also offering enticing views of Old Jaffa.The West Hotel is only slightly farther inland, and the Crowne Plaza Hotel City Center Hotel is located farther east in the square tower of the Azrieli Center. The Leonardo City Tower Hotel sits comfortably betwixt the skyscrapers near the interface between Tel Aviv and neighboring Ramat Gan.There is a host of new boutique hotels along the fashionable Rothschild Boulevard for the more discerning visitors, including the Rothschild, Berdichevsky, Town House, Brown, Eden House and the newly opened Rothschild. Check them out, especially if you are interested in spending a night where the locals like to hang out.The city’s four-star hotel facilities include the Cinema Hotel on Dizengoff Square, which offers comfortable surroundings right in the city center, amid the nostalgic ambience of the memories of the Esther Cinema that once operated from the building. The Marina Hotel, near Atarim Square, is right on the seafront, while the cozy Metropolitan Hotel is on Trumpeldor Street, a threeminute walk from the beach.Just a notch down in the star ratings, the Armon Hayarkon Hotel also offers a whiff of the sea breezes, as do the Golden Beach Hotel on the promenade and the Port Hotel across the road from the Port of Tel Aviv compound, with its swanky stores and seafront eateries and music venues.Visitors looking for budget accommodation may find something to suit their pocket at the Gordon Inn hostel, near the sea, the bright and breezy Tel Aviv Beachfront Hostel on the promenade, or the Florentine Backpackers Hostel on Elifelet Street in the fun southern district of Tel Aviv. For more information about tourist facilities and hotel accommodation in Tel Aviv: www.israelhotels.org.il and www.visit-tlv.com
The article was made possible with the help of the Israel Ministry of Tourism , www.goisrael.com