Chautauqua offers nine weeks of culture and stimulation to visitors from around the world – a third of whom are Jewish.

By STACEY MORRIS
JULY 4, 2010 03:03
everett 311
(photo credit: Stacey Morris)
Advertisement
CHAUTAUQUA, New York – Where can you do the following: take in a chamber concert, brush up on your French, spend, listen to a lecture delivered by a Pulitzer Prize-winning author, while the afternoon away on a sailboat and cap it all off with an evening performance of La Traviata? Big cities offer only part of the equation, but what about tranquility in a natural setting? That’s where the Chautauqua Institution comes in. The 750-acre compound jolts to life each summer to welcome tens of thousands of visitors from around the world for nine weeks of culture and stimulation.With rich offerings that center on the arts and outdoor recreation, it is often likened to being a summer camp for adults. But anyone who has experienced the Chautauqua Institution knows that it’s an experience that defies categorization.“It’s like trying to explain the taste of chocolate,” said Tom Becker, president of the Chautauqua Institution, a nonprofit, board-run entity. “It’s not like anything or anyplace else.”The property has a small number of year-round residents, but the majority of the institution’s lifeblood courses during the nine-week summer season that’s jam-packed with more than 2,000 scheduled activities.The institution got its start in 1878 as a Methodist retreat, when it consisted of platform tents and a few meetings. Through the influence of the utopian movement that was sweeping that part of the Empire State and the Midwest, the camp evolved into an interdenominational organization with an emphasis on continued learning.“We believe in continuing education as a pathway to a reverent, fully realized life... faith is not enough,” said Becker.Though there are more than 16 different Christian denominations represented on the grounds of the institution, there is now a thriving Jewish community.It began in 1891 with the first Jewish speaker, Gustav Gottheil, a prominent liberal rabbi from New York City’s Temple Emanu-El. Two years later, Philadelphia Rabbi Henry Berokowitz founded the Jewish Chautauqua Society, creating a society using the institution’s methods to disseminate knowledge of the religion to Jews.And despite a history rooted in Protestantism, nearly a third of the summer residents are Jewish, with Jewish-themed lectures and programming growing each year. The Chabad Lubavitch of Chautauqua celebrates its 10th year at the institution this summer, and offers weekly lectures on Jewish tradition and history, Talmud study, even classes offering techniques in braiding the perfect loaf of halla. Rabbi Zalman Vilenkin is the executive director of Chabad Lubavitch of Chautauqua. He and wife Esther run the programming as well as events that include the annual community kosher barbecue (taking place July 25) and community Shabbat dinners. Chabad’s 10th anniversary at the Chautauqua Institution will be celebrated with an August 1 gala dinner in the historic Athenaeum Hotel. 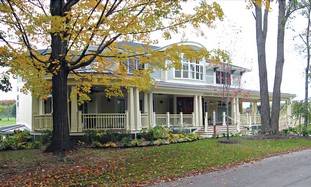 IN HIS decade spent at the Institution, Vilenkin has seen interest in Judaism grow exponentially. “There has been a growing and keen interest about what Judaism is, and the response has been positive and supportive,” said Vilenkin, assistant dean at the Talmudical Seminary of Brooklyn. “Priests and reverends bring their friends and congregants; they come on a consistent basis every year.”Last summer saw the dedication of the newly built Everett Jewish Life Center that houses meeting space for programming and community events, a library, an industrial-sized kosher kitchen and hotel-like overnight accommodations.Edith Everett, a retired senior vice president of investments at Gruntal & Co., who has summered at Chautauqua Institution for more than 30 years, funded the center. She dedicated the $1.5 million building to the memory of her husband, Henry Everett, who died in 2004. Everett is also cofounder and president of the Everett Family Foundation and currently serves on philanthropic boards that include Human Rights Watch, American Jewish Committee, International Hillel and the Blaustein Institute for Human Rights.“The Everett Jewish Life Center provides a place for the Jewish Community of Chautauqua to call home,” said Richard Moschel, a year-round resident of Chautauqua and treasurer of the center. “Instead of beings guests, we’re hosts.”The 7,700-square-foot center is trimmed by a 1,300- foot wraparound front porch, a community room with retractable projection screen and state-of-the-art sound system, a cozy dining room with a Dali painting of the Western Wall and many an eco-friendly feature.“Our metal roof has solar panels,” explained Moschel. “All of the center’s hot water is heated through the panels.”Everett herself selected the soothing color schemes of the guest rooms and decorated each with purchases from local furniture stores and interior design firms. The linens, however, are made in Arad out of Galilee cotton.Moschel said notable guests at the center have already included former Knesset member Michael Melchior, Elie Wiesel, and Justice Gabriel Bach.“Our programs are designed to embrace different philosophies,” Becker said. “We’ve had Muslim leaders come to speak, Buddhists giving lectures on compassion and Sikh meditation groups. Some participants are interested in the religious aspect of a lecture; others, with no claim to religion or faith, enjoy learning about the ethical side of a philosophy.”Sometimes the focus of programming inevitably leads to politics, which Becker says falls in perfect alignment with the institution’s open-minded attitude.Paving the way was president Franklin D. Roosevelt’s history-making “I hate war” speech, delivered on the grounds of the Chautauqua Institution in 1936. Since then, political visitors have included Bob Dole, Al Gore, Bill Clinton and members of the Israeli government.“We’re not attempting to create an undifferentiated stew – the real stew is that everyone who attends is a Chautauquan, which enables us to talk about our differences.”The theme weeks of the 2010 season will include The Supreme Court, Alternative Energy Sources, Nuclear Power and Weapons, Sacred Spaces and Excellence in Public Education.“Intellect and moral earnestness are common characteristics of Chautauqua,” said Becker. “It’s a place where people can hear some of the world’s leading thinkers speak on issues and concerns of current times, and do so with civility and respect.”FOR DECADES, notable figures have been drawn to the institution for lectures and performances, including Jane Goodall, Salman Rushdie, Sandra Day O’Connor and Tony Bennett And as Marty Merkley, the institution’s vice president and director of programming, says, the arts may have begun slowly at the turn of the century, but today’s offerings feature a dizzying array of classes, activities and performances.“We now have an entire music campus, as well as a dance theater and performing arts theater,” he said.“There’s also a focus on the domestic arts such as knitting, weaving, and painting.”Becker adds that the Chautauqua Institution experience extends far beyond learning. “People come for different reasons,” he explained. “Sometimes it’s intellectual, physical, or spiritual renewal. And sometimes it’s all of the above.”With its no-car policy (except for unloading luggage), the grounds are imbued with a sense of quiet as visitors make their way on foot or bicycle to lectures and concerts. There’s a comforting feel of yesteryear that canvases the property, from the chimes of the lakeside Miller Bell Tower to the “Get your Chautauqua Daily,” shouts from newsboys each morning as the sun rises over Lake Chautauqua.Many visitors, such as Nancy Sohn of Chicago, come as much for the tranquil way of life as for the programming.She and her husband Mike and their two sons have been spending summers at the institution for 12 years.“There’s a sense of safety and freedom here that we don’t have in our everyday lives,” said Sohn, an attorney.“My son can run errands on foot or on his bike for milk or The New York Times... something he wouldn’t be able to do on his own at home.”Sohn also loves the exposure to the arts which the Institution provides her family – in an easygoing way.“In Chicago I’m not going to pay $50 for symphony tickets and have them stay only 15 minutes,” she said.“But here, they can walk to the amphitheater, hear one movement and walk back home.”After only a few years, Sohn and her husband decided they were in it for keeps and bought a home on the grounds. Moschel and his wife felt a similar pull to make the institution a more permanent part of their lives. “We’ve been coming since the ’70s,” he recalled.“At first it was just a nice place to spend a Sunday, but it really began to grow on us and we bought a home.”Vilenkin describes Chautauqua as a perfect setting for Jewish culture and philosophy to flourish. “Chautauqua is a place where people are stimulated by study and culture, so it’s the ideal place to present Judaism, which has both. We have a very rich history... and there’s always something to learn.”(For more information on the Chautauqua Institution, visit www.ciweb.org. For more information on the Chabad Lubavitch of Chautauqua, visit www.cocweb.org. For more information on the Everett Center for Jewish Life,visit www.jewishcenterchautauqua.org.) The writer is based in Lake George, New York.www.staceymorris.com
Advertisement
Subscribe for our daily newsletter