A quick hop over to this Greek Island has never been easier.

By EVEY RUSKIN, DAN IZENBERG
JUNE 4, 2010 23:10
rhodes 311
(photo credit: Evey Ruskin and Dan Izenberg)
Advertisement
Most of the Israelis on the filled-to-capacity charter flight we recently took to Rhodes went straight from the airplane to a fleet of waiting tour buses which brought them to large beach hotels.Staying at these hotels is a sensible thing to do when one travels with young children, as most of our fellow passengers did. The Aegean Sea at the end of May is dark blue, most of the days are sunny and clear, though the temperatures can still be a bit cool. The hotels are large and comfortable, meals are available and there are supervised swimming pools for the children.RELATED:
The oldest synagogue in GreeceBut for young (and old) who are vacationing unencumbered, the old, walled city of Rhodes offers a romantic, aesthetic and historically fascinating alternative.We didn’t really know this when we booked a room at the Spirit of the Knights Boutique Hotel, tucked away on a narrow side street. Once there, however, we discovered that the old city of Rhodes is the largest medieval fortified city in Europe and has been designated by the UN as a World Heritage city. It is surrounded by a magnificent wall, including striking medieval towers, a wide moat and medieval coats of arms sculpted into the stone.There are many public buildings reflecting the history of the city, a somewhat tragic one of invasion, conquest and occupation until the Dodecanese islands, of which Rhodes is the largest, became part of Greece after World War II. These buildings include the Palace of the Grand Masters, the clock tower, the Archeological Museum of Rhodes, the Turkish Library and the Turkish hamam (which is currently closed). But these dramatic structures and many others like them are only the most obvious sites of the old city.The best advice is simply to meander along what seems to be an endless warren of narrow, winding pedestrian streets filled with one- or two-story houses, a few of them apparently purchased and refurbished by wealthy owners, others looking like they probably did hundreds of years ago. Many of the houses seem to be held upright by arched abutments overhanging the street and attached to the houses on either side. Parts of the streets are still paved with the original cobblestones. You can easily get lost walking along these streets but not too lost, because ultimately you will end up reaching one part of the wall or another.THE OLD CITY is not a museum. The population of the entire city of Rhodes is about 65,000. Some 8,000-9,000 live within the walls and you can find vegetable stores, butcher shops, bakeries and local cafes along the side streets.However, the main streets are devoted to tourism, which is by far the key industry of Rhodes. In addition to those who come to spend a few days, there are thousands of day trippers disengorged by the four or five gigantic tour boats, looking like massive apartment buildings, which choke the harbor each day. Almost all of them are headed 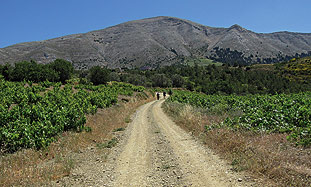 for inaptly named Socrates Street, which is filled with stores selling touristy schlock, restaurants and the occasional higher-end jewelry, clothing or carpet store.Our hotel was at located at the southwestern edge of the old city, off the beaten track. It was outstanding for its beauty and good service, but above all because of the family that owns and runs it.The owners are Felicity Marshall, a statuesque 63-year-old Englishwoman, her sons, Kyle and Alex, her daughter, Keera, and Keera’s husband, Duncan. To be more precise, Kyle is Marshall’s biological son, while Alex and Keera, both born in India, are adopted. Marshall has a total of 16 adopted or foster children.She told us she was born to poor but extremely loving parents. When she was 14, she visited an orphanage and announced that when she grew up, she would raise such children who did not have the advantage of a loving home. As good as her word, she took in her first child at 23, after finishing nursing studies.But Marshall somehow found time for another pursuit as well: the pursuit of beauty. She spent many years renovating homes. This talent is on display in every nook and cranny of the hotel she built out of a few a few dilapidated walls. She purchased the site several years ago, built it almost from scratch within 18 months and opened it, with her children, two years ago.The hotel has five suites and one room, most of which are built around a large living space filled with books, a small sofa and chairs, a red carpet and antique odds and ends that she has picked up on the island. On the far side of the area, opposite two of the rooms, is a huge picture window looking out over the city.Downstairs, guests are offered a generous breakfast in the courtyard. One of them summed up the experience in two words, “beautiful” and “classy.” It is not cheap, however. The room ranges in price from €105 in the winter season (December 1-March 31), to €145 in the low season (October 1-November 30; April 1-June 15) to €200 in the high season (June 16-September 30). The suites, which are of different sizes range from €120 to €190 in the winter season, €170-€270 in the low season and €250-€350 in the high season.In our meanderings, we came across several other small hotels in the old city which were substantially less expensive, although obviously not of the same standard as the Spirit of the Knights. Among these were the Hotel Marco Polo, a lovely, informal 12-room Turkish-style hotel, the Hotel Andreas, nine rooms, and the Sofia Pension. All these hotels have their own Web sites.We did not do much food sampling. Our hosts recommended the roof garden at the Hotel Marco Polo, where the food was indeed excellent, and the picturesque Ta Kioupia. Both served traditional Greek food. We also learned a culinary lesson the hard way. Never order a whole fish by weight without asking the price in advance. We were not aware of this and paid a heavy price for our ignorance.One more thing to remember is that there is no tipping in Greece. It is not part of the culture.AFTER EXPLORING Rhodes for a day and a half, we ventured out of the city by boat to Lindos, a village known for its sandy beach and calm waters which is protected by a deep bay. Lindos is about 48 kilometers north of Rhodes. Aside from the beach and an imposing Acropolis built on a steep rock abutment above the village, we were told that we must visit the Melenos Lindos hotel.It took owner Michalis Melenos 13 years to build the hotel, whichconsists of whitewashed cubes that blend in perfectly with thetraditional Greek village architecture of Lindos. Melenos was born inLindos but spent many years in Italy and returned to fulfill a dream.The hotel includes a gift shop, which Melenos justifiably calls a“mini-bazaar.” It is filled with brilliant colors and exotic textiles,jewelry, ceramics, clothes and more.The hotel also has a roof-top restaurant which is open to the public.There is a donkey service from the boat pier to the village or, furtherstill, to the acropolis. From the squeals of the children, the ridelooked like great fun.The acropolis includes the partly restored remnants of a Greek templedevoted to the goddess Diana, columns, pavement stones and staircasesfrom Greek and Roman times, and part of the façade of a Byzantinechurch. The visit, which costs €6, is well worth the effort of gettingthere.A round trip by boat from Rhodes to Lindos costs €25 and takes about anhour and 45 minutes. We paid half price for a one-way ticket andreturned by bus, after taking a free shuttle from the village center tothe highway. The trip home cost €4.60 and took about an hour.There is also a hiking company called Walking Rhodes, which beganoperating last year. The company offers 14 different routes lastingbetween three and eight hours. We chose the shortest one, a walk in theEmbonas wine district. The guides were very helpful and congenial andthe hike gave us a chance to see a bit of the hilly interior of theisland. The hikes range from easy to very difficult, but most aremoderate and can be done by almost anyone.
Advertisement
Subscribe for our daily newsletter