Local folklore has it that Bostic, North Carolina, an overgrown hilltop, is the real birthplace of Abraham Lincoln.

By JOHN BORDSEN
FEBRUARY 5, 2010 19:20
lincoln's birthplace 311 USE
(photo credit: MCT)
Advertisement
Note to aspiring saints and office-holders: You’ll know you’ve achieved “legendary” status when whispered tales are attached to your life story with question marks. The higher you rise, the more there are.Consider Abraham Lincoln. There are tales about him in Washington, where the 16th president saved the Union and was assassinated. Likewise in Springfield, Illinois, the closest to a normal “home” the self-made Lincoln had.Likewise in this Rutherford County crossroads where some say he was born atop Lincoln Hill, just east of larger and more rugged Cherry Mountain.The world at large believes he was born February 12, 1809, in a cabin near Hodgenville, Kentucky. At least once, Lincoln himself put this in writing. It’s where the National Park Service oversees the Abraham Lincoln Birthplace National Historical Park.The Bostic Lincoln Center holds otherwise. According to its research, what remains of his birthplace is about an hour west of Charlotte, a ruined foundation in a thicket of trees above a creek. It’s on private land to which the center has access. Call in advance, and Keith Price or another member will walk you up there on a short run of trails that vanishes in a maze of chestnut oak and pine saplings.Before or after you make the easy climb, you’ll hear why they believe the American Moses was the illegitimate son of Nancy Hanks – and that a ne’er-do-well named Thomas Lincoln was hired to take her and her infant to Kentucky, where Lincoln married her and claimed the child as his own.Among the reasons Price was disinclined attend a Lincoln birth bicentennial last year in Raleigh: “It was probably his 205th birthday.”
The standard bio: Thomas Lincoln crossed into Kentucky and married fellow Virginian Nancy Hanks in 1806. Abe was their only child to live past 21. Nancy Hanks died in 1816.Lincoln acknowledged his humble beginnings – his “Rail Splitter” nickname plays off his workingman past – but didn’t discuss his parents much. Nancy Hanks was herself probably illegitimate, a factor that could’ve been lethal in the highly charged 1860 presidential campaign.The election and bitter war that followed brought more scandal-mongering. With his assassination came a flood of recollections about a man with an obscure past. Various accounts had Lincoln born at 15 sites in three states.At the Bostic Lincoln Center, you’re likely to run into Keith Price and Lydia Clontz, its president and vice president, respectively. Price, born and raised in Rutherford County, was a contractor in Gastonia; Virginia-born Clontz lived in various states before retiring in Bostic.They gradually became involved in a time-honored legend built into a cause by Tom Melton, a local school principal whose passion was proving Lincoln’s Bostic origins. Melton died in 2008. The center, which opened that year, acquired his books and files. “He revered Lincoln for a lot of reasons,” recalls Price, Melton’s friend. “He wanted the president’s greatness equally attributed to where he came from.” In the early 1900s, three rail lines crossed at Bostic; trains no longer stop there. The center is the former Seaboard depot, moved back from the tracks and spruced up with volunteer elbow grease. The main chamber, the onetime freight area, is the size of a living room. It is dominated by a trio of wall-mounted storyboards, each 120 x 150 cm., that spell out the Bostic case.A heavy wooden table in the middle of this gallery provides the ideal place to argue and speculate.A handful of other items line the room: a set of Victorian women’s clothing, a 19th- century spinning wheel and several cases holding books and curios.Unquestionably Abe’s: Framed on one wall is an original Civil War certificate, signed by the president and by secretary of state Edwin Stanton. It discharges a man named McCampbell after 100 days of military service.From the Lincoln Hill ruins: the leg of a cooking pot, a chunk of graphite used for writing, and metal fragments from a pie safe. All were found in the 1960s. The site has never been excavated by professional archeologists.Related to the Bostic case: a photographic portrait of Richard Martin, one of several area men who have been suggested as Lincoln’s actual father.LINCOLN SCHOLAR Edward Steers says 16 men have been named as the president’s father, a list that started as an 1860 smear and continues to this day. In an essay posted at Abraham Lincoln Online, the distinguished historian presents the case that the N.C. Lincoln argument is “spurious.” He convincingly points out that there were multiple women named Nancy Hanks living in Western North Carolina in the early 1800s, that the Rutherford County servant girl was not the president’s mother and why place-specific records show it was impossible for Thomas Lincoln to have passed through the Bostic area. 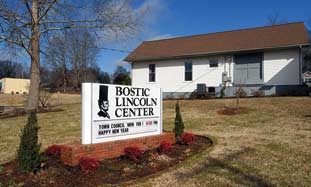 Price and Clontz counter that much of the official-line documentation turned up after Lincoln’s death.Adherents of the official and Bostic arguments poke holes in each other’s time lines and sources – an easy task, given the rarity of frontier records.Price believes that what inches the Bostic claim above any paper chase is oral tradition: When Lincoln was alive and Rutherford County was decidedly Confederate, there is no sensible reason area people would invent a tale of Lincoln’s being a native son. Bostic tales persisted and made their way into books. Among the three authors who transcribed first-person, N.C.-origin stories was Judge William Herndon, Lincoln’s law partner from Illinois.Price is no ax-grinder. He comes across as thoughtful and well-read. He knows the objections of the “official” side inside and out and discusses them dispassionately. Price cites the diary of future assassin John Wilkes Booth, whom he says wrote of passing through Rutherford County and visiting Amos Owens’ tavern atop Cherry Mountain – and hearing there that the despised Lincoln was home-grown.Price isn’t aware of any Hanks descendants in the area now, but there were Hanks families in the area back then.The Bostic story goes that Nancy was bound out
as a servant girl to Abraham Enloe, a backwoods grandee whose rustic plantation house was atop what’s now called Lincoln Hill. Whether she became pregnant by him or someone else depends on which piece of folklore is considered.“We agree with the Kentucky story on two points,” Price says. “First, the marriage of Tom Lincoln and Nancy Hanks in Kentucky by Deacon Jesse Head in 1806. Head wrote that she had with her a ‘black-haired boy.’ Second, that in his stepmother’s Bible, Abraham Lincoln wrote his birth date as February 12, 1809. This is what he was told; it is an honest mistake.” The Bostic Lincoln Center says truth is what its members seek – and it could all be easily sorted out, one way or the other, with DNA matching.There were rumors for centuries that Thomas Jefferson was the father of the children of Sally Hemings, one of his slaves. DNA from Jefferson’s descendants and that of Hemings descendants was compared. The results are still being debated – but are conclusive enough for the Monticello-based Thomas Jefferson Foundation to say the Founding Father likely sired her children.All agree that Abe Lincoln’s only blood sibling, a sister, died young and without issue. Also, that his last direct descendant died in 1985.But the Bostic Lincoln Center has programs from time to time, and one speaker was Ernest Lincoln III, a descendant of Thomas Lincoln and the woman he married after Nancy Hanks died. This Lincoln believes Abe is his relative but is willing, Price says, to donate DNA material to help put the paternity issue to rest.Descendants of Abraham Enloe are still around, and are petitioning the government for DNA analysis.Both Lincoln and Enloe samples need to be compared with an authenticated sample of Lincoln’s DNA.That would be found in Washington, at the National Museum of Health andMedicine, which has pieces of Lincoln’s hair and skull and theblood-stained shirt cuffs of the surgeon who conducted the president’sautopsy.You can see those items, by the way: They’re part of “Abraham Lincoln:The Final Casualty of the War,” an exhibit that opened last year – tocommemorate the president’s birth 200 years before in a log cabin inKentucky.What if DNA tests prove the people in Bostic are wrong?Price waves his hands in an over-and-done-with motion. “That’s it. Speculation is over.” What if DNA proves Thomas Lincoln was not Abraham’s father? “Research moves over to the Enloes and others.” That would also change the travel plans of anyone headed to Lincoln’sbirthplace. The ruins atop Lincoln Hill would be professionallyexcavated and preserved. A historic photo in the Bostic Lincoln Centershows the site in the 1920s. There clearly was more of it around. Time,nature and souvenir hunters have been at work.The way to the ruins would be better marked; the gravel road up the230-meter hill would be redone, as well as the two-lane bridge over thefast-moving stream.It’s called Puzzle Creek.
– The Charlotte Observer/MCT
Advertisement
Subscribe for our daily newsletter