Both the Hillary Clinton and Donald Trump campaigns are now shifting to the general election. 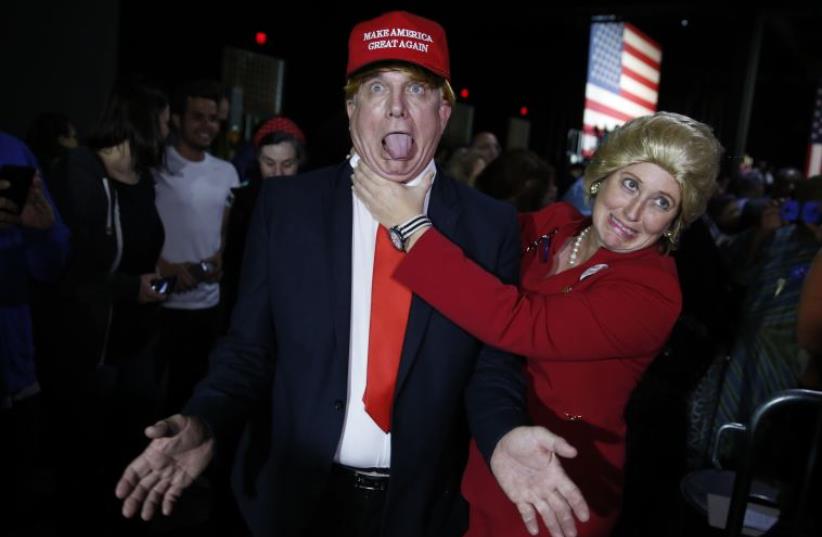 Supporters who came to a Hillary Clinton rally in costume as Republican presidential candidate Donald Trump (L) and as Mrs. Clinton (R) clown around in Miami
(photo credit: REUTERS)
Advertisement
Donald J. Trump and Hillary Rodham Clinton are all but certain to win their respective party nominations for president of the United States, setting up a general election unprecedented in modern history between two of the most well-known figures in American politics.The celebrity matchup is virtually assured after New York businessman Trump defeated Texas Sen. Ted Cruz in Indiana’s Republican primary on Tuesday. Cruz dropped out of the race that night. Subsequently, on Wednesday night, Trump’s last remaining competitor for the party’s nomination, Ohio Gov. John Kasich, also quit the race.Both campaigns are now shifting to the general election.But whereas most candidates have had to introduce themselves to the American public in years past, a race between Trump and Clinton will be of an entirely different nature. Recent Gallup polls show that Trump’s name identification among Americans stands at roughly 95 percent, with Clinton’s slightly higher.Most Americans have already established their impressions of the two figures, who both face extraordinarily high negatives detrimental to their campaign efforts – for Trump among women and minorities, and for Clinton on matters of trust.But Trump’s extraordinary success thus far in the Republican primaries – beating out 16 rivals for the GOP nomination, including veteran senators and governors – can in part be attributed to that name ID and the celebrity status awarded to him after spending decades in tabloid headlines and several years at the helm of a hit reality television show.The celebrity nature of the election to come is compounded by the ratings boost awarded to television networks covering the spectacle.One Trump surrogate, with the candidate’s ear, already said on CNN Tuesday night he expects the contest with Clinton to be a “race to the bottom.”Clinton enters the race with polled vulnerabilities over her general likability, but with a clear demographic advantage: As the saying in Washington goes, Democrats have to be good but Republicans have to be perfect to win the White House in this day and age. The changing electoral makeup of the states that matter – Ohio, North Carolina, Virginia, Nevada, Colorado, Iowa and Florida, chief among them – heavily favors a Democrat, even after eight years of having one in office.Trump would have to win the support of a higher proportion of white men than Ronald Reagan did in 1984 to balance out his current deficits among every other demographic.And it remains to be seen whether he will succeed in patching the party together, when so much of its leadership considers him a narcissistic fraud barely qualifying as a Republican.The high-profile nature of the race and the means by which Trump has chosen to campaign thus far augur a messy fight with no boundaries for political discourse: Sexual exploits, accusations of criminality and other scandalous intrigue are set to dominate this election and marginalize discussion over America’s greatest policy challenges.