Democrats look to hold onto Virginia on Election Day 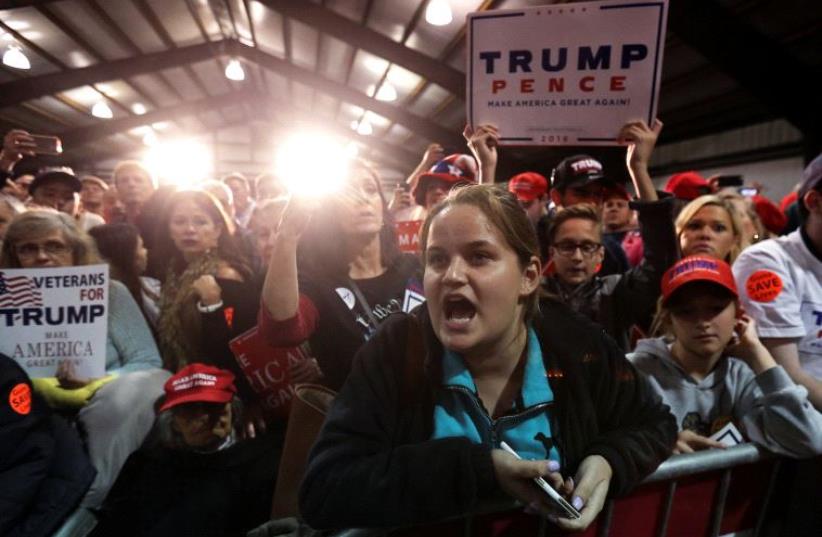 A protester yells as Republican presidential nominee Donald Trump speaks during a campaign rally in Leesburg, Virginia, U.S. November 7, 2016.
(photo credit: REUTERS)
Advertisement
ARLINGTON, Virginia – The sun didn’t rise until 6:43 a.m.in this vital Virginia county, and the polls didn’t open until 6 a.m. Early risers, however, began lining up at 5:30 a.m., many of whom waited about an hour to vote before they headed into Washington, DC, from this typically liberal suburb.In the last two election years, Virginia has proved to be an important state on the path to the 270 electoral college votes needed to win the election.President Barack Obama won the state in both of his campaigns, and Arlington County has been one of his strongest supporters.In his 2012 reelection, the state voted blue, giving just over half its votes to the Democrat.Obama won Virginia by 100,000 votes in a tightly contested race – winning 51% of the state’s votes, but 69% of Arlington’s votes.Back in March during the primaries, it appeared Clinton would take the state: She won the Democratic primary with 504,741 votes, while Trump barely won the state’s primary, with about 35% of the vote, garnering 356,840 votes – about 30,000 more than Marco Rubio.The twist is that a final poll showed the Democrat nominee ahead by just six points, 48% to Donald Trump’s 42%.John Shumway, a Virginia resident volunteering for the Democrat party outside an Arlington polling location, said that even if this county typically votes blue, he knows the numbers are of value, since northern Virginia typically swings the state to vote Democrat.“I guess I’m pretty concerned about a Trump presidency,” he said. “I wanted to do something today. I wanted to stay busy so I wasn’t so anxious.”He said this year he’s more active than usual, which was a sentiment expressed by many Democrats out at the polls on Tuesday. Some cited a fear of Trump, others a passion for Clinton and the prospects of voting in the first woman president in the country’s history.“She’s like my feminist hero,” said Christine Ford, a volunteer helping out in her first election while pursuing an MA in religious studies, following a degree in the same field at the Hebrew University of Jerusalem.Ford said she thought Clinton was also a strong candidate for religious freedoms, while Trump caters strictly to religious right-wing conservatives.Working alongside Ford was a lifelong resident of Virginia, Michelle Robinson, who typically helps with the elections but found herself more apt to do so this time around, particularly with regards to the candidates’ stances on women’s rights.“Clearly you have another candidate on the other side of this race that doesn’t have any respect for women, unless they look good,” Robinson said.Some female voters felt empowered by the ability to vote for a female president, Robinson noted, while others, like Kyle Turner, said she voted for her because she was the candidate she supported.“I think it’s very cool to vote for a woman for president, but it’s not why I voted for her,” said Turner, a bartender and recent Virginia transplant.This does not mean that Trump supporters were silent or inactive. More Trump signs could be found along streets and highways than ones for Clinton.One older lady wearing blue made sure to mention that she had voted for the Republican nominee.“I am a deplorable who voted for Trump,” said Carole Sands, a native New Yorker who has lived in Virginia for 30 years.She said her reason for supporting the Republican nominee was partially based on the eventual Supreme Court justice appointment, referencing the vacancy that will likely be filled within the next presidency.Sands also said she’s voting for the pro-Israel candidate and pointed to Clinton’s record over the past eight years in foreign policy.When asked why Trump is the pro-Israel candidate, her answer was succinct.“He said so,” Sands said, but added, “I’m from New York and I have many Jewish friends who are not voting the way I am. I don’t understand.”