The moment Khan stood alongside his wife at the Democratic National Convention in Philadelphia, advocates enthusiastically embraced him in their battle against Trump. 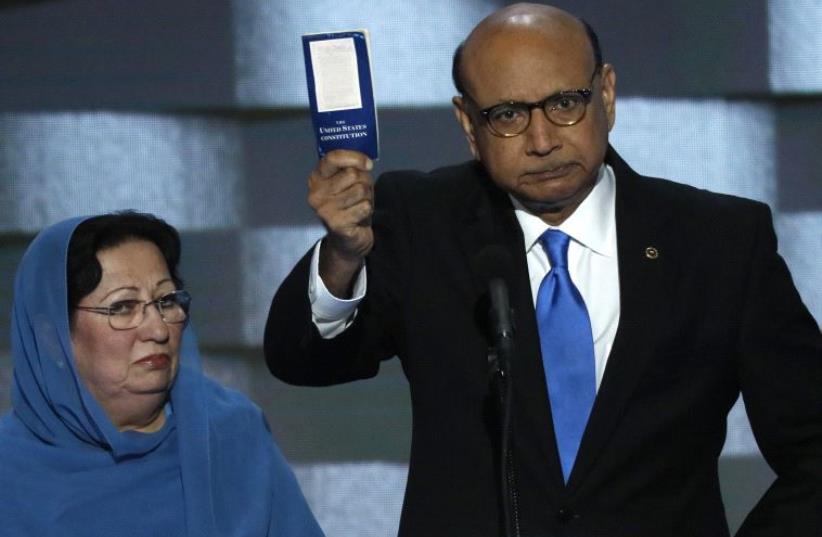 Khizr Khan, whose son, Humayun S. M. Khan was one of 14 American Muslims who died serving in the U.S. Army in the 10 years after the 9/11 attacks, offers to loan his copy of the Constitution to Republican US presidential nominee Donald Trump.
(photo credit: MIKE SEGAR / REUTERS)
Advertisement
WASHINGTON – A pocket-sized version of the US Constitution remained atop Amazon’s bestseller list on Tuesday, one week after the father of Humayun Khan, an American soldier who lost his life fighting in Iraq, challenged Donald Trump to read it.“Let me ask you: Have you even read the United States Constitution?” said Humayun’s father, Khizr, pulling out the edition he says he keeps stashed in his suit pocket at all times. “I will gladly lend you my copy.”The moment Khan stood alongside his wife at the Democratic National Convention in Philadelphia, advocates of religious liberty enthusiastically embraced him as the voice they had been searching for in their battle against Trump, the Republican nominee for president, who has called for a blanket ban on Muslims entering the US and for the monitoring of American Muslim communities and their mosques.“In this document, look for the words ‘liberty’ and ‘equal protection of law,’” Khizr said brandishing the Constitution.Trump has responded in recent days by leveling attacks against the Gold Star family, questioning whether Humayun Khan’s grieving mother, Ghazala, was compelled to remain silent at the Democratic convention because of her Muslim faith, and suggesting that Khizr opposed him because of his vow to crack down on Islamic extremists.Trump’s decision to attack the Khans invoked fury across the political aisle. But it has also brought to the surface an issue rarely debated at the top echelon of American politics: The value of religious liberty and pluralism in the country, and whether those principles are foundational to the American democratic experiment.“I think issues of race, faith and nationality have been part of the conversation in ways that we really don’t have historical precedent for,” Jonathan Greenblatt, national director and CEO of the Anti-Defamation League, told The Jerusalem Post in a phone call on Tuesday.Debates over racial integration in the 1960s and ’70s were hotly contested, Greenblatt acknowledged, but today’s discourse is complicated by voter concerns over the information economy and lone-wolf terrorism. Immigrants and Muslims are easy scapegoats for these challenging policy problems, he said.“Questioning the patriotism of this [Khan] family, or somehow suggesting that their faith makes them less American, is loathsome,” Greenblatt said, adding further that Trump’s attack on the Khans was “depraved and debases our democracy."“It’s not a Democratic or Republican issue – this is a matter of decency,” he continued. The ADL has fought against Islamophobia for decades, and will continue to do so throughout this presidential campaign, Greenblatt said.The Anti-Defamation League, a 501(c)(3) tax-exempt nonprofit organization, is not allowed to endorse or oppose candidates for elected office. But it is allowed to support or condemn ideas.The ADL’s mission is to fight against the defamation of the Jewish people, as well as bigotry in all its other forms, according to its website.The league played a critical role in the Civil Rights Movement of the 1960s, and has fought against Trump’s plan to ban Muslim immigrants. “We know what it’s like when they try to restrict refugees on the basis of their faith,” Greenblatt said.Suggesting a parallel between the two men, the ADL noted that his organization had fought against Sen. Joe McCarthy during the Red Scare in the 1950s.“It is our enduring commitment to pluralism that makes this country great,” Greenblatt said.