At an unscheduled stop, Clinton spoke to Jews in Florida about the importance of voting. 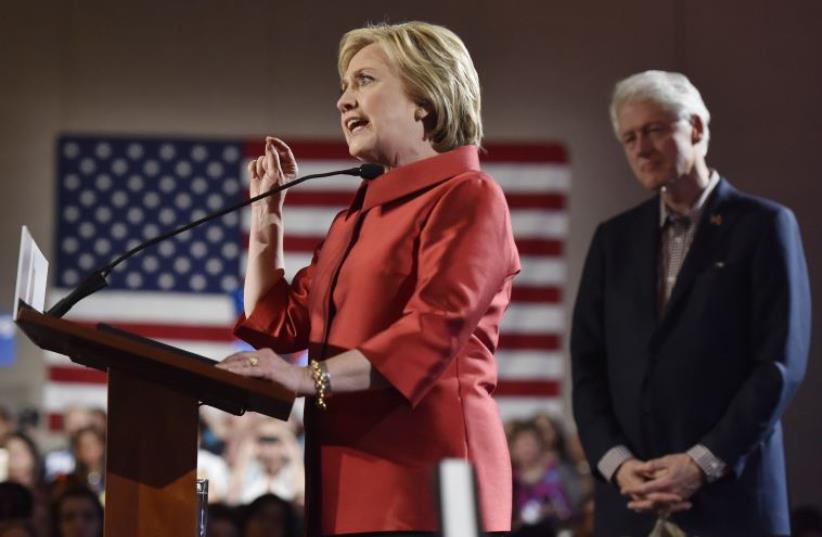 Democratic US presidential candidate Hillary Clinton speaks to supporters with her husband former president Bill Clinton (R) at her side in Las Vegas
(photo credit: REUTERS)
Advertisement
WASHINGTON – American political strife has become so brutal that Bill Clinton now longs for the days when US politics more closely resembled the famously fevered Israeli debates. The former president revealed these thoughts to a Jewish Center in Florida on Sunday, encouraging American Jews to vote against Donald Trump based on moral grounds.Speaking in Broward County, the husband of Democratic presidential nominee Hillary Clinton told Jewish Americans they had an especially important role in an election in which fundamental American values – pluralism, religious liberty and democratic republicanism – are at stake.“I could talk about all the issues in this election, but the real thing I want to say is every Jewish American should participate in this election, because this is about more than party,” he said. “If there is any group of people in this country that should understand the threat to the fundamental character of the nation and the future of our children and grandchildren posed by the choice in this election, it should be members of the Jewish community.No one should sit it out.”Clinton attempted to explain the phenomenon that has led to the rise of Trump in economic terms: Globalization of the US economy and the financial crisis in 2008 fostered an “us versus them” political environment, the former president said.These angry movements, which he characterized as historically xenophobic, have afflicted Europe repeatedly for centuries and have often targeted Jews.Clinton made the unscheduled stop to the Century Pines Jewish Center in Pembroke Pines, in an attempt to motivate a community that has repeatedly proven critical to Democratic victories in Florida.The Clinton campaign hopes to drive up Jewish Floridian voter turnout, and last week dispatched former Connecticut senator Joe Lieberman to rally the community.“Disagree the way Israelis do: Fight like the devil over the things we disagree with but in the end have this process by which we come together and we get the show on the road and move into the future and go on and remain a beacon of hope and freedom to the rest of the world,” Clinton continued.“That’s more important than any specific issue.”