“They fear that the real estate magnate (Trump) does not see the extent to which Washington and the Arab Gulf states mutually benefit from the US-GCC alliances.” 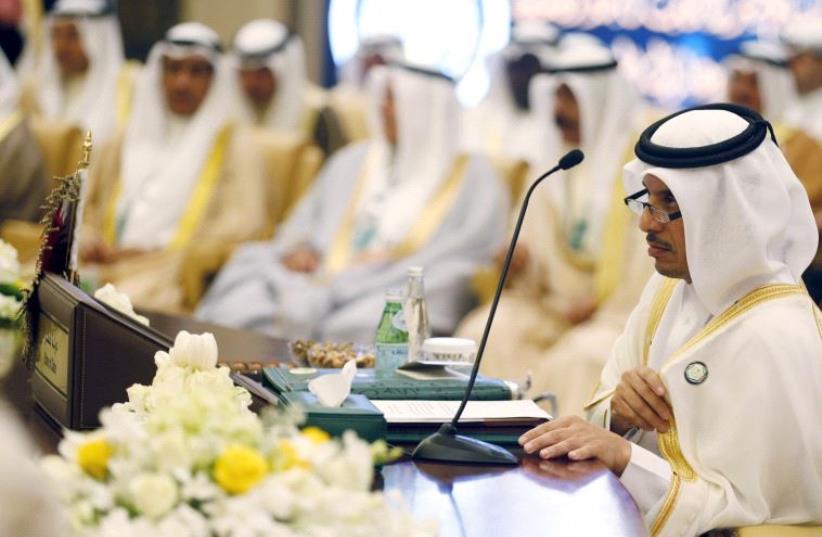 Bahrain's Interior Minister Rashid Bin Abdullah Bin Hamad al-Khalifa attends a meeting of Gulf Cooperation Council (GCC) Interior Ministers [File April 2016]
(photo credit: REUTERS)
Advertisement
CAIRO, Egypt – This week’s Gulf Cooperation Council (GCC) summit in Bahrain provides an eye-popping glimpse into the shifting sands of Middle East politics in the wake of Donald Trump’s victory.“Trump’s election has heightened uncertainty regarding the future direction of global politics,” said Anwar Gargash, foreign minister of the United Arab Emirates. “There are certainly more exclamation marks than answers." The two-day summit comes as the Gulf monarchies – Bahrain, Kuwait, Oman, Qatar, Saudi Arabia and the United Arab Emirates – grapple with anxiety over oil prices and the success of Iranian-supported forces in Syria and Yemen.The incoming Trump administration isn’t calming their nerves. The American president-elect has confounded kings and princes on the Arabian Peninsula with hostile rhetoric about Muslims and resentful rants about the US-GCC strategic relationship.Gulf leaders remember Trump’s claim that Kuwait “never paid us back” for its 1990 liberation from Iraq and that Saudi Arabia “wouldn’t exist” without American assistance. Trump’s assertions notwithstanding, both counties remitted more than $16 billion to the United States Treasury after the first Iraq war.“The ‘America First’ talk about making traditional allies of Washington – not only in the Gulf region but also in Asia and Europe – pay more for the security umbrella which America provides them has naturally unsettled GCC officials,” Giorgio Cafiero, chief executive of Gulf State Analytics, a strategic consulting firm told The Media Line. “They fear that the real estate magnate (Trump) does not see the extent to which Washington and the Arab Gulf states mutually benefit from the US-GCC alliances.”The Gulf States are dependent on the US for their security and American weapons manufacturers have profited handsomely from selling armaments to the GCC.Since May 2015, the US has sold $33 billion worth of weapons to the US’s Gulf allies.Yet Trump’s hostility toward President Barack Obama and Europe’s nuclear deal with Iran – and his selection of former US Central Command James N. Mattis as defense secretary, point to an eventual meeting of minds between Gulf state leaders and the new president.Mattis led a Marine division to Baghdad during the 2003 invasion of Iraq and more recently argued that that Iran is the greatest threat to peace in the Middle East.He also has recognized the importance of the GCC for American strategic interests.“Saudi Arabia, the United Arab Emirates, and the rest of the Gulf Cooperation Council can reinforce us if they understand our policies and if we clarify our foreign policy goals beyond Iran’s nuclear weapons program,” said Mattis in testimony last year to the US Congress’s Armed Services Committee.Worried about Iran and the loyalty of their own pro-Iranian Shi'ite minority populations, the Saudis and the Bahrainis are pushing the GCC to pursue a more coordinated response to both internal and external threats. “After the Shi'ite protests in some of the GCC countries, such as Bahrain, in the recent past, the other GCC members were faced with a serious dilemma of how to deal with two different but potentially equally significant threats to national security and stability: the Islamists, and the Shi'ites,” said Shehab Al Makahleh Political Analyst and Co-founder of Geostrategic Media.“As Shi'ites are pro-Iran, the GCC’s arch-enemy, with Oman being an exception, the other Gulf States chose between two evils, and decided to support the Islamists, for the time being, in order to counter the Shiites and by extension Iran,” Al Makahleh told The Media Line.Now Manama and Riyadh are leading an effort to morph the GCC into a “Gulf Union” that draws inspiration from the European Union.“The transformation of the GCC into a Gulf Union is essential to address security problems and economic challenges, as well as other serious issues confronted by the region,” said Bahraini Prime Minister Prince Khalifa bin Salman Al-Khalifa.Al-Khalifa sees the Gulf Union proposals as a step towards forming a more powerful regional bloc with unified economic programs, joint military operations and political policies common to all member states.“Particularly following the election of Donald Trump as president, the successes of the far-right in elections in Europe and the spread of Islamophobia across several countries, I’d like to see a Gulf political and economic vision based on the common agreements of the member states,” said Hama al-Amer, a former GCC undersecretary. “This will make the GCC the sixth largest economic bloc in the world and strengthen its international economic power.”Ironically, Britain which has decided on exiting the multistate European Union, is the Western power most engaged with Gulf leaders as they embark on a process of political and security consolidation. British Prime Minister Theresa May is the only European leader to flying to Bahrain for the summit.“The fact that May will attend this high level meeting signals that the British are back to the region to play a more assertive role,” said Al Makahleh.For more stories from the Media Line click here