Eight US election races the Jewish community is watching in 2016

It remains to be seen how Israel and the consequences of the nuclear deal reached with Iran last year will play out in a number of local and state elections later this fall. 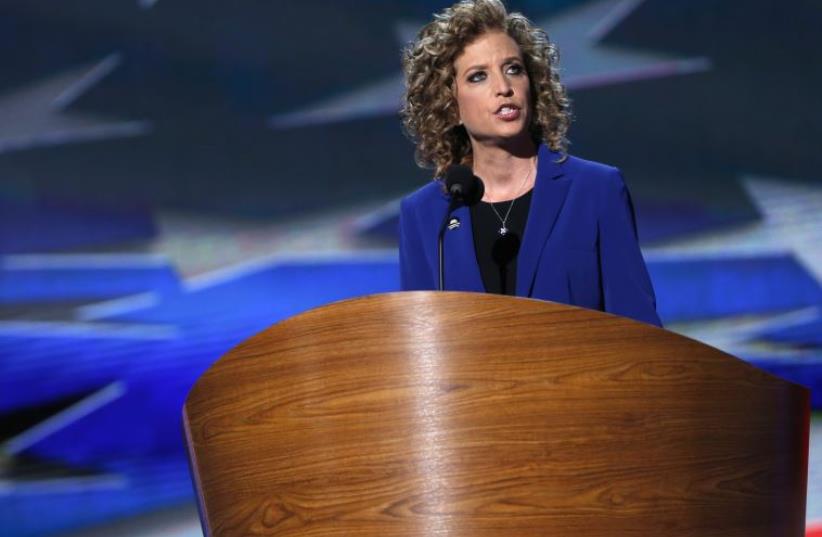 Democratic Party Chairwoman Debbie Wasserman-Shultz
(photo credit: REUTERS)
Advertisement
NEW YORK – Middle East policy is only one of several core issues in this sensational, character-driven presidential race between Democrat Hillary Clinton and Republican Donald Trump. But on the local level in a handful of states and districts, Israel and the consequences of the nuclear deal reached with Iran last year remain top of voters’ minds. Here are eight races the active Jewish-American community will be closely watching come November.

8. Replacing Barbara Boxer - US Senate, CaliforniaThe departure of Barbara Boxer, California’s Jewish junior senator since 1993, will go noticed in Washington once she retires at the end of this term. Boxer, who chose not to run for reelection, was author of the 2014 US-Israel Strategic Partnership Act (which expanded security cooperation, increased funding for research programs and elevated Israel’s status as a US ally to “major strategic partner”); fought for years against fierce headwinds to pass a US-Israel visa waiver program; and repeatedly supported increases in foreign aid to the state.She has also been a vocal critic of the Netanyahu government, a reliable ally of the Obama administration, and an early advocate for the nuclear deal reached with Iran last year.Neither candidate running to replace her is Jewish. But in an interview with a local outlet published in June, Kamala Harris – Boxer’s most likely successor – described herself as a robust supporter of Israel’s security. She characterized the nuclear deal as “by no means a perfect compromise,” and said that her support for the agreement is conditioned on “a deep commitment to the safety of Israel.”Harris does not support actions imposed from without, intended to cajole Israel and the Palestinians to negotiations toward a two-state solution, and agrees with Netanyahu that Palestinian leadership should recognize Israel as a Jewish state.

7. Lois Frankel and Ted Deutch swap seats - US House Florida’s 21st and 22nd Congressional DistrictsRedistricting has forced Ted Deutch and Lois Frankel, two of 18 Jewish members of the House, effectively to swap seats in Congress. Representing some of the most heavily populated Jewish communities in the country – Broward County, northern Palm Beach, Wellington to Pompano Beach – they both opposed the Iran deal, and have repeatedly supported increased foreign and defense aid to Israel.Both appear safe in their seats.6. Marco Rubio reelection campaign - US Senate, Florida The Republican presidential candidate who spectacularly lost his home state of Florida to Trump last spring limped home with nothing to run for: He had announced publicly, months earlier, that he would not seek reelection.But that changed after his presidential primary loss, and incumbent Marco Rubio is back in the fight.Rubio casts himself as a staunch ally of Israel, and has enjoyed support from AIPAC leadership in the past. He criticized Trump as “anti-Israel” after the newly minted GOP presidential nominee called for US “neutrality” in the Israeli-Palestinian conflict, and has often attacked the White House for its handling of the US-Israel relationship, which he promised to repair should he have succeeded in his bid.He now runs in an open field of primary candidates: Florida’s August 30 primary features, between Democrats and Republicans, 10 candidates to choose from.Making noise on the other side is Alan Grayson, a House member who supported the Iran deal and was the first Jewish congressman to endorse Bernie Sanders’s bid for president earlier this year.Should Grayson win the Democratic primary-- he faces a fierce battle with another House member, Patrick Murphy-- he would offer a stark contrast to Rubio in the general.5. John McCain vs Ann Kirkpatrick - US Senate, ArizonaThe fact that John McCain, the Republican nominee for president in 2008 and an acclaimed war hero, is so fiercely fighting for reelection makes this a race to watch for all constituencies.But the Jewish-American establishment will be monitoring closely to see whether one of the most vocal proponents of an ironclad US-Israel alliance falls to his political opponent, Rep. Ann Kirkpatrick, who supported the Iran deal last year with gusto.“As an American and a supporter of Israel, I have backed tough sanctions against Iran, but now is the time to launch a new chapter of vigorous enforcement,” Kirkpatrick said when endorsing the agreement.She characterized the deal at the time as an “historic and critical diplomatic course against danger and chaos.”The loss of McCain in the Senate would spell the loss of one of the most prominent conservative foreign policy voices on Capitol Hill – a voice that has repeatedly harmonized with the Netanyahu government, on issues ranging from Middle East peace to policy in Syria, Iran and the scourge of radical jihadism. Kirkpatrick’s victory would be a milestone for those opposed to that paradigm of foreign policy thinking and would likely be part of a larger wave of Democratic victories sweeping the party back into Senate control.

4. Bob Dold vs Brad Schneider - US House, Illinois’s 10th Congressional DistrictThis one is a rematch: Brad Schneider, a Jewish figure, is fighting to retake his seat back from Bob Dold in a district that is roughly 12 percent Jewish in population.Schneider has the support of the National Jewish Democratic Council, despite the fact that – in a contested Democratic primary fight – he announced opposition to the nuclear deal, which NJDC supported. Schneider calls on his website for Congress to “repair” the US-Israel relationship, and considers himself both a member of AIPAC and a supporter of J Street. “Both organizations have the same goals,” he told a campaign town hall.Dold, for his part, believes “the national security of the United States is directly tied to the strength and security of Israel,” according to his website. The race is considered too close to call.

3. Lee Zeldin vs Anna Throne-Holst - US House, New York’s 1st Congressional DistrictZeldin is the only Jewish Republican in Congress and, consequently, the only Jewish member who has endorsed Trump for president.He faces one of the most expensive battles for a House seat nationwide – estimated to cost $15 million by November – in his fight to stave off Anna Throne-Holst, a challenger who had previously worked as supervisor for the town of Southampton and in the UN Department of Peacekeeping.Zeldin faced criticism from his colleagues last week for suggesting President Barack Obama is dually loyal to the United States and to an unspecified, unproven, yet certainly foreign and likely vaguely Muslim heritage, after reporters began questioning why a $400m.US-Iran Hague settlement apparently coincided with Tehran’s release of American political prisoners.“When deals like this are cut,” Zeldin said in a formal press release, “one has to truly wonder whether the president has no idea what he is doing, or if he knows exactly what he is doing and is playing for some other team.”While the incumbent was a fierce opponent of the Iran deal – and of virtually all policies of the Obama administration – his challenger endorses the nuclear agreement, and supports a two-state solution between Israel and the Palestinians.Throne-Holst is benefiting from fund-raising by the political action committee of two-state lobby J Street, known as JStreetPAC, based on her support for a “twostate solution and a diplomacy- first approach” as well as her support for the Iran deal and continued Israel aid.2. Mark Kirk vs Tammy Duckworth - US Senate, Illinois This Senate race is a battle between the American Israel Public Affairs Committee and J Street.Kirk, a darling of the AIPAC crowd, will face a popular challenger in Duckworth, who waxed off J Street’s successes in lobbying for the Iran deal at its Democratic National Convention reception last month.Kirk is one of the highest- profile sitting senators facing a tough reelection battle and has been a loud critic of the nuclear deal in Congress.The issue has thus become a flashpoint of the campaign.After signing a controversial congressional letter to Iran’s leaders, likening the JCPOA to British appeasement of Nazi Germany and claiming that Obama sold out Israel for Iran, Kirk drew flak from Duckworth, who called his actions “entirely inappropriate” and praised the deal as a victory for the cause of nuclear non-proliferation.“Sometimes the best solution is not more weapons,” Duckworth, an Iraq War veteran, said at the J Street event last month, speaking of America’s role in brokering a two-state solution.“Sometimes the best solution is actually entering negotiations and find a way to work together in peace.”While Kirk promotes his connections to AIPAC on his website, Duckworth enjoyed a J Street fund-raiser in April.This campaign may be the most direct competition between the two lobbies held nationwide.1. Debbie Wasserman Schultz vs Tim Canova - Democratic Primary US House, Florida’s 23rd Congressional DistrictWasserman Schultz represents one of the most Jewish- populated districts in the country and, up until last month, served as one of the most senior Jewish members in Congress as chair of the Democratic National Committee.Her seat is safely blue, but it is her Democratic primary opponent who is posing a significant challenge: Tim Canova, an early and aggressive opponent of the nuclear deal reached with Iran last year.Wasserman Schultz has already enjoyed heavy-hitter, in-person reinforcement from Obama, Vice President Joe Biden and Hillary Clinton, the Democratic nominee who won Florida’s 23rd district in her primary battle against Vermont Sen. Bernie Sanders by a margin of nearly three to one. The race may be close nevertheless, as Canova is well financed and has campaigned aggressively to upend her with Sanders’s help.Canova now supports “full implementation” of the Joint Comprehensive Plan of Action. But he has allied himself with Democratic opponents of the nuclear deal – which Wasserman Schultz reluctantly endorsed – and has been bolstered by an ad campaign in her district targeting her for that support. One TV ad charges voters to encourage her to “stop siding with Iran,” and a pamphlet, distributed this week, accuses her of “waffling” on her beliefs in service of her party bosses.Canova’s decision to highlight opposition to the Iran deal reflects discontent within the Democratic Party – certainly among Florida’s Democratic Jewish voters – over how the nuclear deal was ultimately packaged. If any race is a measure of Iran deal popularity within the Jewish community, this one is it.Their primary takes place on August 30.