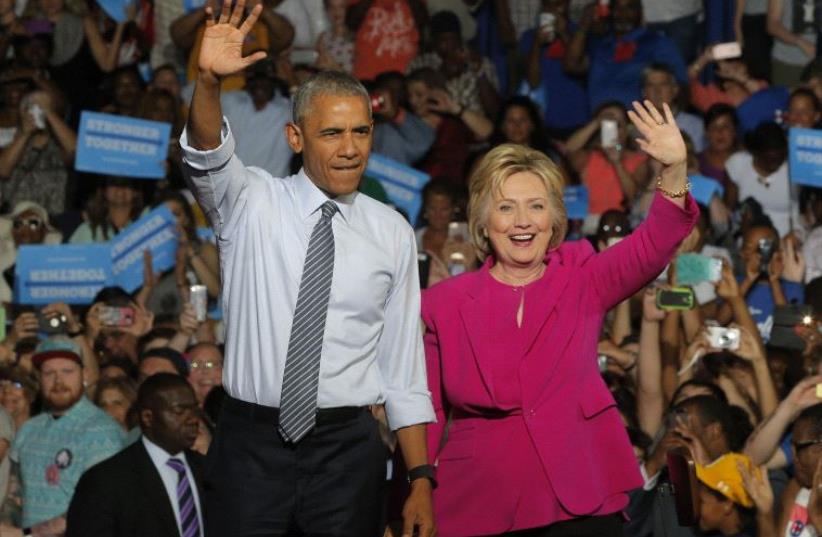 Barack Obama and Hillary Clinton at a campaign event
(photo credit: REUTERS)
Advertisement
WASHINGTON – One prominent Florida congressman has a message for his Jewish constituents on the matter of Hillary Clinton and Israel: Expect a substantial public shift away from the posture of the Obama administration should she win the White House on November 8.Ted Deutch, who is running for reelection in the newly drawn 22nd district of Florida, described a statesman, who he came to know during her time in the Senate, deeply committed to Israel’s security – one who understands its challenges, from the Palestinian question to ongoing concerns over Iran’s nuclear program.“There are always lessons that are learned from experience – going forward, its a matter of recognizing what’s transpired, and figuring out how to strengthen the relationship,” Deutch said in an interview, regarding Clinton’s experience as secretary of state under US President Barack Obama. “But it’s not just a question of whether lessons were learned. It’s a question of where personal relationships will lead her and will lead the administration. And over decades, she’s established deep bonds with Israeli officials across the political spectrum, as well as the Israeli people.”Deutch’s constituents have expressed concern to him over the Obama administration’s public handling of its relationship with Israel, specifically over the Iran nuclear deal, which he opposed when it came to a vote last year.“Because of these bonds that exist,” Deutch continued, “I think there’s a willingness to sit and engage in meaningful discussions about the needs that Israel has, both in terms of immediate security needs and, in the longer term, necessary steps toward a two-state solution.”Representing Broward and northern Palm Beach counties – a critical region in the most important electoral swing state, and in which roughly 15% of residents are Jewish – Deutch said Clinton has a demonstrated record on issues concerning Israel and the Jewish world.She has tenaciously fought antisemitism on a host of fronts, including the BDS movement against Israel, he said. He noted that her experience as a senator from New York was a crucial period, during which she learned the dimensions and concerns of the American Jewish community.Deutch seems to believe that Clinton will help to prevent Obama from proceeding to the UN Security Council on parameters for a two-state solution – a move that she has ruled counterproductive, but that he is reportedly considering.“On efforts to avoid direct negotiations by going to the Security Council, she’s been clear why that’s not an approach that’s productive for a lasting peace,” the congressman said.Deutch recalled a dinner he had with then-senator Clinton in 2007 with roughly a dozen people, during which the primary topic of conversation was Iran. Clinton engaged with the “substance and sophistication” Deutch hopes for from his potential commander-in-chief on an issue of such grave concern to the Jewish state, he said.“I think secretary Clinton understands well that while the nuclear deal, the JCPOA [Joint Comprehensive Plan of Action], rolls back the clock and lengthens the time for Iran to produce a sufficient amount of uranium to build a nuclear weapons, that that’s not the ultimate goal,” he said. “The ultimate goal is to prevent Iran from being in a position where it can dash toward a weapon.”“When I think back on the level of understanding that she had all those years ago – to know that even then, these were issues that mattered to her,” he continued, “I think she understood, with the kind of sophistication that really matters to the pro-Israel community. And it gives me a kind of security that I need to feel about our president.”