Eizenstat cautioned Clinton to avoid the sort of publicly contentious relationship that developed early on between the Israeli government and the Obama administration. 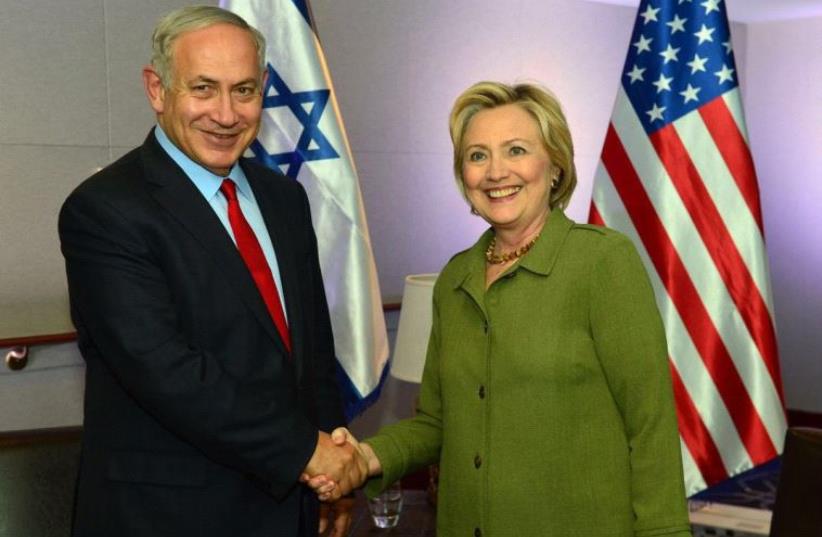 Prime Minister Benjamin Netanyahu and Democratic nominee Hillary Clinton
(photo credit: KOBI GIDEON/GPO)
Advertisement
WASHINGTON – At a small gathering last month of roughly 20 policy makers, Stuart Eizenstat whispered in Hillary Clinton’s ear that he had to run off early to catch a flight. She rose to thank him publicly before he left.“I want everyone to know what Stu has done for Holocaust survivors,” she told her guests.“He’s done more than anyone has done.”It was a memorable moment for Eizenstat, who has known Clinton for nearly 25 years and who describes her as a woman dedicated to her loyal staff, attentive to those around her and genuinely caring of the issues important to him – issues concerning the Jewish world.As both deputy treasury secretary and under secretary of state for economic, business, and agricultural affairs in the former Clinton administration, Eizenstat grew close with Hillary.She would call him without prompting to check in on his work as he would navigate restitution negotiations with European nations, and while they were at it, he would fill her in on his work to develop industrial zones in the Palestinian territories.“On Holocaust and Jewish issues, besides being senator from the state with the largest number of Jews, she has a feel for Israel and for Jews that’s in her kishkes,” Eizenstat said in an interview. “I mean, I saw it.And when we talked, there was an intensity of interest for doing justice to Holocaust victims and helping Israel. It’s not just an intellectual interest.”Eizenstat, who has served as a special adviser on Holocaust issues to US President Barack Obama, was part of the official American delegation to the funeral of Shimon Peres last month. His name circulated in the news recently after his emailed advice to Clinton advisers was released in a Wikileaks dump.The leaks revealed Eizenstat calling on Clinton’s campaign to come down strong on several of the trickier provisions of the Iran nuclear deal – released shortly after the former secretary of state announced her second run for the presidency.Speaking with The Jerusalem Post, he was quite willing to share those views in public, expressing his belief that Clinton’s views of the deal are effectively his own.“I have the same concerns that she has, which is what you do in the out years – how to handle sanctions and how to apply new sanctions for non-nuclear activity,” he said.“I think she’s a very tough cookie when it comes to Iran, and I don’t think she’s going to tolerate a lot of slippage.”Eizenstat cautioned Clinton to avoid the sort of publicly contentious relationship that developed early on between the Israeli government and the Obama administration – advice that Clinton is hearing, her top aides told the Post last week.“Do things in private – don’t put him in a corner,” Eizenstat said.“Don’t say things publicly that are difficult for him to do with his coalition. Use private persuasion.And I think that every American president has and will have tactical differences with Israel – I mean, go back to Truman imposing an arms embargo.”“But if you shoot for the moon at the beginning,” he said, “you’re going to get a dud given the state of Israeli politics, and she has a deep understanding of those politics.”