Peres was a man of psalms, Clinton says

In a phone call with Jewish community leaders Clinton spoke of Peres, her recent meeting with Netanyahu and wished American Jewry a happy and healthy new year. 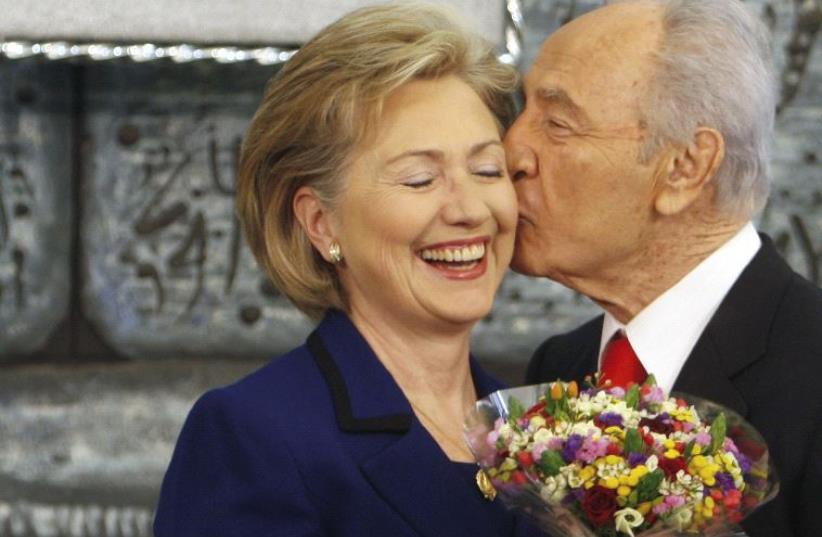 Shimon Peres kisses US Secretary of State Hillary Clinton as he gives her flowers after their meeting in Jerusalem, March 2009
(photo credit: REUTERS)
Advertisement
WASHINGTON -- Democratic presidential nominee Hillary Clinton recalled fond memories of a man she called her friend, the late Shimon Peres, on a phone call with Jewish community leaders on Thursday.On the call– an opportunity for the Democratic candidate to wish American Jewry a happy and healthy new year– Clinton said she was saddened personally to hear of his death on Tuesday night."When he spoke it could be like listening to a psalm, and I loved sitting and listening to him," Clinton said of Peres, a founding father of the Jewish state. "I know not only Israel but the United States and the world will miss him."Her husband, former president Bill Clinton, is in Israel to pay his respects. He will be joined by US President Barack Obama and a delegation of 30 other US dignitaries at Peres' funeral on Friday morning in Jerusalem.Clinton recapped her meeting with Prime Minister Benjamin Netanyahu on Sunday in New York, stating the two "reminisced" and discussed the Broadway show Hamilton, which Clinton herself has now seen three times."I made it clear to him that if I am so fortunate to become your president, I will always stand up for Israel's security," she said, and "continue to work toward peace." She also vowed to fight a growing movement to delegitimize Israel known as the boycott, divestment and sanctions (BDS) movement.Clinton's Jewish outreach director, Sarah Bard, facilitated the call, and asked participants to encourage their community members to register to vote. The Clinton campaign is hoping for high turnout from the Jewish community in critical battleground states, based on historic figures that show consistent Jewish support for Democratic candidates."Shanah tovah to all of you, to your loved ones," Clinton said at the end of the phone call. "I hope that this will be a good year not only for you, but for our country."