Kasich tests the efficacy of a positive campaign

“There’s no question, New Hampshire has changed me,” Kasich said, beginning one of his last stump speeches in the Granite State. 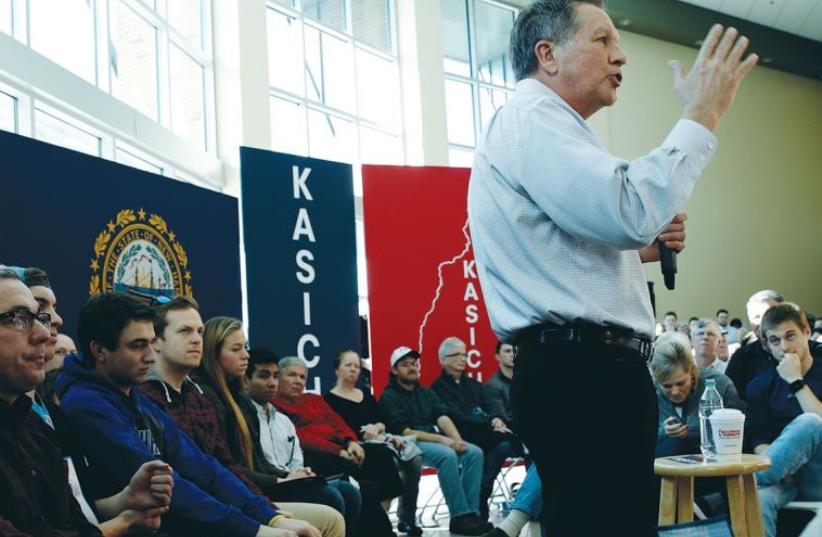 US REPUBLICAN PRESIDENTIAL candidate Ohio Gov. John Kasich speaks to voters in Nashua, New Hampshire
(photo credit: REUTERS)
Advertisement
NASHUA, New Hampshire – At the entrance of a community college here, Ohio Gov. John Kasich stood waiting to be introduced at his presidential campaign rally on Sunday. He shook hands, as he has at over 100 town hall meetings in New Hampshire since entering the race; he smiled for selfies with volunteers.And when his name was called, and a chant began, he stayed back with a young girl who had asked for a moment and an autograph.“There’s no question, New Hampshire has changed me,” Kasich said, beginning one of his last stump speeches in the Granite State. The Republican primary race, tight as residents prepare to cast their ballots on Tuesday, has ebbed and flowed in Kasich’s favor.A win here is a must for the Ohio man, who has served as governor since 2011 and, before that, in the US House of Representatives for nearly 20 years. But how to define a win is relative to the campaign.Kasich must exceed outside expectations and match his own, by garnering a substantial percentage of the vote reflective of his near-constant presence here.The candidate effectively skipped Iowa and put all of his political chips on New Hampshire, where victories have revived the campaigns of past Republican moderates, including those of former Arizona senator John McCain and former Massachusetts governor Mitt Romney.Repeatedly questioned on his own moderate stance – last week, the candidate joked he had more support from Democrats than from Republicans – Kasich has pushed back against the notion that a unifying message is political suicide.“We have to have people operating as Americans, not as Republicans or Democrats,” he said at the town hall meeting on Sunday. “That’s just not working for our country.”Throughout his campaign, Kasich has run as the nice guy, airing television ads that have castigated his opponents not for their past positions, statements or financing, but for their decisions to go negative themselves.“Why don’t you just all take down your negative ads and tell people what you want for the next 48 hours,” Kasich said on Sunday. “I want to take a unifying, positive message – upbeat.“I want to get the country’s spirit back,” he said.Kasich is not the only gubernatorial candidate with his political career on the line here in New Hampshire. New Jersey Gov. Chris Christie and former Florida governor Jeb Bush are both fighting against the same fate – and doing so over the same votes.According to a polling average collected by RealClearPolitics, Kasich is in a race for third place, pulling in 12 percent of support, compared with 11% for Texas Sen. Ted Cruz. Businessman Donald Trump leads the pack with more than 30%, according to that poll average, with Florida Sen. Marco Rubio ranked second with roughly 15%.Conscious of the possibility of a loss, Kasich appears aware he may soon be returning to the state house in Columbus, Ohio. Asked for his plan to address New Hampshire’s epidemic of drug use, he pointed to several local state government initiatives and said he would likely bring them home with him.“I’m gonna do that in Ohio,” he said.