Establishment figures in the party are grappling with the fact that a reality television star and former Democrat is their standard-bearer. 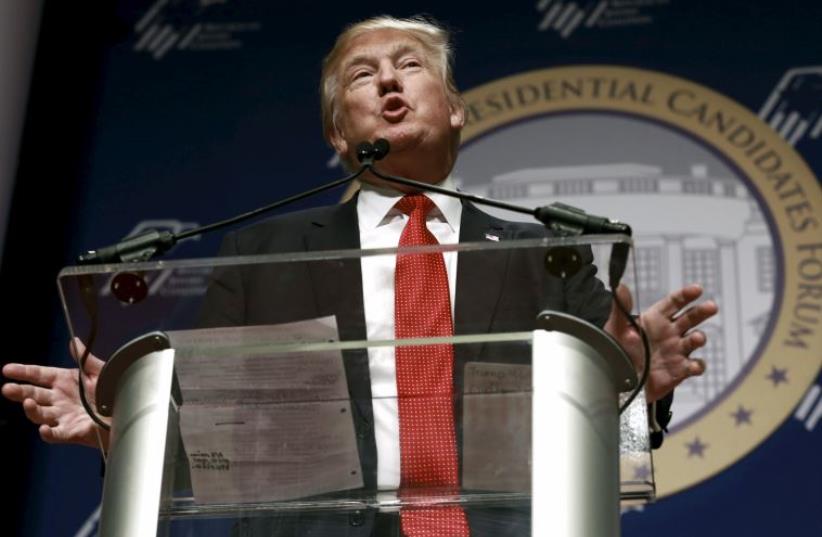 Republican presidential candidate Donald Trump speaking at Republican Jewish Conference- Dec. 2, 2015
(photo credit: REUTERS)
Advertisement
Now that Donald Trump has effectively clinched the Republican presidential nomination, establishment figures in the party are grappling with the fact that a reality television star and former Democrat is their standard-bearer.Republican Jewish leadership is dealing with the same issue and reacted on Thursday with congratulations to the New York businessman for his success.But in a statement released after Trump’s rivals dropped out of the race on Wednesday, the Republican Jewish Coalition uncharacteristically withheld praise for the likely candidate or his qualifications.“The Republican Jewish Coalition congratulates Donald Trump on being the presumptive presidential nominee of the Republican Party,” the group said. But the statement proceeded not to argue for Trump’s attributes, but against those of Hillary Clinton, the presumptive Democratic nominee.“Secretary Clinton has proven time again through her record and her policies that her candidacy will compromise our national security, weaken our economy and further strain our relationship with our greatest ally, Israel,” the statement read.Some of the RJC’s prominent members and supporters expressed themselves on Twitter shortly thereafter, split between accepting Trump as their nominee and absolutely rejecting the prospect.“There’s a lot about Donald Trump that I don’t like, but I’ll vote for Trump over Hillary any day,” said Ari Fleischer, a veteran of the George W. Bush administration.One prominent conservative writer, Jennifer Rubin from The Washington Post, said the RJC would be “dead to me” if it embraced Trump or worked to secure his election.Trump secured the title of presumptive GOP nominee after Texas Sen. Ted Cruz and Ohio Gov. John Kasich – his last two opponents in the race – suspended their campaigns this week.In presidential election years, roughly 70 percent of Jewish Americans vote Democratic nationwide – including in swing states such as Florida, where the small demographic plays a crucial role. But challenged to make inroads with far larger demographics such as blacks, Hispanics and women, Trump will need to retain as much support as he can – support that is typically taken for granted by Republican presidential candidates.That will include Republican Jewish voters – as few in number as they may be.