'Justice for Palestinians cannot be attained without the lifting of the occupation,' Cornel West was quoted as saying by 'The New York Times' on Wednesday. 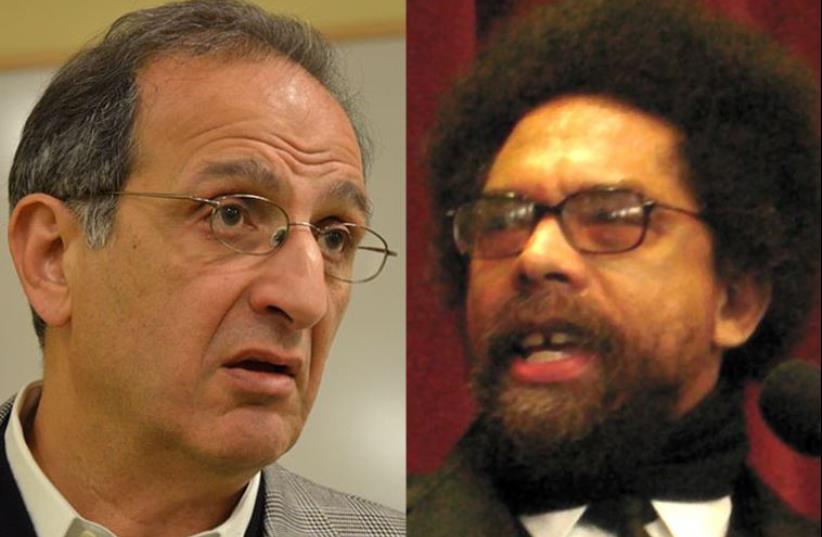 James Zogby‏ and Cornel West‏
(photo credit: ESTHER/BANKINGBUM/WIKIMEDIA COMMONS)
Advertisement
The Democratic Party is facing a possible dilemma as supporters of the two candidates vying for the nomination gear up for a debate on what to do with its Mideast policy.The Israel issue is threatening to tear the party apart as Bernie Sanders, the Vermont senator who has mounted a considerable presidential campaign that has earned him greater clout within the left-wing camp, has tapped two individuals to a key committee who seek to insert language into the Democratic platform that some see as hostile to Jerusalem.The Democratic Party platform drafting committee is top heavy with veterans of political battles over Israel - some friendly, some critical, and including at least one major backer of the Boycott, Divestment and Sanctions movement.The Democratic National Committee named the committee on Monday, a day after reports emerged that Sanders, an Independent senator from Vermont running for the Democratic Party’s presidential nomination, wants the platform to elevate the issue of Palestinian rights.The names signal that the robust debate on Israel that has rattled the party’s relationship with the mainstream pro-Israel community over the past two years will continue through the party convention in Philadelphia in July.Sanders, the first Jewish candidate to win major party nominating contests, named five of the committee’s members, while Hillary Clinton, the former secretary of state and front-runner in the party’s presidential primaries, named six. The remaining four were named by the DNC’s chairwoman, Rep. Debbie Wasserman Schultz, D-Fla., among the most prominent Jewish leaders in the party.Three of the Sanders backers on the committee - Cornel West, a philosopher and social activist; James Zogby, the president of the Arab American Institute, and Rep. Keith Ellison, D-Minn., the first Muslim elected to Congress - are known in part for their criticisms of Israel.West is a prominent BDS backer and Zogby has spoken forcefully against attempts to marginalize the movement. Ellison has called for greater consideration of Palestinian rights, but also has close ties to his home state Jewish community and says Israel’s security must be taken into account.The standout appointment is West, a fiery speaker who has called the Gaza Strip “the ‘hood on steroids” and, in 2014, wrote that the crimes of Hamas “pale in the face of the US supported Israeli slaughters of innocent civilians.”Zogby and Ellison are longtime insiders who have taken leadership roles in the party, so their inclusion is not extraordinary.Among the six Clinton backers is Wendy Sherman, the former deputy secretary of state who was a lead negotiator in the Iran nuclear talks. Sherman, who has spoken lovingly of her involvement in Jewish life in suburban Maryland, was wounded by the tough criticisms of the deal from Israel’s government and centrist pro-Israel organizations.“Justice for Palestinians cannot be attained without the lifting of the occupation,” West was quoted as saying by The New York Times on Wednesday. West has also been quoted as saying that Prime Minister Benjamin Netanyahu was a “war criminal” and that “the role of money and lobbies makes it difficult for there to be a candid dialogue” about Israel.Zogby, who heads the Arab American Institute, is viewed as a Democratic insider. He has spent years advocating on behalf of the Palestinians.He told The New York Times that the shift in the party platform on Israel is a reflection of the change in views among the Democratic constituency.“Any honest assessment would say that the debate on this issue has shifted over the last 30 years and the platform has reflected that but lagged slightly behind, and it’s now time to catch up,” Zogby said. “Clearly most Democrats agree. But we will see what happens.”Hillary Clinton, who is on the verge of locking up the nomination, will insist that the party platform reflect her views on the Israel-Palestinian matter.“Hillary Clinton’s views on Israel and the US-Israel relationship are well documented, and she’s confident that her delegates will work to ensure that the party platform reflects them,” Jake Sullivan, Clinton's foreign policy adviser, said.The drafting committee presents the document to the full platform committee, which votes on it during the convention. Usually there are few objections. In 2012, however, the drafting committee omitted from the draft platform recognition of Jerusalem as Israel’s capital. New language including the recognition was passed during the meeting of the full committee, but not without objections and boos.All four of the Congress members on the drafting committee – Cummings, Lee, Ellison and Rep. Luis Gutierrez, D-Ill., a Clinton appointee – are endorsed by the political action committee affiliated with J Street, the liberal Middle East policy group.