Trump says was being 'sarcastic' in Russia hack comments 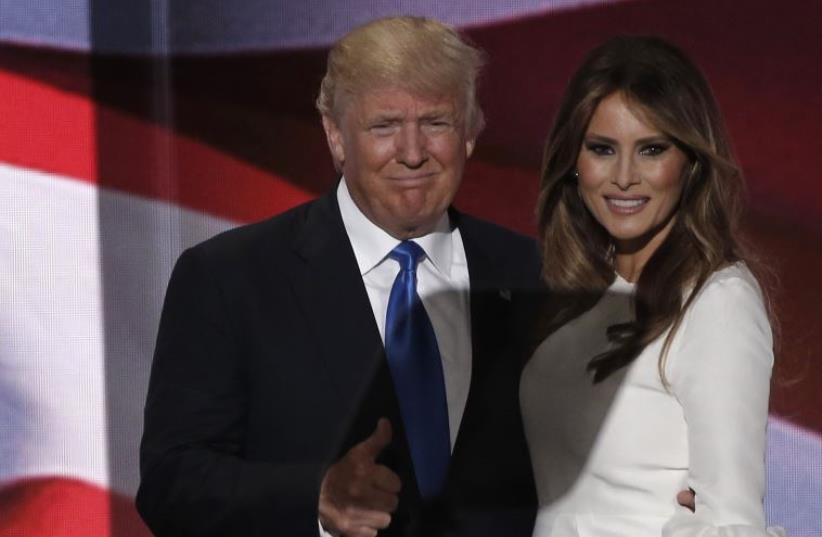 Republican US presidential candidate Donald Trump gives a thumbs up with his wife Melania.
(photo credit: MIKE SEGAR / REUTERS)
Advertisement
Republican presidential candidate Donald Trump on Thursday tried to quell the furor over his call for Russia to find Hillary Clinton's deleted emails, saying he was being sarcastic.In Moscow, meanwhile, a Kremlin spokesman pointedly told Washington to solve its own email problems.Trump on Wednesday invited Russia to dig up tens of thousands of "missing" emails from Clinton's time at the US State Department, prompting Democrats to accuse him of urging foreigners to spy on Americans.Later, he dismissed concerns raised by Clinton campaign manager Robby Mook that his comments raised national security concerns."You have to be kidding. His client, his person, deleted 33,000 e-mails illegally. You look at that. And when I'm being sarcastic with something ..." Trump said in a Fox News interview broadcast on Thursday.Asked if he was indeed being sarcastic, Trump snapped, "Of course I'm being sarcastic. They don't even know, frankly, if it's Russia. They have no idea if it's Russia, if it's China, if it's somebody else. Who knows who it is?"But you have 33,000 (Clinton) emails deleted, and the real problem is what was said on those emails from the Democratic National Committee," he said, referring to hacked emails released last weekend by WikiLeaks.The DNC emails showed party leaders favoring Clinton over her rival in the campaign for the nomination, US Senator Bernie Sanders of Vermont. The committee is supposed to be neutral.Trump's explanation echoed those of his campaign advisers and other supporters, who immediately tried to pass his comments off as tongue-in-cheek and not serious.But the exhortation for a US adversary to use cyber intrusions against an American political candidate drew criticism from intelligence experts and other public figures, including some Republicans.Trump made the remark at a news conference in Miami that allowed him to steal some of the limelight from the Democratic National Convention in Philadelphia, where Clinton on Thursday will accept her party's presidential nomination for the Nov. 8 election."Russia, if you're listening, I hope you're able to find the 30,000 emails that are missing," Trump, the Republican presidential nominee, told reporters.He later said on Twitter that if anyone had Clinton's emails, "perhaps they should share them with the FBI!"The Republican presidential nominee was referring to a private email system Clinton kept in her home in Chappaqua, New York, while secretary of state from 2009 to 2013. She handed over thousands of emails in 2015 to US officials probing that system, but did not release about 30,000 deleted emails she said were personal and not work-related.Cyber security experts and US officials have said there was evidence that Russia engineered the release of the sensitive Democratic Party emails to influence the election.But the Kremlin beat back those insinuations again on Thursday, saying they were driven by anti-Russian sentiment."It is so absurd it borders on total stupidity," said Kremlin spokesman Dmitry Peskov. "The Americans needs to get to the bottom of what these emails are themselves and find out what it's all about."Although some Democrats have wondered aloud whether Trump committed a crime in his remarks directed at Russia, the prospect of any prosecution is considered nil because of the strong guarantee of speech rights in the United States.Charging Trump for his comments about Russia would "turn campaign fluff into a crime" and would be laughable, said Daniel Richman, a Columbia University law professor and former US prosecutor.