Overall, 42 percent of Americans said they agreed with a Muslim ban while 50 percent said they disagreed. 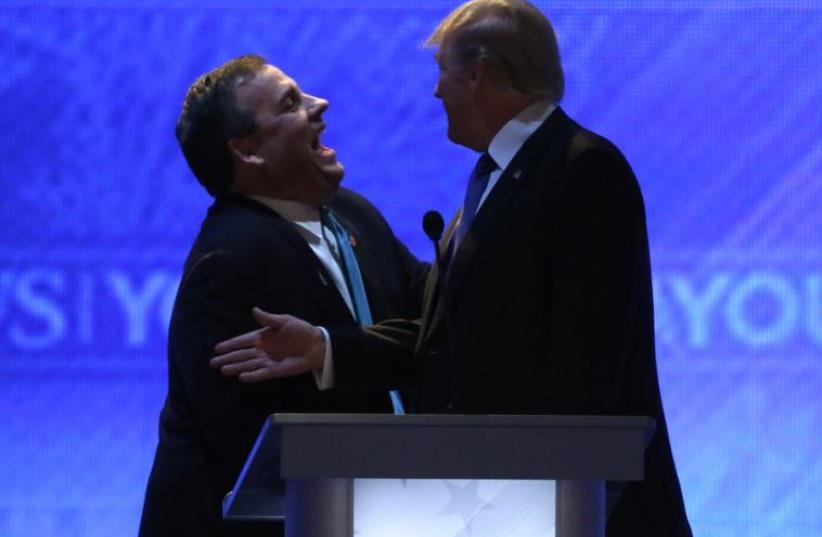 Chris Christie and Donald Trump laugh together during a commercial break in the midst of the February 6 Republican debate in New Hampshire
(photo credit: REUTERS)
Advertisement
The mass shooting in Orlando, Florida has allowed Donald Trump to seize upon a familiar issue he has used to great advantage -the threat of Islamist militants and his plan to limit Muslim immigration to the United States, offering him what could be a crucial moment to re-boot his sputtering presidential campaign.But while rank-and-file voters might respond positively to Trump's renewed call for a ban on some Muslims entering the country, his reaction to the massacre showed few initial signs of winning over Republican foreign-policy figures who have spurned the New York mogul."It's a missed opportunity to present a different image," said Peter Feaver, a top National Security Council aide in the George W. Bush White House. "He has doubled down on policies I oppose and that aren't going to solve the problem."Trump said in a speech Monday in New Hampshire he would suspend immigration from countries "where there is a proven history of terrorism" against the United States. He said radical Muslim immigrants were "trying to take over our children and convince them how wonderful ISIS (Islamic State) is."After the worst mass murder in modern U.S. history on Sunday left 50 dead, Trump's speech was hastily refashioned from a broad critique of Democratic rival Hillary Clinton to a dire warning of the threat from Islamist militants.Although Islamic State has claimed responsibility for the attack, US officials have maintained that Omar Mateen's motives were unclear and that he had no known direct links with the Syria-based group. Mateen, they said, was likely radicalized over the Internet.A week ago, the presumptive Republican presidential nominee's bid was taking on water. He was being battered by fellow Republicans for his comments about the Hispanic heritage of a federal judge, and Clinton was pulling away in the polls.A renewed focus on national security could provide Trump with the chance to expand his appeal both to undecided voters and to the Republican foreign-policy establishment.While Trump at times seems to relish being at odds with the establishment, the unhappiness among the party's hawks isn't just a matter of hand-wringing. It means if Trump does reach the White House, he could have a difficult time recruiting talented, experienced advisers.ALARMING THE MAINSTREAMMax Boot, an influential conservative at the Council on Foreign Relations, said the Orlando tragedy "could have provided an opening for Trump to rally Republicans against terrorism." But instead, Boot said, Trump has been "partisan and petty."Boot criticized Trump for suggesting on Monday that President Barack Obama may sympathize with radicalized Muslims and for reviving the proposed Muslim ban. "His performance has been in character," Boot said, "which is to say appalling."Trump has alarmed some mainstream Republicans with vows to shred international trade deals, his demands that Mexico pay for a border wall and his questioning of US foreign policy pillars such as its security commitments to NATO and Asian allies.Clinton struck a very different tone in a speech on Monday, urging "statesmanship, not partisanship" and "clear, rational discussion" on how to protect the United States from terrorist threats.Eliot Cohen, a top-ranking State Department official during the Bush administration, called Trump's reaction to the shootings "opportunistic and shallow" and "not what Americans expect from a president."Lanhee Chen, a top aide to Mitt Romney during his 2012 presidential campaign, suggested Trump will not be able to refine his image. "While it would be true in most cases a big speech like this could reset the decks, I think the challenge with Donald Trump is always who he is at his core," Chen said.But voters are another matter. Trump's swift rise within the Republican Party was at least partly due to the strident tone he has taken toward immigrants and refugees.When Trump responded to last year's terror attacks in Paris and California with a call for banning Muslims from entering the country, he surged in the Reuters/Ipsos poll in the weeks that followed, opening up a 30-point lead over his Republican primary rivals.Republicans continue to be strongly supportive of Trump's approach to handling terrorism. This month, two-thirds of Republicans said they agreed with Trump's proposal to temporarily ban Muslims from entering the country.Overall, 42 percent of Americans said they agreed with a Muslim ban while 50 percent said they disagreed, with another 8 percent not sure, according to another Reuters/Ipsos poll from May 17 to June 6. The poll of more than 6,000 people has a credibility interval, a measure of accuracy, of about 1.5 percentage points.Combating Islamist extremism was on the mind of Texas billionaire Doug Deason, a major Republican donor who told Reuters he will meet with Trump later in the week to discuss his support.Nothing Trump has said since the Orlando shooting has caused him to re-think backing him, Deason said.Peter King, a US congressman from New York, said his party's foreign-policy establishment will eventually have to get on board with Trump."As one of the two major candidates for president, he will have to get advice or consultation with top national-security people," King said.