Was Trump's 'Star of David' a 'Sheriff's star'?

In a tweet on Monday, Trump said he had not meant the six-pointed star to refer to the Star of David, which is a symbol of Judaism. Rather, he said, the star could have referred to a sheriff's badge. 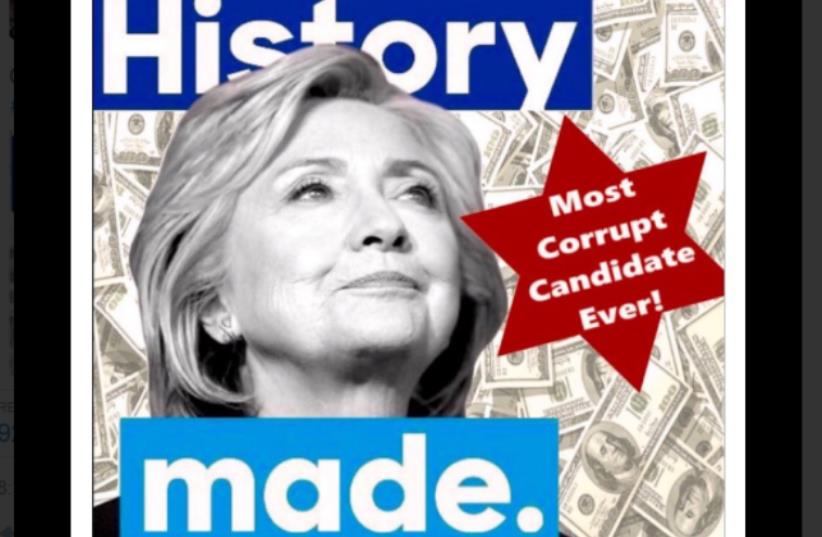 Did Trump use anti-Semitic imagery against Clinton
(photo credit: TWITTER)
Advertisement
NEW YORK - Presumptive Republican presidential nominee Donald Trump on Monday defended a post he made two days earlier to social media that included an image depicting rival Hillary Clinton against a backdrop of cash and a Star of David, while Clinton called the image anti-Semitic.In a tweet on Monday, Trump said he had not meant the six-pointed star to refer to the Star of David, which is a symbol of Judaism. Rather, he said, the star could have referred to a sheriff's badge, which is shaped similarly except for small circles at the ends of each of its six points, or a "plain star."His tweet came after Mic News reported on Sunday that the image attacking Clinton - which included the words: "History made" and, inside the star, "most corrupt candidate ever!" - had been shared on a neo-Nazi web forum called /pol/. Reuters confirmed the image was posted there on June 22 by viewing a link to an archived version of a /pol/ page, though the page has since been updated and the image removed."Donald Trump's use of a blatantly anti-Semitic image from racist websites to promote his campaign would be disturbing enough, but the fact that it's a part of a pattern should give voters major cause for concern," Clinton, the presumptive Democratic nominee, said in a statement emailed to reporters on Monday.Trump posted and deleted the tweet on Saturday, then tweeted a similar image in which the star was replaced by a circle. On Monday he lashed out at journalists for continuing to report on the original tweet."Dishonest media is trying their absolute best to depict a star in a tweet as the Star of David rather than a Sheriff's Star, or plain star!" Trump wrote on Twitter on Monday.

Dishonest media is trying their absolute best to depict a star in a tweet as the Star of David rather than a Sheriff's Star, or plain star!
— Donald J. Trump (@realDonaldTrump) July 4, 2016

The Nazis forced Jews to wear a Star of David on their clothing to identify themselves during the Holocaust.Saturday's incident was the latest departure by Trump from a recent effort to appease Republicans worried about his brash public persona by trying to appear more restrained. The Republican convention, where Trump is expected to be named the party's official nominee for the November presidential election, is two weeks away.In June, Trump fired his campaign manager Corey Lewandowski and began using a teleprompter to make speeches, hoping to show that his campaign could be more inclusive after earlier mishaps, including his statement that Mexicans crossing the U.S. border illegally were "rapists" and his mocking of a disabled reporter, which Clinton has begun using in attack ads against him.Ed Brookover, a senior adviser to the Trump campaign, said in an interview on CNN on Monday the campaign felt it had "corrected" the issue about the star by deleting Trump's original tweet.Brookover said the image's earlier appearance on the neo-Nazi forum was irrelevant."These images get posted and reposted and reposted on social media on many forums," he said. "There was never any intention of anti-Semitism."