By REUTERS
Occupy Wall Street protesters clash with NY police 311 (R)
(photo credit: REUTERS/Lucas Jackson)
Advertisement
NEW YORK - Police wearing helmets and carrying shields evicted protesters with the Occupy Wall Street movement early on Tuesday from the park in New York City's financial district where they have camped since September.Police spokesman Paul Browne said that about 70 protesters were arrested in Zuccotti Park during the nighttime operation for defying orders to leave and several more were arrested nearby, although most left voluntarily.RELATED:Occupy Wall Street joins rally against hate crime Egyptian activists reach out to global Occupy movement Authorities declared that the continued occupation of Zuccotti Park -- which had become a sea of tents, tarps and protest signs with hundreds of demonstrators sleeping there -- posed a health and safety threat.About a dozen protesters had chained themselves together and another two had chained themselves to trees before being cut loose and removed, Browne added. 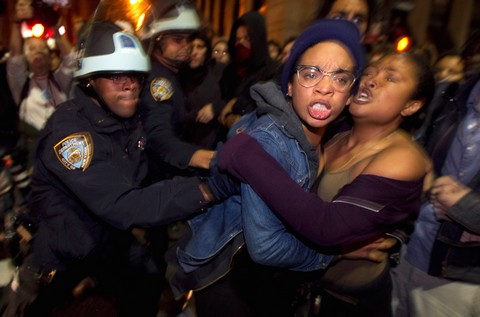 The office of New York City Mayor Michael Bloomberg said the protesters were ordered to "temporarily leave" the park and remove their tents and tarps. Police said protesters would be allowed to return once the park was cleaned, but would have to abide by rules banning items like tents, tarps and the storage of belongings.The protesters had set up camp in Zuccotti Park on Sept. 17 to protest a financial system they say mostly benefits corporations and the wealthy. Their movement has inspired similar protests against economic inequality in other cities, and in some cases have led to violent clashes with police.Police barricaded streets around the park, which had been lit up with spotlights, and were keeping people about a block away. The operation began at around 1 a.m. (0600 GMT) and the last protesters had been evicted by about 4:15 a.m. (0915 GMT). Authorities continued to sweep up and remove mounds of debris.Police used a loudspeaker to tell protesters they would be arrested if they did not leave. "They gave us about 20 minutes to get our things together," protester Sam Wood said as the eviction was taking place. "It's a painful process to watch, they are sweeping through the park."Browne said the city and the owners of the park, commercial real estate corporation Brookfield Office Properties, issued fliers to the protesters saying the park would be cleared for cleaning shortly after 1 a.m. (0600 GMT).'Occupation is posing a health risk'"The sanitation department is removing all their stuff," Browne said, adding that protesters could collect belongings later in the day at another location in the city. He said police would remain at the park to ensure protesters did not return with their belongings.The flier said the city and Brookfield had decided "that the continued occupation of Zuccotti Park posed an increasing health and safety hazard to those camped in the park, the city's first responders and the surrounding community."The protesters had set up a kitchen in the middle of the park and they also had a medical tent, a social media headquarters and a library. Protesters have said several hundred people had been regularly sleeping in the park.More people arrived at the scene to support the Occupy Wall Street demonstrators after the protesters sent out a mass text message alerting followers to the raid.Wood, an unemployed 21-year-old from Farmingdale, New York, said he had been living at the park since the protests started on Sept. 17. "They weren't disassembling anything nicely. ... They trashed our library," Wood said.Samantha Tuttlebee, 35, from the Brooklyn section of the city, said she was volunteering at the protesters' medical tent when the raid happened. She said she had not been living at the park."I'm shocked. They put my arms behind my back. They are really violent," Tuttlebee said. "We were trying to leave and they threw us out."The protesters issued a statement by e-mail that said, "You can't evict an idea whose time has come.""Some politicians may physically remove us from public spaces -- our spaces -- and, physically, they may succeed. But we are engaged in a battle over ideas. Our idea is that our political structures should serve us, the people -- all of us, not just those who have amassed great wealth and power," the Occupy Wall Street statement added.Police on Monday moved into an encampment by anti-Wall Street protesters in Oakland, California, clearing out occupants and taking down tents, while in Portland, Oregon, police confronted an estimated 1,000 protesters on Sunday.The protesters in Wall Street had said they hoped on Thursday to shut down Wall Street -- home to the New York Stock Exchange -- by holding a street carnival to mark the two-month anniversary of their movement.