By REUTERS
Floods in the Philippines 311
(photo credit: REUTERS)
Advertisement
ILIGAN, PHILIPPINES - Philippine President Benigno Aquino declared on Tuesday a state of national calamity after flash floods and land slides caused by a typhoon swept through a southern region late last week, killing about 1,000 people and leaving tens of thousands homeless.The national disaster agency said 957 were killed and 49 were missing, with most of the casualties in the cities of Cagayan de Oro and Iligan in the Mindanao region.RELATED:Philippines searches for hundreds after typhoon kills 650Aquino held meetings with officials in the two cities, worst-hit by water, mud and logs that swept down mountains as residents in riverside and coastal villages slept in the early hours of Saturday."First priority is to relocate to areas that no longer pose a danger to them," Aquino said at a meeting with officials in Cagayan de Oro, as he vowed action to prevent another tragedy of the same magnitude.The disaster agency said more than 338,000 people in 13 provinces were affected by the disaster, with nearly 43,000 still in evacuation centers. 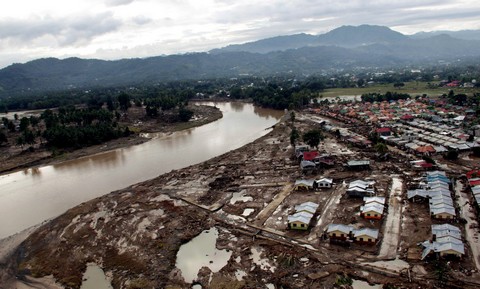 More than 10,000 houses were damaged by Typhoon Washi and the flash floods, of which nearly a third were totally ruined. Many schools, roads and bridges were also badly damaged.Aquino's spokesman, Ricky Carandang, said the declaration of a national calamity would allow the government to access a bigger pool of funds for relief and rehabilitation.Cagayan de Oro and Iligan are struggling to prevent disease from spreading in crowded evacuation centers and have started digging graves to bury decomposing bodies.An official of the British-based Christian relief and development organization World Vision said people were fighting for space at evacuation centers.The state-run Mines and Geosciences Bureau (MGB) said it had warned authorities in the area last year about the need to relocate families living along riverbanks that swelled after one month's worth of rainfall fell over the weekend."This tragedy that happened in Cagayan de Oro ... will be repeated in the future. And therefore, there needs to be appropriate preparation to prevent fatalities," Leo Jasareno, acting director of the MGB said in a television interview.
Advertisement
Subscribe for our daily newsletter