Some 45 rockets and mortars were fired toward Israeli communities between Tuesday night and Wednesday morning. A mortar shell landed in the yard of a kindergarten in the Eshkol Regional Council.

By ANNA AHRONHEIM, TAMARA ZIEVE
Israeli fighter jets strike targets in the Gaza Strip, June 20, 2018 (IDF Spokesperson)
Advertisement
IDF Chief of Staff Gadi Eisenkot vowed Wednesday afternoon to return security to the residents of southern Israel after some 45 mortars and rockets were fired from the Gaza Strip between Tuesday night and early Wednesday, some exploding in Israeli communities. 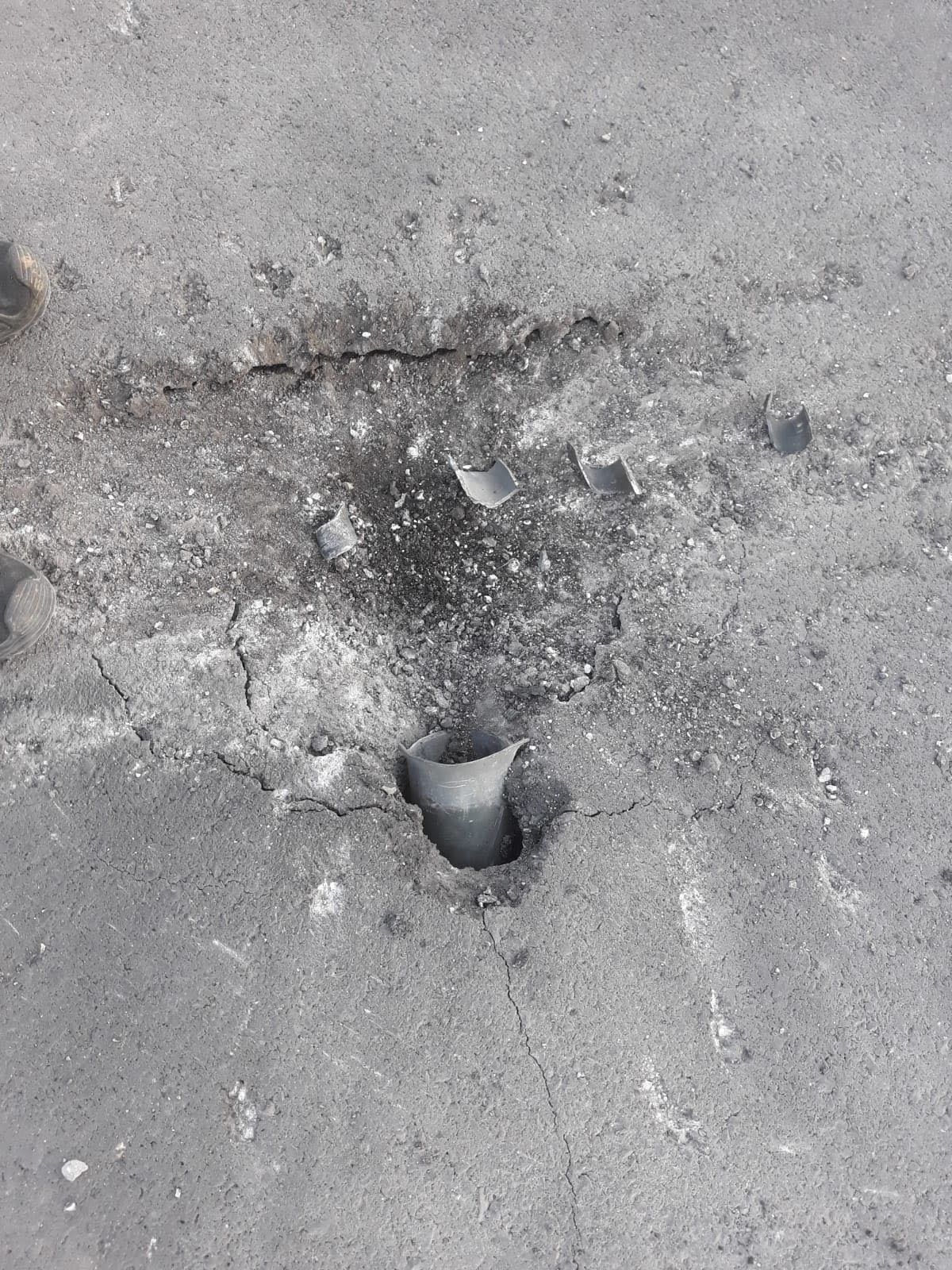 A shell of a rocket fired from Gaza scars the road in the Eshkol regional council (Courtesy)
"The IDF is working around the clock with the initiative and strength our enemies know well. We will continue targeting those who seek to harm us, and return the security to the residents of the south," Eisenkot said at an officers' course graduation ceremony."I'm convinced we will achieve this with wisdom, determination and soon," he added.Speaking at the ceremony Defense Minister Avigdor Lieberman warned Hamas, "for what happened yesterday, I have only (four) words for Hamas: It was a mistake.”Hamas spokesman Sami Abu Zuhri responded to Lieberman, taking to his Twitter account warning the defense minister "do not misunderstand our patience."The rocket fire, which began around 1.15 in the morning until around 6 am came shortly after IAF jets struck three targets in the Strip in response to incendiary kites and explosive balloons launched towards southern Israel.Seven of the projectiles were intercepted by the Iron Dome missile defense system and another three fell inside the Strip. Four were found inside communities in the Eshkol Regional Council, causing damage to nearby homes and cars.  One landed in the yard of an empty kindergarten.In response to the rocket and mortar fire, Israeli jets struck over 25 Hamas targets-including an underground training area- in four military compounds in three waves of retaliatory strikes wounding at least three Palestinians.“The Hamas terrorist organization led a severe rocket attack on Israel's home front and is leading the Gaza Strip and its residents to deterioration and escalation,” read a statement released by the IDF. Holding Hamas responsible for what happens in the Gaza Strip, the IDF said the terror group will “bear the consequences” for attacks against Israeli civilians.Despite the barrage, children went to schools as normal.

A policeman digs up fragments from a projectile fired from Gaza that landed next to a kindergarten, June 20th 2018 (Credit: Israel Police)
"After evaluating the situation, it was decided that studies would be held as usual but will be adapted to the night's events," said Gadi Yarkoni, head of the Eshkol Regional Council, noting that residents had been kept all night by the barrage of projectiles. "We try to maintain a proper routine within the situation, because that is the best way for us. We support the IDF in its response to kite terrorism, which harms our routine and we expect that the IDF will continue to act to restore quiet, to end the firing at our settlements and homes and fires in our fields,” he added.Members of the regional council's teams were present at the communities that had been hit by rockets, providing support to residents and officials. Former head of the Eshkol Regional Council, MK Haim Yeilin of the Yesh Atid party called on the government and IDF to do more to counter the threat posed by incendiary devices launched from the Gaza Strip which have ravaged the south of the country."Hamas is trying to change the equation so that a kite and a balloon can be seen as a children's game, and we are over 80 days in which the cabinet does not order the IDF to respond accordingly. We must not surrender to Hamas' new equation and its attempt to show that over 30,000 dunams of land that were burned are not acts of terror. Now that the cabinet understands, even Hamas must unequivocally understand: a kite is like a Qassam. "Hamas spokesman Fawzi Barhoum praised the “courageous resistance that responded to the occupation’s bombardment of its posts in Gaza. It’s its legitimate right.” “The message of the bombardment confirmed that the resistance is the one who determines the rules of engagement and its way and will not allow the occupation to isolate our people or impose any new equations. If he tries he will  bear the consequences,” he wrote on Twitter.