The outpost faces a looming evacuation. 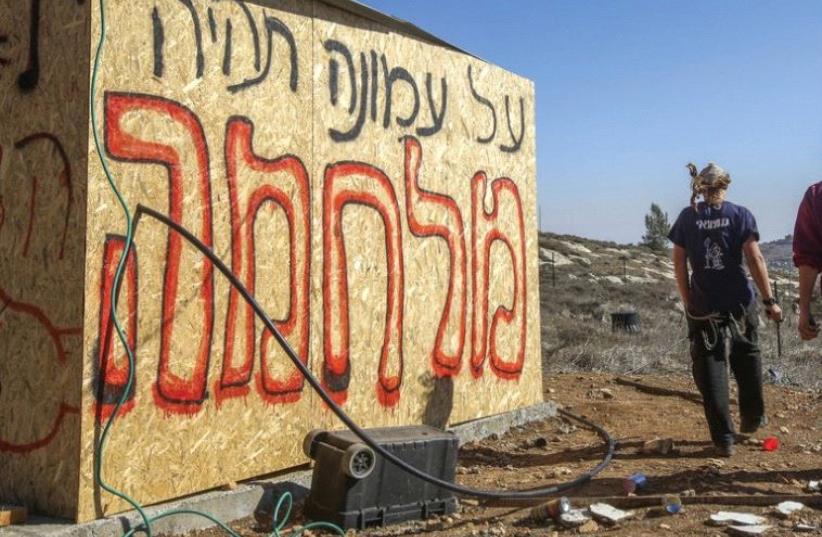 ‘THERE WILL be war over Amona,’ the graffiti reads at the outpost in the Binyamin region of Samaria in the West Bank
(photo credit: MARC ISRAEL SELLEM/THE JERUSALEM POST)
Advertisement
A number of Givati Brigade soldiers reportedly attempted to abandon their posts on Saturday evening in attempt to refuse taking part in evacuating the Amona outpost.According to the Jerusalem Post's sister paper Maariv on Saturday night, soldiers told their commanders that evacuations were not among their duties. However, they eventually agreed to return to their posts in order to assist indirectly in protecting roadways while the evacuation would take place.On a roadway near the Ofra settlement, dozens of protestors blocked roadways around 1:00 AM on Sunday. Israel Police and Border Police forces eventually dispersed them. One minor was arrested for attacking a Border Police officer.
Amona resident on importance of settlements "we"re not occupying"
Around a thousand people gathered over the weekend in Amona to show their support for residents there facing an impending eviction. Yet, the hundreds of mostly-teenaged supporters descended upon the hilltop outpost Saturday night did not appear worried. The outpost actually took on a party-like atmosphere, as teenagers danced in the mud to techno-rave melodies interlaced with religious proverbs.“Right now, I am just living my life as normal,” Amona resident Yehuda, 42, who declined to state his last name, told The Jerusalem Post, “I’m doing what I do every day, and tomorrow I’ll go to work.”The outpost, built in 1995 on private Palestinian land, faces a looming evacuation after the community voted 58 to 20 on Wednesday night against a proposal to peacefully resettle the families on a nearby plot of land. “There are so many politicians that are trying to sell the residents of Amona. It is forbidden to have a deal that goes against the wishes of God,” Itamar Ben Gvir, an attorney associated with the settler movement said. “I am against hurting police and soldiers and I hope that nobody will be injured from the residents here. Until today, we are still waiting on Bibi’s promises of building 300 homes in Beit El.”“It was a bad deal. It hurts our heart that the police would come to clear Jews from this place,” Michael, 21, from Jerusalem said while taking a break from dancing.The proposal pushed by Bayit Yehudi leader Naftali Bennett and Prime Minister Benjamin Netanyahu sought to move the outpost to an adjacent hilltop that is considered “absentee,” that is, the Palestinian owners are unknown. Amona residents said the proposal relocates only 12 of the approximately 40 families on the hill. The current outpost was built illegally in 1995 on the rocky hilltop overlooking the settlement of Ofra.Now hundreds of people have gathered in the cold on the hill to protest any evacuation effort.Amona leaders called for “passive resistance” and Prime Minister Benjamin Netanyahu told Amona activists on Friday to “not harm IDF soldiers and members of the security forces in any way.” Nevertheless, violent clashes occurred at the outpost in 2006 when security forces carried out a High Court of Justice ruling to demolish nine homes.In a dilapidated Amona trailer, a group of teenagers who came from Eilat, Tel Aviv and Ra’anana sat on broken couches amid cigarette butts and empty takeaway food trays. Speaking to the Post, the teenagers cursed the police and Army and said they “would not leave for the world.”When asked if they would resist violently, the group said jokingly, “no we’ll give them flowers.”