The incident marks the second attack on Border Police of the day. 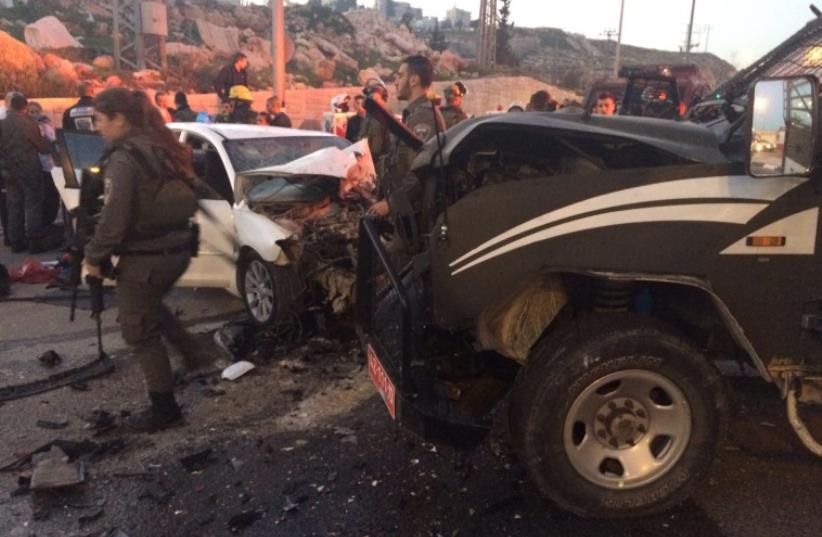 Scene of car-ramming attack near Ma'aleh Adumin, February 13, 2016.
(photo credit: ARIK ABULOF/JERUSALEM FIRE AND RESCUE)
Advertisement
Two Palestinians attempted a car-ramming attack against multiple Israelis near the West Bank Jewish settlement of Ma'aleh Adumim Saturday afternoon, according to MDA.The incident began when a police lookout position noticed two suspicious persons crossing the security fence and entering into a vehicle with Israeli license plates that was waiting for them on the Israeli side of the barrier. The vehicle, which was located near the a-Zaim checkpoint, began moving towards Jerusalem, and the lookout position reported the development to Border Police jeep units, which began a pursuit.Once the vehicle arrived at the Metzdat Adumim checkpoint, the vehicle became stuck in traffic, and at that point officers exited their vehicles and headed on foot towards the suspects' vehicle. Once the Palestinians spotted police approaching, the suspects put their car in reverse, struck a car behind them in their attempt to escape, and tried to run over the officers. Police officers "who were in immediate and tangible danger" opened fire at the car, which continued driving, police said. It drove over the traffic barrier and did a U-turn, driving towards a-Zaim. A second police unit blocked its path. The suspects struck the Border Police jeep full force, and came to a stop.Three Border Policemen, aged 21, 29, and 43, were injured in the attack and were taken to the Hadassah University Medical Center in Jerusalem in light condition.The same hospital also received the two wounded Palestinians, and said that the teenager had a gunshot wound to his knee and that the 40-year-old had an injury to the jaw.

The incident marks the second attack against Border Police Saturday.Earlier in the day, a 17-year-old Palestinian girl was shot and killed after attempting to stab an IDF soldier on guard duty in Hebron by the Cave of the Patriarchs, the IDF said in a statementIDF forces on site opened fire at the assailant once she drew a knife during a security check, subsequently succumbing  to her wounds.MDA paramedics on site attended to two victims who sustained upper body stabbing injuries. One was a Palestinian in his thirties who, according to MDA, attempted to stop the culprit. He was evacuated to Shaare Zedek Medical Center in Jerusalem for further treatment.The other was a border police-officer who was injured lightly and did not require further treatment.