According to Iranian ambassador to Beirut, every family of a martyr will receive $7,000, while a family whose home was demolished by the IDF will receive $30,000. 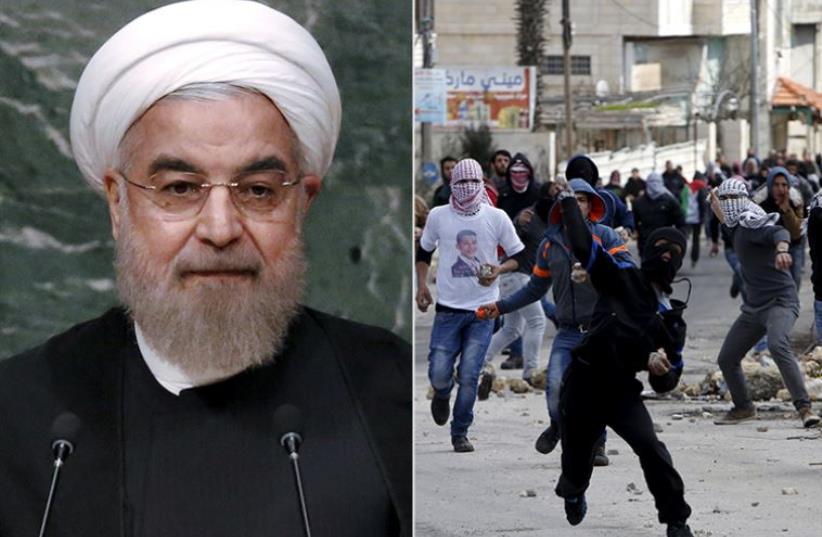 Iran's Rouhani
(photo credit: REUTERS,JPOST STAFF)
Advertisement
The Islamic Republic of Iran announced on Wednesday its support for the "Jerusalem intifada" that Israel has been witnessing for the past five months, declaring that it would give financial rewards to families of Palestinian terrorists. Speaking at a press conference in Beirut on Wednesday, with the participation of several leaders of Palestinian factions, Iranian ambassador to Lebanon, Mohammad Fathali, said: "Continuing Iran's support for the oppressed Palestinian people, Iran announces the provision of financial aid to families of Palestinian martyrs who were killed in the "Jerusalem intifada."According to the ambassador, every family of a martyr will receive $7,000, while a family whose home was demolished by the IDF will receive $30,000. The aid will be conveyed through the Palestinian branch of the Shahid Institution, which was established in Iran in 1992.Fathali called on the Arab Muslim nation to unite around the central Palestinian issue and said that "the martyrs' blood will release the entire Palestine, from the river to the sea."Hamas' foreign relations chief, Osama Hamdan, who participated in the press conference, said that Hamas appreciates the Iranian initiative to support the Palestinian intifada, adding that this is not the first gesture Iran has made to Palestine and that the former treats the Palestinian issue as "its own issue." Ofir Gendelman, a spokesman for Prime Minister Benjamin Netanyahu, said Israel condemned the Iranian ambassador's declaration. "This demonstrates again Iran's role in encouraging terror," Gendelman tweeted. On Wednesday afternoon, Capt. (Res.) Eliav Galman, 30, was killed by friendly fire in the midst of a stabbing attack at the Gush Etzion junction in the West Bank.   A soldier stationed at the junction fired at the assailant, striking both him and Galman, an IDF spokeswoman said. She added that this assessment was based on an initial investigation of the incident.