The drop in electricity is part of the PA’s push to pressure Hamas to rescind its control of Gaza. 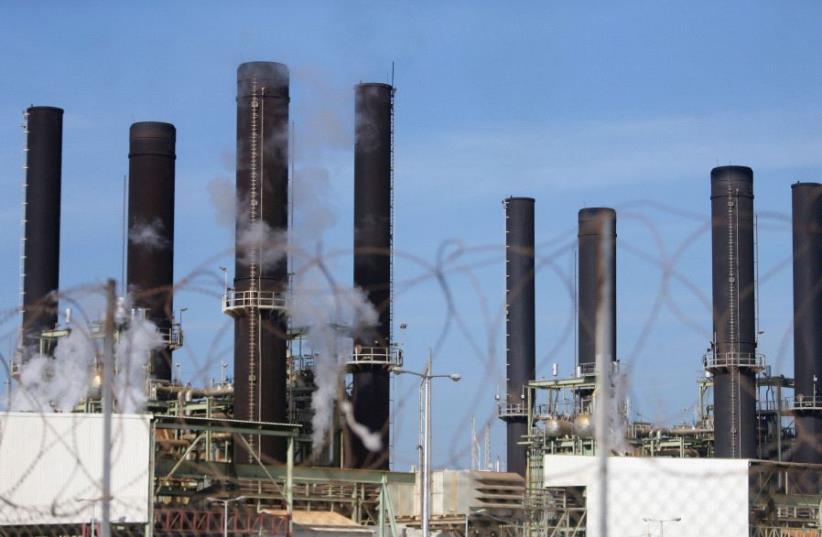 A view shows Gaza's power plant through a barbed fence in the central Gaza Strip January 16, 2017
(photo credit: REUTERS)
Advertisement
Israel’s security cabinet agreed late Sunday night to cut the electricity it sends to Gaza by 40 percent, now that the Palestinian Authority has said it intends to only pay 60% of it’s monthly bill, Army Radio reported.The 2 million people in the Hamas controlled Strip will now have only two to three hours of power a day, down from four hours of electricity they have lived on since April.The drop in electricity is part of the PA’s push to pressure Hamas to rescind its control of Gaza. Hamas has ruled Gaza since it ousted Fatah in a bloody coup in 2007.The Gaza residents in April were already living on 12 hours of power a day, half of the necessary 450 to 500 MGW, when the PA imposed an onerous tax on the diesel fuel needed to run the Gaza power plant.The plant, which had provided between 90 to 120 MGW, shut down because it could not afford the tax, which doubled the price of operating the plant.This left Israel, which provides Gaza with 125 MGW of power as Israel’s sole provider of electricity.Egypt also provides 27 MGW of power, but its three electricity lines are rarely operational.
Qatar donated $12 million of fuel to offset Gaza power shortage (credit: REUTERS)
The UN and Left-wing NGOs have warned of a humanitarian crisis if the electricity shortage is prolonged or reduced. The absence of electricity, means that water can not be purified for drinking, untreated sewage spills into the sea and life saving health services are not available.On Sunday, the NGO Gisha — Legal Center for Freedom of Movement, wrote a letter to Defense Minister Avigdor Liberman urging him not to further reduce power.“The diminished supply of electricity has serious and far-reaching implications: one hundred million liters of untreated sewage are pumped into the Mediterranean Sea daily,” Gisha said.“Water desalination stations cannot operate; sewage cannot be pumped away from residential areas; generators are over-extended; entire hospital wings are shut down during blackouts, and people who rely on life-saving equipment are at risk,” Gisha explained.The UN has made similar comments but has not offered an alternative.Liberman, at a meeting of Lobby for Diplomatic Vision for Gaza at the Knesset on Monday addressed this issue saying, "Hamas cannot take taxes from people of Gaza," and "For the first time, Gaza residents realize the current crisis has no connection to Israel."The Defense Minister added, "We have no intention to take a military step or to restrain ourselves when there are provocations. We will respond with full force. The ball is in the field of Hamas. Sinwar must decide whether his children will be shahidim hiding in tunnels or travel around the world with no fear."Gil Hoffman contributed to this report.