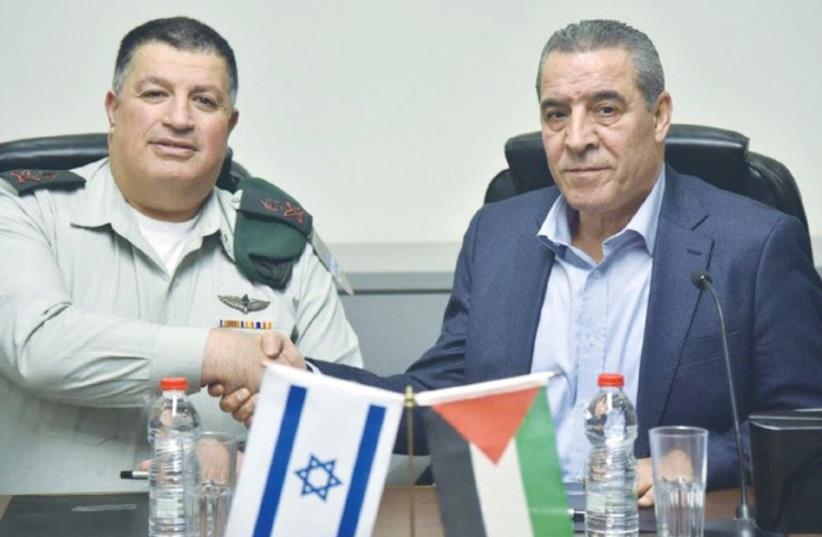 MAJ.-GEN. YOAV (POLY) MORDECHAI (left) shakes hands with Palestinian Authority Civil Affairs Minister Hussein al-Sheikh after agreeing to renew activities of the Joint Water Committee.
(photo credit: COGAT)
The Palestinian Authority now has autonomy over water projects in Palestinian towns and villages in the West Bank, a Palestinian official told The Jerusalem Post.Dib Abdel Ghafour, a top official at the PA Water Authority, announced the change Monday, just one day after Israelis and Palestinian signed an agreement to reconvene the Joint Water Committee for the West Bank, which last met in 2010.The document was signed by the Coordinator for Government Affairs in the Territories Maj.-Gen. Yoav Mordechai and Palestinian Authority Civil Affairs Minister Hussein al-Sheikh.“I believe this is a step in the direction of comprehensive peace agreement with the Israeli government and a real and serious peace that gives Palestinians and Israelis a real chance...I know there is a huge crisis of trust between the two sides, but what strengthens trust [between us] is what it is agreed upon between us,” Sheikh said after signing the agreement.The reestablishment of the committee will allow for the advancement of 97 Palestinian water and sewerage projects that have been suspended for more than six years.The newly signed agreement is also the latest in a series of steps the IDF has taken to give the Palestinians increased autonomy over their own affairs, particularly in the areas of electricity, telecommunications and postal services.The PA Water Authority, which operates mostly in Areas A and B of the West Bank, said that, as part of the new agreement, a mechanism had been formed that allowed it to implement infrastructure and sewerage projects without receiving the approval of the Joint Water Committee.“The agreement pertains to an amendment to the working mechanism of the Joint Water Committee. There were many problems previously and 97 projects have been suspended since 2010,” Ghafour told the Post.“Most of the 97 projects have funding. We now need to speak with the donors before we start work on the projects,” he said. “After the signing of this agreement, we can now work on these projects easily, which are infrastructure projects. The different projects include water network, sewerage, and storage projects,” he added.The amendment, he explained, would also give the PA the ability to operate in Palestinian sections of Area C, which is under Israeli military and civilian control.“Projects in encampments and villages in Area C do not need approval. We only need to inform the JWC. However, projects that cross through parts of Area C outside the encampments and villages need approval from the committee,” Ghafour said.“All matters pertaining to wells and underground water will need to be discussed and approved through the JWC as was done previously,” he explained. “We are to some extent optimistic. We resolved part of the problem. We are now optimistic that the situation can be better than in the past.”Ghafour added that a schedule for JWC meetings has yet to be created. Israel had blamed the absence of JWC meetings on the Palestinians, explaining that they had boycotted the meetings.The Palestinians in turn had said that they did not want to sit on a committee that dealt with water for the settlements.“The issue of the settlements is over. There will be no discussion of issues related to the settlements anymore. We will be discussing Palestinian projects on the JWC.”The UN on Monday lauded the reestablishment of the JWC.“I welcome the signature of an agreement to renew the activity of the Israeli – Palestinian Joint Water Committee to improve the water infrastructure and supply in the occupied West Bank and Gaza,” UN Special Coordinator for the Middle East Peace Process Nikolay Mladenov said.“This, along with previous joint agreements on electricity, water, mail and 3G cellular coverage, is in line with the Middle East Quartet’s recommendations,” Mladenov said.“If fully implemented, this agreement would be an important step toward preserving the two-state solution. I encourage further cooperation between the two sides which is critical to the viability of a future Palestinian state,” Mladenov said.Gidon Bromberg, Israeli co-director of EcoPeace Middle East, praised the decision to revive the JWC, stressing the importance of reaching a fair agreement as the parties pursue new water projects.“Though all details have yet to be made public, EcoPeace Middle East welcomes in principle the news that the Israeli Palestinian Joint Water Committee will be reinitiated under new terms that will advance on the ground water supply and sanitation solutions, improving the livelihoods and the environment for Palestinians and Israelis alike,” Bromberg told the Post on Monday.Over the past several years, EcoPeace Middle East – which has offices in Israel, the Palestinian Authority and Jordan – has been promoting a campaign called “Water Issues Cannot Wait.” The campaign has focused on “the lose-lose for both peoples of the status quo arrangements,” Bromberg said.“Advancing water projects and reaching an equitable agreement as to the fair share and sustainable management of our shared water and environmental resources will have a transformative impact, building trust and confidence that positive change can take place on an issue vital to life,” he said.