Funeral to be held in Jerusalem after service in Otniel began this morning at 11 o'clock; "He was not just our father, he was the father to so many." 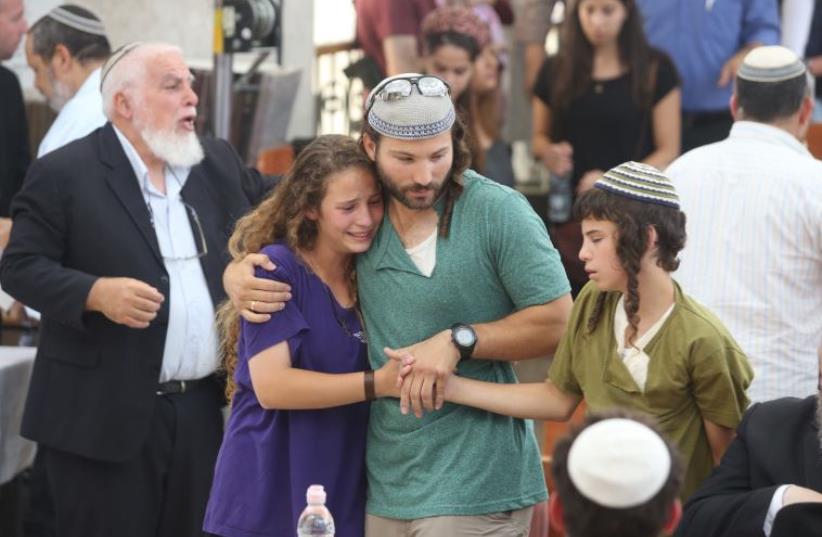 Family of Rabbi Michael Mark at his funeral in Jerusalem
(photo credit: MARC ISRAEL SELLEM/THE JERUSALEM POST)
In an emotional video released Sunday morning, the children of Rabbi Michael "Miki" Mark, who was murdered by Palestinian gunmen on Friday,  pleaded with the public to attend their father's funeral, which will take place in Jerusalem's Har Hamenuhot cemetery later on Sunday after a ceremony in Otniel.
President Reuven Rivlin and Justice Minister Ayelet Shaked were among hundreds of mourners who answered the call and joined Mark's family in the Otniel yeshiva, before the procession was set to travel to Jerusalem.
Prayer service at funeral for Michael Mark (Credit: Jack Brook)
Rivlin promised that Israel will fight against such terror attacks, but said "nothing can sooth the pain" of a tragedy such as this.


In their appeal for people to attend the funeral, Mark's children paid an emotional tribute to their father, saying: "He was not just our father, our father was the father of so many people," one of his daughters said in the video. "It is so important to us that people come because he was genuinely for everyone.""Everyone will hear just how good our father was, and take that good and be better people, more loving."Rabbi Mark served as the director of the yeshiva in the settlement. He was driving near Hebron with his wife and two of his ten children when he was killed.In Friday’s incident, the rain of bullets against the vehicle caused it to overturn. Paramedics who arrived at the scene found Mark in the upside down vehicle, while the other passengers had been managed to exit the car. Magen David Adom paramedic Zaki Yahav said that it was a “very difficult” scene. Mark “was trapped inside” with gunshot wounds and other injuries form the accident. He didn’t have a pulse and he wasn’t breathing. “We tried to resuscitate him,” said Zahav, but it was not possible they declared him dead at the scene.Magen David Adom reported that Mark’s wife, in her 40s, has been sedated and intubated before being rushed to the Hadassah Medical Center in Ein Karem in a serious condition. His daughter, 14, sustained a gun shot wound to her stomach, while and his son, 15, was lightly wounded in the attack.Rabbi Mark's wife Hava is reportedly still in a serious condition.
Subscribe for our daily newsletter