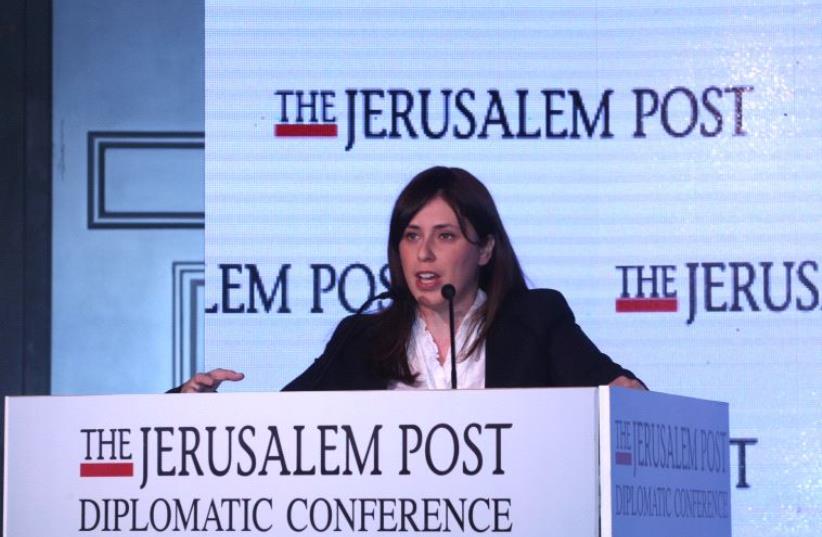 Tzipi Hotovely
(photo credit: MARC ISRAEL SELLEM)
Advertisement
Prime Minister Netanyahu was correct when he said that evacuating Jews from Judea and Samaria, West Bank settlements, is ethnic cleaning, Deputy Foreign Minister Tzipi Hotovely said on Wednesday morning as she opened the annual Jerusalem Post Diplomatic Conference.During her short speech she called on Israel to annex Area C of the West BankHotovely recalled how Netanyahu had made headlines when he said, “transferring Jews is an ethnic cleaning. It was very difficult for some people to hear that, but it’s the truth.”“You can’t transfer people, it’s an abolishment of human rights, but [somehow] it’s OK when it come to Jews,” Hotovely said. “Every future solution [to resolve the Israeli-Palestinian conflict] should include Judea and Samaria under Israel’s sovereignty, because this is the Jewish homeland,” Hotovely said. She said that she had watched diplomats unsuccessfully try to resolve the Israeli-Palestinian conflict throughout her whole adult life.“Three American presidents, six secretaries of state made dramatic efforts to find a solution,” but they “all came back with empty hands,” she added.She recalled how one diplomat had said that they would succeed because they would work harder.“Much as I believe in hard work, sometimes work is not enough,” she said.What is more important is eliminating the “myth of occupation" and re-educating Palestinians for peace. “The term 'occupation' is legally wrong and historically wrong,” she said.Jews have lived in the land of Israel for thousands of years going back to the Bible, she said, but when Palestinian leaders speak of Israeli "occupation" they mean the one that dates back to 1948, when the state of Israel was founded, she said.In short, she said, they do not believe that Israel should exist.“We need a way to start speaking of a new way of thinking of the fact that Jews should live in their homeland," she said.“No Jew can live in Tel Aviv if he doesn’t have a connection to Judea and Samaria,” she said.