Palestinian shot dead after attempting to run down police in Shuafat 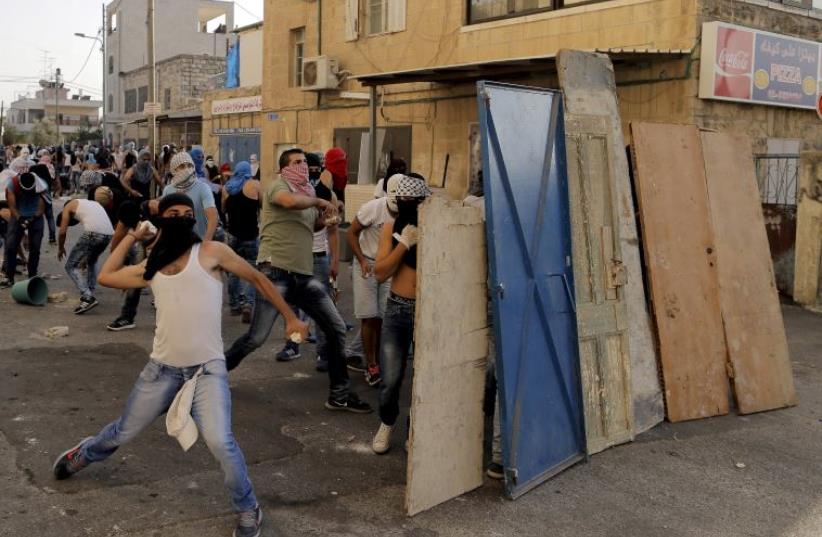 Palestinians throw stones towards Israeli police (not seen) during clashes in Shuafat, an Arab suburb of Jerusalem
(photo credit: REUTERS)
Police shot and killed a Palestinian terrorist near Jerusalem’s Shuafat refugee camp early Monday morning after the suspect attempted to ram his car into a group of officers stationed in the volatile area.Shortly after midnight, after units carried out patrols and prepared to leave the area, Police spokesman Micky Rosenfeld said officers walking toward their vehicle were targeted by the assailants.“Police operations were taking place, and when units stationed there were leaving the area there was a vehicle that attempted to ram into officers who were walking in the street,” he said.“Based on the danger and life-threatening situation they were in, Border Police responded by opening fire on the vehicle, which didn’t stop. Both of the passengers were shot in order to stop the vehicle.”According to Rosenfeld, one suspect was taken to an area hospital, where he later died from his wounds; the second suspect remains in moderate condition.Rosenfeld said none of the officers were wounded during the attempted attack.“We have confirmed that it was a terrorist attack,” he added. “Police operations will continue throughout the capital to prevent further attacks.”