Poll: Most Palestinians support return to an armed intifada

The poll’s findings indicate significant changes in attitudes since the second half of 2015. A majority of respondents now back a two-state solution, and support for stabbing attacks has dropped. 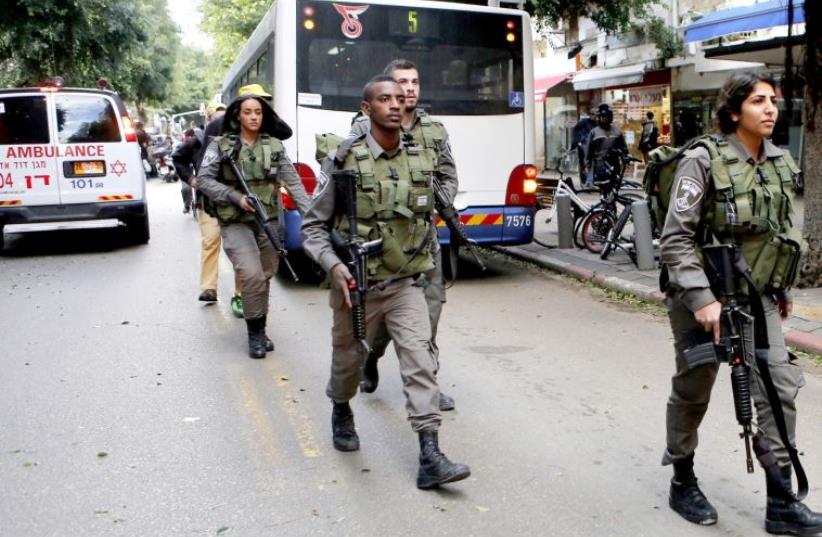 Border Police officers secure the scene of the terror attack on Dizengoff Street, Tel Aviv, by Nashat Milhem, in which two people were killed, January 1
(photo credit: REUTERS)
Advertisement
Palestinian support for knifing attacks against Israelis has dropped, but a majority of Palestinians in the West Bank and Gaza Strip continues to support a return to an armed intifada, according to a public opinion poll published on Tuesday.The poll, conducted by the Palestinian Center for Policy and Survey Research last week, interviewed 1,270 adults. It has a margin of error of three percent.The poll’s findings indicate significant changes in attitudes since the second half of 2015. A majority of respondents now back a two-state solution, and support for stabbing attacks has dropped, particularly among West Bank Palestinians.However, the poll found that a majority of respondents in both the West Bank and Gaza Strip continue to support an armed intifada, believing it would help Palestinians achieve their rights in ways that negotiations could not.Support for use of knives had dropped from 67 percent three months ago to 58% in this poll. Support for such attacks in the Gaza Strip stands at 82%, and in the West Bank at 44%. Three months ago, support among Palestinians in the West Bank for the knifing attacks stood at 57% and among Gazans at 85%.In the absence of peace negotiations, 56% support a return to an armed intifada. Three months ago, 60% supported a return to an armed intifada.With regards to Palestinian elections, the survey found that 64% of the public want Mahmoud Abbas to resign, while 31% want him to remain in power. These results are almost identical to those obtained in the previous poll three months ago.If Abbas were not to run in a future election, 33% prefer to see jailed Fatah leader Marwan Barghouti replace him, while 24% favor Hamas leader Ismail Haniyeh. Prime Minister Rami Hamdallah and Hamas leader Khaled Mashaal received five percent, while ousted Fatah leader Mohamed Dahlia and former Prime Minister Salam Fayyad each get three percent.The poll found that 51% of respondents support the two-state solution, while 48% oppose it. In the previous poll, 45% voiced support for the two-state solution, and 54% opposed it. In addition, the poll showed that 60% of respondents are opposed to recognition of Israel as the state of the Jewish people.A majority of 61% believes that the two-state solution is no longer practical due to settlement expansion, while 37% believe it is still practical.Seventy-four percent believe that the chance of establishing a Palestinian state in the next five years are slim to non-existent.When asked about the long term aspiration of the Palestinian Authority and PLO, 61% said that it is to “recover all or parts of the land occupied by Israel in 1967.” Twenty- five percent said it is to conquer the State of Israel and kill most of the Jews, according to the results.