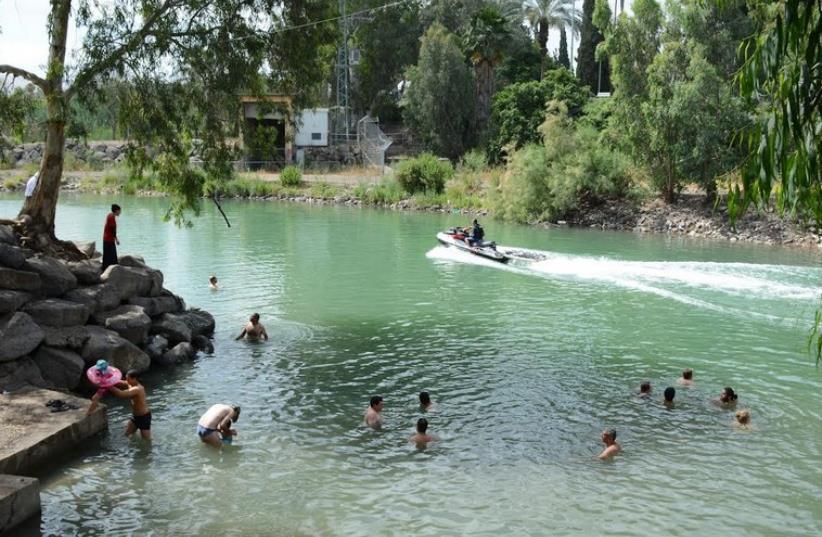 Swimming at the mouth of the Jordon River last week
(photo credit: SARAH LEVIN)
Advertisement
The polluted and trickling Jordan River might once again be “deep and wide” as well as clean by 2025, if the joint efforts of Israelis, Palestinians, and Jordanians bear fruit.On the diplomatic stage, Palestinians and Israelis have not held direct peace talks since April 2014. But on Tuesday and Wednesday, activists and officials from both governments as well as from Jordan met at the Crowne Plaza Hotel on the Jordanian side of the Dead Sea for the second time this year about water.They unveiled the first, 35-year Regional NGO Master Plan for Sustainable Development in the Jordan Valley.If it is implemented, pollution would stop flowing into the Jordan River within a decade, according to the plan’s author, EcoPeace Middle East, which organized the two-day conference.“Adopting these measures will help build confidence between the parties and improve the daily lives of Palestinians, Israelis, and Jordanians,” Palestinian Authority Deputy Agriculture Minister Abdullah Lahlouh said at the event.His sentiment was echoed by Israel’s Deputy Regional Cooperation Minister Ayoub Kara (Likud).“There is fertile ground here for cooperation,” said Kara, adding that the program could build “bridges of peace.” “This is one of the most important rivers for believers from all over the world,” Kara said.In biblical times the Jewish people ended its 40-year sojourn in the desert and entered the Promised Land by crossing the Jordan River. Centuries later Jesus was baptized in its flowing waters.In the modern era, pollution and mismanagement have so damaged the river that some places are almost narrow enough for a person to jump across it.“The Jordan River is so heavily degraded it has lost 95 percent of its historical flow over these last 50 years. It has been a dumping ground of waste, raw sewage, saline waters, and fishpond waste,” said Gidon Bromberg, Israeli director of EcoPeace Middle East.“An estimated 50% of the river’s biodiversity has been lost and the river is in a terrible state,” Bromberg said. “There is nothing holy about it today,” he added.The master plan calls for the introduction of 127 regional and national projects through 2050, at a cost of some $4.5 billion. It includes projects on the environment, pollution, water management, agriculture, and tourism.The plan also includes a list of short-term projects over the next five years that would cost some $500 million and include cleaning up the Jordan River.Part of the plan is a waste water treatment plant to stop the flow of sewage into the river from the Israeli and Jordanian sides. In 2013 Israel released some nine million cubic meters of fresh water into the river from Lake Kinneret (the Sea of Galilee) to help strengthen it, Bromberg said, adding that it plans to increase that amount in future years.All the projects under immediate consideration would be built either within the Green Line, in Jordan, or in Palestinians areas of the Jordan Valley that are now under Israeli military and civil control. There are no projects planned for Israeli settlements or that would strengthen Israel’s hold on the sections of the Jordan Valley that are over the Green Line. The Jordan Valley has 22 settlements that are home to some 5,000 Israelis.The plan assumes that the Jordan Valley would eventually be part of a Palestinian state, even though there is much opposition in Israel to relinquishing the valley, which many believe is vital to the nation’s security.But there are many aspects of the project that can move forward without a diplomatic solution to the Israeli-Palestinian conflict.