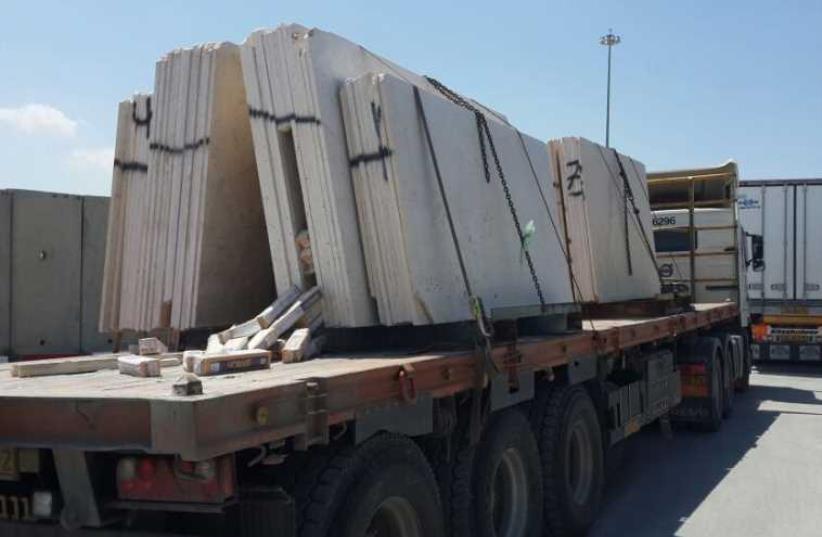 Defense Ministry security inspectors confiscate thousands of electrodes at Gaza crossing
(photo credit: ADMINISTRATION OF BORDER CROSSINGS)
Defense Ministry inspectors at the Kerem Shalom crossing intercepted a shipment of thousands of welding electrodes that were on their way Monday from the West Bank to terrorist groups in the Gaza Strip.It was the third time goods destined for terrorists were intercepted in the past two weeks.“This is one of the biggest captures at Kerem Shalom crossing since Operation Protective Edge,” the Defense Ministry said, referring to the war in Gaza last summer.The electrodes could be used by terrorist organizations to weld rocket fins and other projectile parts, and to create a range of explosive devices.The inspectors, from the Defense Ministry’s Crossing Points Authority, found the electrodes – carried by an Israeli truck – hidden inside a partition between marble slabs.“During the search, a huge shipment of thousands of electrodes was discovered,” the ministry added.The Shin Bet (Israel Security Agency) and the Tax Authority took part in the interception.Last Monday, Defense Ministry security guards at Kerem Shalom stopped an attempt to smuggle advanced electronics.In that interception, made jointly with the Shin Bet and the Coordinator of Government Activities in the Territories, guards located infra-red cameras, communications devices and remote-control security cameras.“The items were hidden in an Israeli truck that was carrying communications equipment to the Gaza Strip,” the ministry said. “Security elements are continuing the investigation.”Since January of this year, the Crossing Points Authority prevented more than 100 smuggling attempts of banned goods that were sent to terrorist organizations in Gaza.