More than 8,500 rockets have fallen on the southern Israeli city since 2001.

By SETH J. FRANTZMAN, ILANIT CHERNICK
DECEMBER 10, 2017 22:47
Sderot recovers after rockets launched from Gaza over the weekend, December 10, 2017
Advertisement
In the wake of Friday night’s attack on Sderot in which rockets hit a residential street and a kindergarten in the southern city, residents of the area have expressed fear and concern.A small but deep gaping hole could be seen clearly on Halutz Street, in front of a white car that was marked with shrapnel and holes.  The Ashurov family, who live across the road from the scene, told The Jerusalem Post they heard the red alert siren about 10 minutes before the rocket hit outside their home. “We heard the siren for the rocket that hit the [nearby] kindergarten. It was around 9:30 p.m. – it was before this rocket hit,” said Moria Ashurov, a mother of two small children. “This was not a regular Kassam rocket. It looked like it was made from [Israeli] military parts. There was a Hebrew letter on it and it was a lot smaller. The code red siren never went off,” she explained.Ashurov said she had not gone to work on Sunday because she feared another rocket attack. “For myself, I’m not afraid, but I worry about my children. They play out here in the courtyard all the time. It’s such a hard situation. But I would never leave – I was born here, grew-up, my life is here,” she said.

Ashurov’s mother, Pnina Sinai, who was also in the home when the rocket hit, said she heard the rocket hit. “But it was a small bang,” she said. “It wasn’t the usual sound. It was not so loud. It came after the sirens for the kindergarten rocket.”Sinai, who moved to Sderot in 1979, said she loves Sderot despite the threats. “I never thought of leaving. The mayor is doing a lot to develop the city.”The Ashurovs have turned their protected room into a playroom, which they have lined with gray foam acoustic panels to keep out noise from red alert sirens and the explosions of incoming rockets. Colorful kids’ toys were stacked in two corners for the children to play with, even during times of conflict, without being traumatized by the sounds.“On Friday night, we all slept in there because we were not sure if there would be more rockets,” Ashurov added.
Sderot brief with Seth J. Frantzman
Dar Cohen, from the Sderot Media Center, said more than 8,500 rockets have fallen on Sderot since 2001. He said that every house has protected safe rooms because of the threat, and schools have reinforced roofs for protection. Both Ashurov and Cohen were surprised that two of the rockets fired on Friday were not intercepted by the Iron Dome air-defense system.Cohen explained that the first siren went off in the city at about 6:15 p.m. Friday. “This rocket was intercepted but the two that fell between 9:30 p.m. and 10 p.m. fell within the city – none of them were intercepted,” he said.Cohen called the attack – the first time in about a year in which a rocket had fallen within the city – “very traumatic” for residents of Sderot. “It brings back a lot of the traumatic times they faced before, in 2014 and during other wars. There’s always the worry it will start again. Basically, everyone in the city went to sleep in the bomb shelters on Friday night,” he said. “At a tense time like this, with the US acknowledging Jerusalem as the capital [of Israel], in the Gaza Strip, they [the Palestinian terrorist groups] are not finding that too nice, so they’re using it as a good excuse to launch rockets at Israel,” Cohen said. “Unfortunately, the people who are suffering from this are the people here in Sderot. There is no military base here, yet 8,500 rockets have managed to fall here, which makes innocent civilians, including children, the targets here. This city has suffered from a lot of post-traumatic stress. You can never be fully mentally prepared. He added, “You can go to any random person in the city and they’ll tell you a family member or friend has suffered from PTSD.” Despite the rocket fire of the past decade or so, the city has continued to grow, attested to by the plethora of cranes seen against the skyline, noted Cohen. New neighborhoods are being built and older ones expanded. A large shopping complex was also built recently.Cohen said it was a mixture of both idealistic and financial reasons that led to the growth of the city.“Right now, there are 25,000 residents living in Sderot, but in the future there will be double that. Despite the security situation, people are still choosing to move into Sderot. Sderot will show you the true face of Israel. There is a real resilience of the people of this city,” he added. At Gan Rimon Kindergarten, where the first rocket hit, a window was clearly damaged, with a large hole in the glass. Shrapnel also hit the side of a classroom. However, on Sunday, life seemed to have returned to normal and the shouts of laughter from children could be heard. 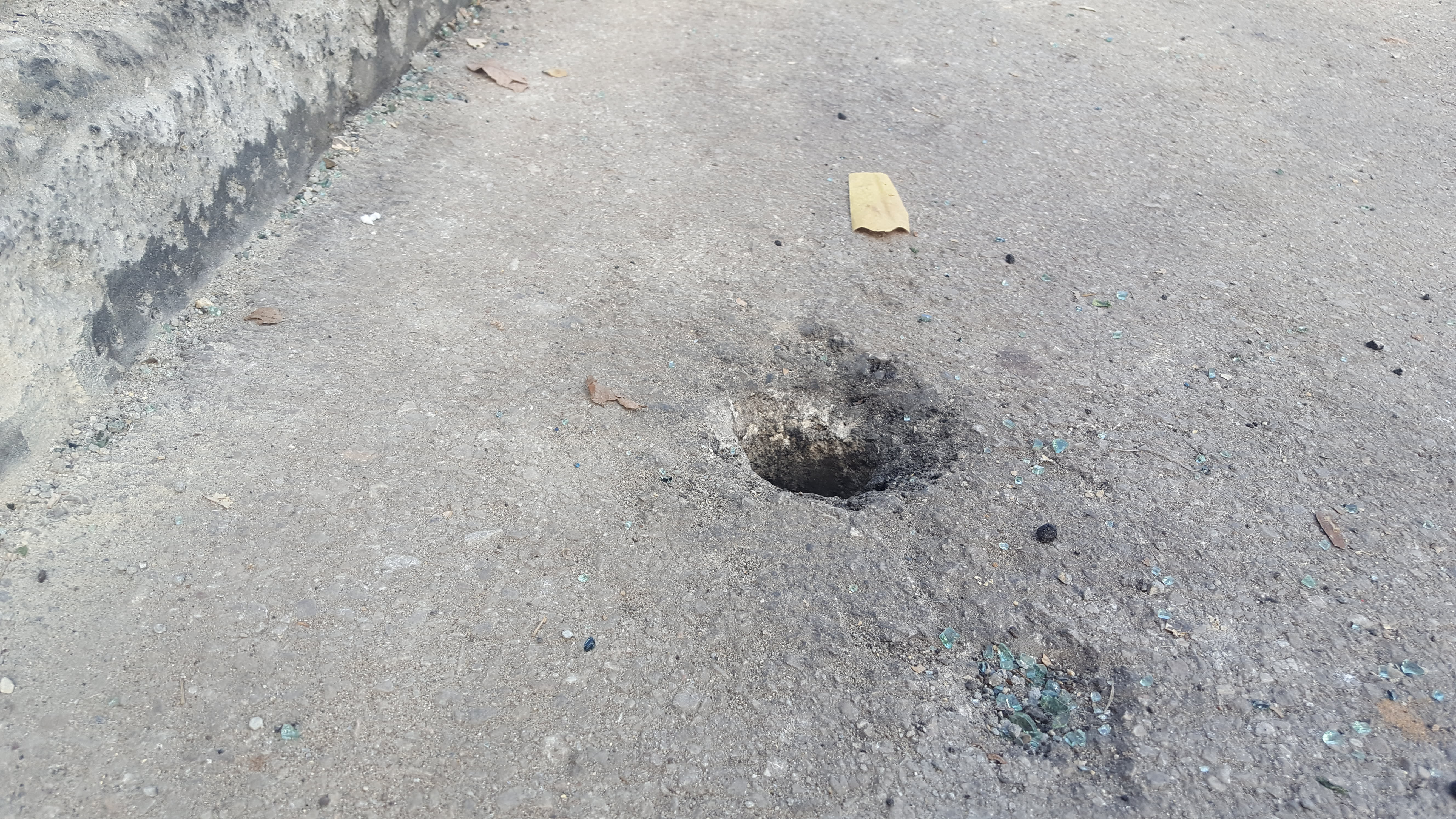 The remnants of the damage caused by a rocket that hit Sderot on Friday night. (photo: Ilanit Chernick)Cohen said that all kindergartens in the city were reinforced to withstand the impact of a rocket. “When the siren goes off, they [the children] sing really loudly so they can’t hear the rocket hit.”At the new mall near the train station there was also a buzz of activity. Young men and women sat outside at several restaurants. Three Beduin women – students from the nearby Sapir College – said they had come from Hura, a Beduin town near Beersheba, to study. All three blamed the renewed rocket fire on US President Donald Trump’s announcement of Jerusalem as the capital of Israel and said they were a bit afraid the heightened tensions between Gaza and southern Israel would lead to more rocket attacks. “It’s the Palestinian capital – it belongs to Palestine,” said one of the young women, who asked to remain anonymous. The other women disagreed. “It belongs to everyone, to the Jews and to the Muslims. What Trump said is wrong and it’s caused a problem. It should not be the capital of Israel or Palestine – it should be shared,” they said. “Now that he [Trump] has said this, there will be attacks and rockets again. It’s scary and it’s not good for either side or for peace,” they added.