“I had horrible ideas about [Jews] before I joined this group,” said one Palestinian participant who now counts Jews among his friends. 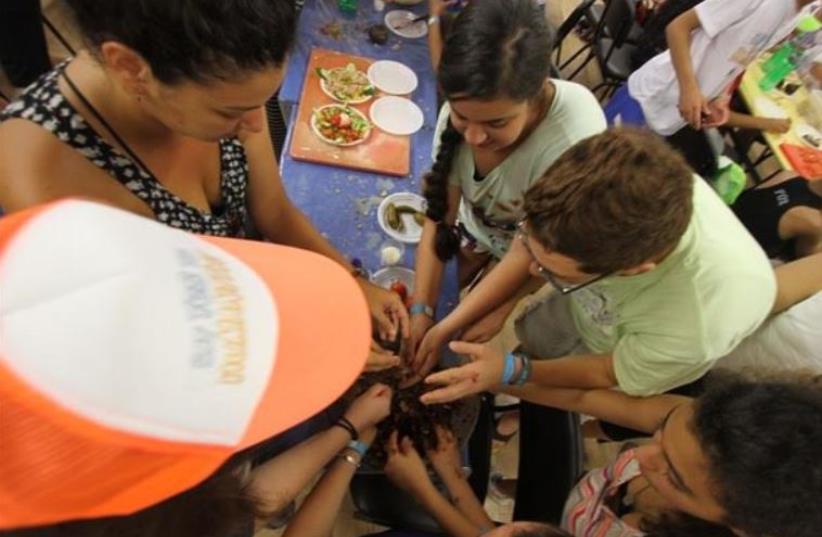 Campers participate in a ‘ MasterChef ’ tournament at the Wings of Peace camp located on Yanai beach this week
(photo credit: KMP)
Advertisement
During the summer months, three camps that bring together Jewish, Arab and Palestinian youth are seen by many as an oasis of peace in an otherwise troubled reality.The first is one of many camps organized by ILAN – The Israeli Association for Disabled Children, which take place annually in host kibbutzim and moshavim across the country.Rosh Tzurim, a religious kibbutz in the West Bank, hosted 11 children with physical disabilities, including three Arab-Israelis. It has been hosting the camp for the past 25 years.According to Noga Feingold, who runs the camp, the youth from the kibbutz do everything for the kids from ILAN, including helping them with their physical needs throughout the day, and every camper is hosted by a family on the kibbutz.While some parents of the Arab-Israeli kids have been nervous about sending their children to the religious kibbutz beyond the Green Line, and one father even came to visit the kibbutz before allowing his son to attend, the children all end up having a wonderful experience.The Wings of Peace camp, which brings together Palestinian and Israelis, was organized by the educational organization Kids Creating Peace and funded by USAID.The 13- to 17-year-old participants meet on a weekly basis throughout the year, and then enjoy a weeklong sleepaway camp together.Amy Abebe-Campiano, a 16-year-old from Shoham, said that her family was very much in favor of her attending the camp.“I had never met a Palestinian,” she said. “I wanted to get to know them beyond what we hear in the news.”Muhammad is a 16-year-old boy from the Shuafat refugee camp in Jerusalem. Muhammad is not his real name, as he worried about repercussions in his neighborhood.“I do not want problems at home in my town,” he explained. “It might endanger my life.”His participation in the program marked his first encounter with his Jewish-Israeli peers.“I had horrible ideas about [Jews] before I joined this group,” he said, adding that “I imagined them in my head like monsters with horns and red eyes.”Now, he said, he knows better. He counts the Jewish participants in the program among his friends.Haya, a 23-year-old counselor from east Jerusalem, requested that her last name not be used.She said there is some tension during the first meetings between the kids, but it eases after the initial encounter.Haya said she hopes that the interpersonal connections they make at this age help create a future that is more peaceful. She believes that it can prevent violence.The Wings of Peace camp ended on Thursday, but participants can look forward to their weekly meetings throughout the year.Perhaps the most unique of all the camps is to take place between Jews from Judea and Samaria and their neighbors from surrounding Palestinian villages.Due to security concerns, the camp has asked that details about the location and the people involved remain anonymous, as reconciliation with Israelis, especially with those from Judea and Samaria, is far from acceptable on the Palestinian streets these days.The camp takes place in a “no-man’s-land,” near the Jewish settlements, on an empty piece of Palestinian farmland, where both sides feel comfortable.When asked if the parents are worried about sending their children to the three-day camp, one of the founders answered that “[a] lot of the parents who send their kids are worried about not meeting the Palestinians – about what happens to kids when they grow up in such a close environment but they don’t meet the other side.”He went on to say that many of the parents in the area are enthusiastic about the camp that is based “on our fundamental belief... [that] when people meet the other side, a lot of stereotypes just break down...”According to the camp coordinator, the language difference presents a barrier in terms of fostering deep dialogue between the children, but kids can simply be kids, playing sports together, participating in activities and become friends.