Despite removing the controversial metal detectors, Muslim worshipers - at the urging of their religious leaders - are still praying outside the gates of the compound. 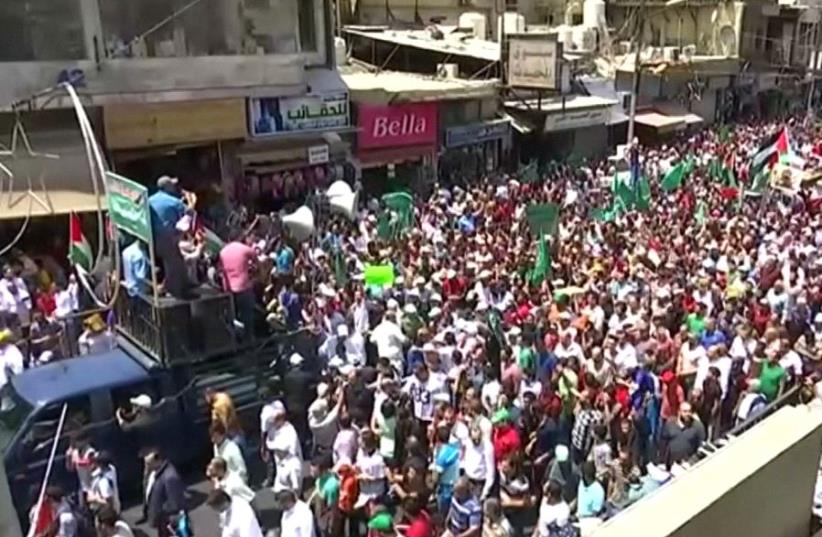 Temple Mount protest Jordan July 21 17
(photo credit: REUTERS)
Advertisement
“We won’t go to pray [on the Temple Mount] until the cameras are removed,” a shopkeeper said on Wednesday, as Muslims prepared for afternoon prayers.As in the past weeks since the July 14 terrorist attack, hundreds gathered outside the gates leading to the Temple Mount and al-Aksa Mosque and prayed on the stone streets of the Old City.At the Gate of the Tribes, a focal point for the prayer protests, about a hundred women showed their support.Around 1 p.m. they lined up for prayers while men came and handed out prayer rugs to those didn’t have. A young boy sprinkled water from a jug onto the worshipers. It was 36 degrees in the Old City, hot and sweaty.The women came earlier in the day from around Jerusalem and held impromptu Koran classes. Some rested, while others took water from men passing out bottles for free.A community has grown around Lions’ Gate over the past two weeks, with prayer leaders coming and going as locals gathered to protest against Israeli policy.Israel removed the contested metal detectors on Tuesday, after they were installed following the terrorist attack but this did not assuage the prayer protests. Rumors on social media also claimed Israel was digging up parts of the pavement outside the Gate of the Tribes and that the “cameras show naked bodies of Palestinian worshipers.”Israeli police knows the situation is combustible.On Tuesday night clashes broke out and tear gas was fired, according to videos posted of the incidents. Palestinian media claimed two journalists were wounded near Lions’ Gate, along with dozens of protesters.The metal detectors are gone, but it appears new metal guide-ways have been installed, the kind one might have to keep people in line at a movie theater or fastfood restaurant.All of this has angered the worshipers as well as several foreign countries. A Kuwaiti politician condemned Israel, as has Turkey’s President Recep Tayyip Erdogan, and Pakistan.Walking around the Old City on Wednesday most things seemed calm. Tourists went about fumbling for maps, getting lost and were also harassed by shop owners.A tourist map and an explanatory sign near the Church of Saint Anne were covered in stickers supporting al-Aksa, with Arabic writing and a photo of the Dome of the Rock.A crowd of Jewish youths on the Via Dolorosa feared entering the Lions’ Gate area, while a large number of Muslims prayed, as it could lead to altercations.Their tour guides and security hastily asked local Special Patrol Unit (Yasam) riot police where they should go.The police sent them down to the Austrian Hospice on Hagai Street, al-Wad Street in Arabic, where the group promptly got flustered again.On Wednesday, police also asked journalists to keep their distance and in some cases asked them to refrain from taking pictures.A video posted online showed perhaps why. In it, a woman was filmed shouting at police about the victory of Allah over Israel.The security forces allegedly feel that media presence may encourage incitement and clashes.Another video showed a journalist being removed from the area near the Gate of the Tribes.Without cameras present, the prayers seemed to end relatively peacefully.In any case, the removal of the metal detectors has not put much of a dent in the protest movement.