Ya'alon: Israel will destroy Lebanon's infrastructure in next war

"If Khamenei wants war. then Lebanon will go to war, and every Lebanese [person] will suffer from the next war." 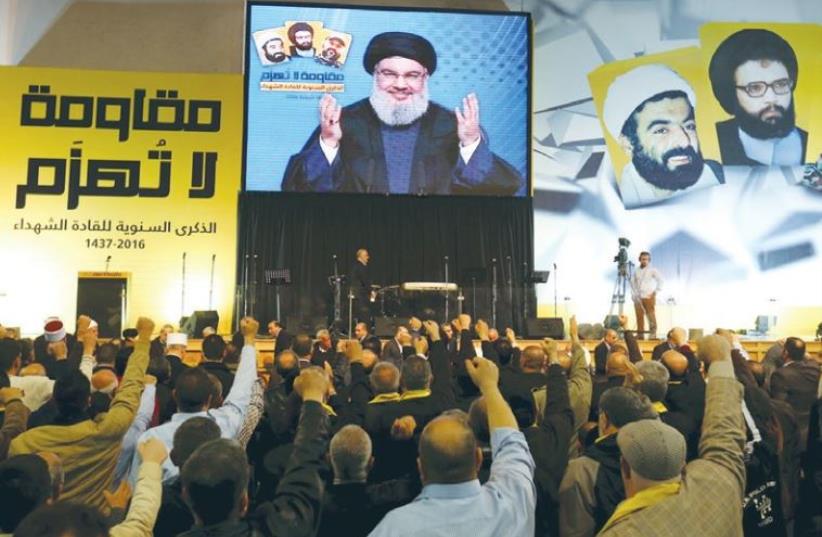 HEZBOLLAH LEADER Hassan Nasrallah addresses his supporters via a video link in Beirut, February 16, 2015
(photo credit: REUTERS)
Advertisement
Former defense minister Moshe Ya'alon said Sunday to a Saudi news website that the decisions in Lebanon are made by the Iranian supreme leader, Ali Khameini, and not by Hezbollah leader Hassan Nasrallah. In the interview on the London-based "Elaph," Ya'alon pointed to Iran as governing the actions of Hezbollah, its proxy group in Lebanon, and the possible implications for Israel. "There is no nation called Lebanon, the decisions are made by Iran and not by the president or Nasrallah," Ya'alon said. "If Khamenei wants war, then Lebanon will go to war, and every Lebanese [person] will suffer from the next war because all infrastructure will be destroyed." Regarding weapons manufacturers in Lebanon that were built by Iran, the former minister said, "I am sorry that the matter arose in the media before their destruction."Israeli officials have said that since the Second Lebanon War in 2006 Hezbollah has taken deeper control of the country and that Lebanon is now more directly supporting Hezbollah’s military efforts.Preventing Hezbollah from improving the accuracy of its amassed projectile stockpile is the “top priority” of the army, IDF Chief of Staff Lt.-Gen. Gadi Eisenkot earlier in July. According to Israel estimates last year, Hezbollah has more than 120,000 missiles in its possession. Israeli Ambassador to the UN Danny Danon told the UN Security Council last July that Hezbollah has multiplied its stock of projectiles by 17 times the amount of missiles it had 10 years ago. Hezbollah vowed to “surprise Israel” during any upcoming war, upping the war of words between the Lebanese Shi’ite terror group and Israel.In an interview with Hezbollah’s Al-Manar TV channel on the 11th anniversary of the Second Lebanon War, the head of the group’s Executive Council Sayyed Hashem Safieddine said that Hezbollah has been changing and developing new military capabilities.At a briefing with journalists last week Defense Minister Avigdor Liberman warned that the smuggling of sophisticated weaponry to Hezbollah was a redline for Israel, which will continue to act to prevent the group from getting them.“We take everything seriously. We are certainly aware of the reports and we will do what needs to be done. This is a significant phenomenon and we cannot ignore it. Precise weapons such as these missiles are a challenge. Compared to past wars they will hit deep inside Israeli territory,” Liberman said.Turning to the civil war in Syria where Hezbollah has sent ground forces, Ya'alon said that "Israel holds red lines." He also denied Syrian President Bashar Assad's claims that Israel supports al-Qaida splinter ground Jabat Al-Nusra and other jihadi organizations." He also spoke on the relationship between Israel and Gulf states, emphasizing that "the relationship is based on mutual interest, and the issue of uncovering this coordination is in the hands of those states."The former minister emphasized that at this stage this is no possibility for a final solution with the Palestinians, but there is for economic and security coordination, while tightened the embargo on Hamas. "Mahmoud Abbas is shying from responsibility, and is afraid to take responsibility,"  he said. "He has disappointed the Saudi's and the Egyptians."Anna Ahronheim and Yonah Jeremy Bob contributed to this article.