Breaking news
(photo credit: JPOST STAFF)
Advertisement
Years ago, I was awaiting with anticipation for the oral defense of my doctoral dissertation with Professor Elie Wiesel. The culmination of 11 years of study with him, needless to say I was disappointed to receive notice that the defense would be postponed. The reason: a meeting with President Obama. Wiesel’s appreciation of Obama was borne from his self-proclaimed commitment to humanity, civilization, and the potential for ethical clarity in a world in flux. After his passing this year, it would seem that the void enabled the world leader to take an action he would not have attempted with Wiesel still alive.  As the "moral compass for humanity," Wiesel directed his energy not only to the transmission of Holocaust memory but to the protection of human rights for all mankind, drawn from his personal experience of suffering when "not all victims were Jews, but all Jews were victims." He put a mutual emphasis on the need to remember and to take action, on the value of life, and the importance of dignity. He understood, with every fiber of his being, the essential connection between the Jewish people and our Jewish homeland. He recognized the unique reality that Israel faces being the "Jew of the world" - eternally hated, resentted, and demonized by the endless litany of countries and peoples determined to wipe out the Jewish nation.

Moreover, Wiesel, the tireless defender of peace, understood that the connection we as Jews have to our homeland is intricate to our collective and individual identity. In his powerful statement on Jerusalem, Wiesel wrote:
Jerusalem is above politics… It is mentioned more than six hundred times in Scripture, and not a single time in the Koran. It belongs to the Jewish people and is much more than a city, it is what binds one Jew to another in a way that remains hard to explain...
Since King David took Jerusalem as his capital, Jews have dwelled inside its walls with only two interruptions; when Roman invaders forbade them access to the city and again, when under Jordanian occupation, Jews, regardless of nationality, were refused entry into the old Jewish quarter to meditate and pray at the Wall, the last vestige of Solomon's temple.
The anguish over Jerusalem is not about real estate but about memory. Jerusalem is the heart of our heart, the soul of our soul.
For Wiesel, Israel’s existence as the holy land was integral to our existence as the Jewish people. Moreover, he saw it as a component of how we as a nation uphold the legacy of the Holocaust and deliver a message of hope, peace and respect between people worldwide.
In his eulogy of this great master of thinkers, Obama said, “He implored each of us, as nations and as human beings, to do the same, to see ourselves in each other and to make real that pledge of 'never again.’”  It is that same philosophy that drives the passion of the families who want only to live in the land of our forefathers, to which we rightfully and legally returned after the Six Day War.
If, or when, there might ever be a viable Palestinian state established in these lands, it can only be one curbed of all incitement to terror, hate education, and determination to destroy Israel and the Jewish nation. Sadly, these are not requirements of any peace proposal thus far, and the gathering of leaders in Paris is determined only to further distance us from this possibility.  But should it ever happen, in whatever form, we must ensure that this land remains the indigenous homeland of the Jews and Elie Wiesel understood that we must stand by that birthright and protect it for eternity.
"Jerusalem, the eternal capital of Israel, symbolized to him our ability to lift ourselves up from the very bottom to reach new heights," Netanyahu once said of Wiesel’s love for our ancestral capital.  Just as he implored us to become the witnesses to the witness of the Holocaust, so, too, are we the heir to the ancestral heritage of our forefathers. Their land, their remnants, their faith, their commitment, their hope. They are we, we are them.

Whether one supports the pioneering communities returning to the physical land of our origin as a nation or not, and whether one believes in a one or two state solution, our connection with our homeland has lasted for over 3000 years and we cannot let that bond break now. And for one who considered himself as a friend and student of Elie Wiesel, as many of us did, Obama betrayed the very foundation of what made Wiesel the “conscience of the world.”

As we enter into a new era of political leadership for the United States, and continue to learn to live in a world without the profound contributions and eloquence of Elie Wiesel, let us not forget his call that we must never be bystanders to injustice or indifferent to suffering; that silence only assists the perpetrators. In the growing climate of socially-acceptable Antisemitism and anti-Israel rhetoric and political action, it is incumbent upon us to demand that which Wiesel proclaimed in his Nobel Peace Prize acceptance speech, “Let Israel be given a chance, let hatred and danger be removed from their horizons, and there will be peace in and around the Holy Land.” He implored of the world that forgetting the Holocaust would be akin to killing the victims a second time. Now we must carry that legacy.

So, too, must we show the world that forgetting our ancestral connection as an indigenous people of our Land of Israel is enabling another, different albeit dangerous onslaught against the Jewish People. It may not be through extermination of our bodies. Instead through dehumanization and demonization, perpetuated by those who believe themselves capable of whitewashing our historical legitimacy and rights. Destructive to the spirit and humanity of every Jew, everywhere, in every generation before or after us, we must perpetuate the very resolve of which Wiesel spoke and which led his every endeavor: to do for the Jewish people and the Jewish land, “where the stones themselves tell the story of the only people of antiquity to have outlived antiquity.” 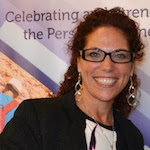 Dr. Elana Heideman
Dr. Elana Yael Heideman, Executive Director of The Israel Forever Foundation, is a dynamic and passionate educator who works creatively and collaboratively in developing content and programming to deepen and activate the personal connection to Israel for Diaspora Jews.  Elana’s extensive experience in public speaking, educational and organizational consulting, and analytic research and writing has served to advance her vision of Israel-inspired Jewish identity that incorporates the relevance of the Holocaust, Antisemitism and Zionism to contemporary issues faced throughout the Jewish world in a continuous effort to facilitate dialogue and build bridges between the past, present and future.