Researchers are optimistic that this research could be applied to patients in physical therapy programs who have lost the strength or control of one hand. 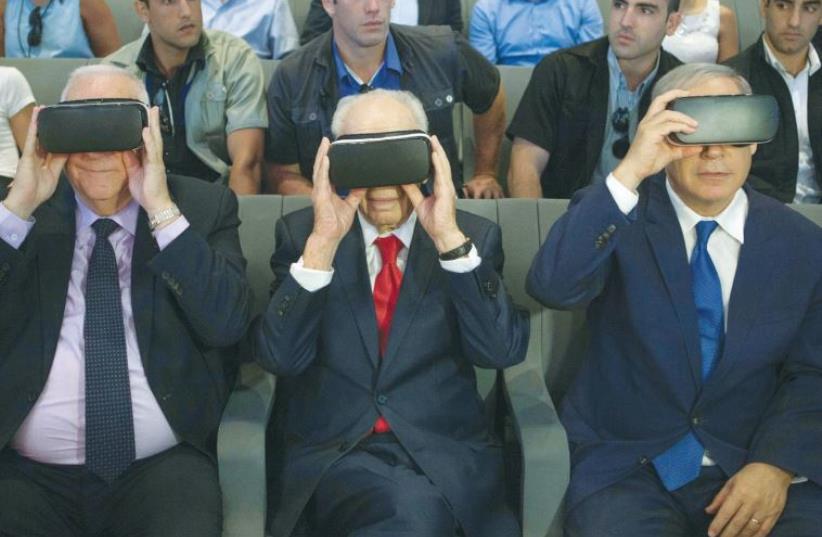 PRESIDENT REUVEN RIVLIN, former president Shimon Peres, and Prime Minister Benjamin Netanyahu don virtual reality goggles at the Peres Center for Peace and Innovation in Jaffa
(photo credit: REUTERS)
Advertisement
A combination of physical therapy and virtual reality technology could improve the motor skills and mobility of an impaired hand by having the healthy hand lead by example through virtual reality training, say researchers at Tel Aviv University’s School of Psychological Sciences and the Sagol School of Neuroscience.The research was published in the journal Cell Reports. The researchers are already examining the applicability of their novel training scheme to stroke patients.“Patients suffering from hemiparesis – the weakness or paralysis of one of two paired limbs – undergo physical therapy, but this therapy is challenging, exhausting, and usually has a fairly limited effect,” said lead investigator Prof. Roy Mukamel, who conducted the research with student Ori Ossmy. “Our results suggest that training with a healthy hand through a virtual reality intervention provides a promising way to repair mobility and motor skills in an impaired limb,” said Mukamel.A total of 53 healthy participants completed baseline tests to assess the motor skills of their hands and then strapped on virtual reality headsets that showed simulated versions of their hands. The virtual reality technology presented the participants with a “mirror image” of their hands – when they moved their real right hand, their virtual left hand would move.In the first experiment, participants carried out a series of finger movements with their right hands, while the screen showed their “virtual” left hands moving instead. In the next, participants placed motorized gloves on their left hands, which moved their fingers to match the motions of their right hands. Again, the headsets presented the virtual left hands moving instead of their right hands.The research team found that when subjects practiced finger movements with their right hands while watching their left hands on 3D virtual reality headsets, they could use their left hands more efficiently after the exercise. But the most significant improvements occurred when the virtual reality screen showed the left hand moving while in reality the motorized glove moved the hand. “We effectively tricked the brain,” said Mukamel.“Technologically, these experiments were a big challenge,” he continued. “We manipulated what people saw and combined it with the passive, mechanical movement of the hand to show that our left hand can learn even when it is not moving under voluntary control.”The researchers are optimistic that this research could be applied to patients in physical therapy programs who have lost the strength or control of one hand. “We need to show a way to obtain high-performance gains relative to other, more traditional types of therapies,” concluded Mukamel. “If we can train one hand without voluntarily moving it and still show significant improvements in the motor skills of that hand, we’ve achieved the ideal.”
Sign up for the Health & Wellness newsletter >>