"There has never been a more important time for US Christians to stand with Israel," says chairman. 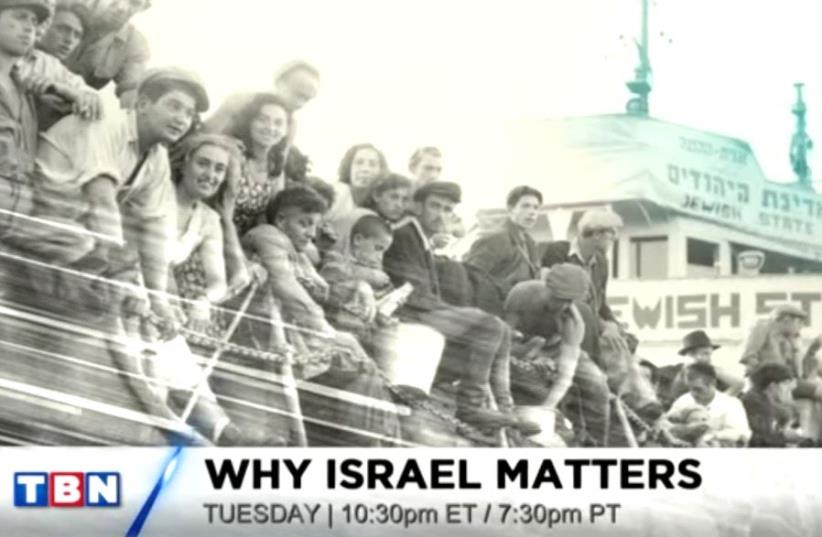 A screenshot of the trailer.
(photo credit: TBN)
Advertisement
A partnership of Christians groups have collaborated to create a series called “Why Israel Matters,” which intends to set the record straight on Israel and the Jewish state. Christians in Defense of Israel (CIDI), Liberty Counsel and the Trinity Broadcasting Network (TBN) produced the 13-part original series that demonstrates the crucial importance of the Jewish state to Christians, to the United States and to the world in general. The first episode, which debuted February 28, can be seen online on TBN. At the end of each week’s airing, the Christian television network posts the episode on its website. The second episode will air March 7.“Even though I have lived with this series for over two years and reviewed the rough cut version, I was still moved by the impact of this powerful story about Jews being drawn to Israel from around the world,” Mat Staver, chairman of Christians in Defense of Israel and Liberty Counsel, said.Filmed in the Holy Land and featuring a multitude of guests, “Why Israel Matters” explores how such a small country plays such an important role in the world.It reveals how the miracle nation sprung up from its biblical roots and went through a heartbreaking history after having its two temples destroyed and becoming a scattered people, finally reemerging as an independent nation, just as the prophets foretold, and today is the role model of a hopeful, persevering and courageous nation, inspiring the world throughout with its successes in every field.Each week, host Mati Shoshani, an expert on Israeli history and the director of operations at TBN, the world’s largest religious television network, guides viewers through the fascinating elements of Israel’s still-unfolding narrative.In the first episode, called “Homecoming,” Shoshani presents three stories that capture the beauty of the Jewish people coming home to their ancient homeland.Peppering his narration with quotes from the Bible, in the first story, Shoshani interviews Jews from Kaifeng, China, revealing how even in a far-off region, they never lost touch with their roots. Jin Jin, a Chinese Jew speaking in broken Hebrew, recalls her father telling her about her heritage “One day you must return to Eretz Yisrael [the Land of Israel],” Jin says her father told her. “Because it is the land that God has given us.”Former member of Knesset, Pnina Tamano-Shata, the first Ethiopian-born woman to hold a position in the Knesset, and Hanna Goslar, a Holocaust survivor who lived next to Anne Frank while their two families found refuge in Amsterdam, echoed Jin Jin’s feelings – after their trials and tribulations in the country where they were born, there was only one place that they could truly call home.“There has never been a more important time for Christians and others of good will across America and around the world to stand in solidarity with the nation and people of Israel,” said Staver.“‘Why Israel Matters’ is designed to help viewers grow in their understanding of the strong bond each of us shares with Israel through our faith, our heritage and our worldview. Every viewer will be inspired and empowered to be thoughtful, compelling participants in the global conversation about Israel.”The next three episodes will be: “Neighbors,” how Israel has survived and thrived in the hostile Middle East; “Miracles,” a look at Israel’s advances in technology, agriculture and military security; and “Survivors,” how Israel’s past gives its citizens courage and perseverance to thrive and prosper.
sign up to our newsletter