There were 1,986 acts of antisemitism in the US last year. 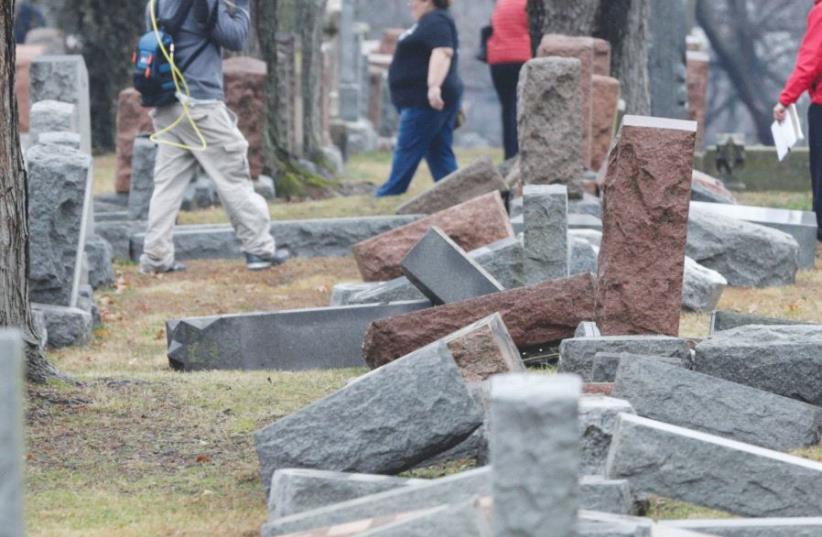 A ROW of more than 170 toppled Jewish headstones is seen after vandals attacked a Jewish cemetery near St. Louis, February 2017
(photo credit: REUTERS)
Advertisement
The number of antisemitic incidents was nearly 60% higher in 2017 than in 2016, the largest single-year increase on record, according to a report the Anti-Defamation League released on Tuesday.There were 1,986 antisemitic incidents reported across the United States in 2017, including 1,015 incidents of harassment, 952 incidents of vandalism, and 19 physical assaults, reported in ADL’s Audit of Antisemitic Incidents.That represents a 57% increase over the 1,267 incidents in 2016. Every part of the country was affected, with an incident reported in all 50 states for the first time in at least a decade.The number is the second highest reported since ADL started tracking incident data in the 1970s.The incidents of harassment included 163 bomb threats against Jewish institutions, many of which were found to be the doing of an Israel teenager, who was arrested.The sharp rise in overall incidents was in part due to a significant increase in incidents in schools and on college campuses, which nearly doubled for the second year in a row. There were 457 antisemitic incidents reported in non-Jewish schools, up from 235 in 2016 and 114 in 2015. Jewish institutions and schools also saw incidents double, jumping from 170 in 2016 to 342 last year. Meanwhile, college campuses saw a total of 204 incidents in 2017, compared to 108 in 2016.“The consistent increase of antisemitic incidents against students of all ages is deeply troubling,” said Jonathan Greenblatt, ADL CEO and national director. “We know that students do not always report when they are being bullied, so for every incident that’s reported, it is likely there’s another that goes unreported. This is why it is imperative for schools to have anti-bias and anti-bullying programs, and why we are committing to take our ‘No Place for Hate’ program into more schools this year.”The largest increase in 2017 was in the category of vandalism. In the vast majority of vandalism cases the perpetrators remain unidentified, the ADL said.Another reason for the rise in recorded antisemitism is that more people are reporting incidents to ADL than ever before.“A confluence of events in 2017 led to a surge in attacks on our community – from bomb threats, cemetery desecrations, white supremacists marching in Charlottesville and children harassing [Jewish] children at school,” said Greenblatt. “These incidents came at a time when we saw a rising climate of incivility, the emboldening of hate groups and widening divisions in society. In reflecting on this time and understanding it better with this new data, we feel even more committed to our century-old mission to stop the defamation of the Jewish people, and to secure justice and fair treatment to all.”ADL’s response to these incidents includes educating youth to prevent these behaviors and working with law enforcement to apprehend the perpetrators. ADL trains 15,000 law enforcement officials per year, provides anti-bias training to a wide range of people, including to every new FBI agent, and reaches 1.5 million kids in schools with its anti-bias and anti-bullying training. ADL is sharing policy recommendations with members of Congress and other government leaders, calling on them to: “Pass legislation to expand federal protections against bomb threats to religious institutions; use their platforms to speak out against all acts of hate and support efforts to punish this conduct to the fullest extent of the law, while providing comfort and assistance to individual victims and community members.”College and university administrators, faculty and staff must receive the necessary training to effectively respond to antisemitic incidents, hate crimes, hate speech, and extremism on campus, the organization added.