Holocaust survivor shocked that antisemitism is on the rise

“It starts with words,” Max Eisen says at every opportunity, “and ends up in very bad places.” 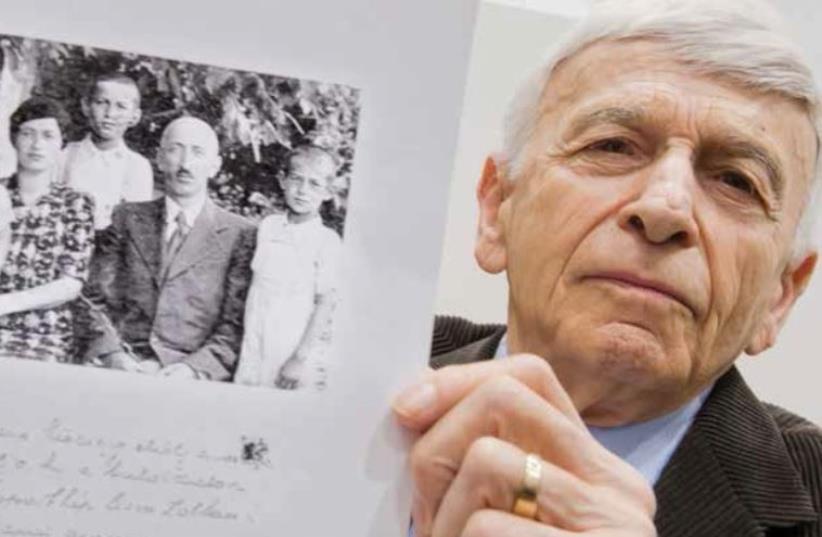 Auschwitz survivor and plaintiff Max Eisen holds a photo of himself and his Hungarian Jewish family before their deportation during the Holocaust
(photo credit: AFP PHOTO)
Advertisement

When he landed in Canada at the age of 20, a short few years after the Holocaust had wiped out his family, he did not expect he would ever see antisemitism take on the shape of the Jew-hatred he had experienced in Nazi Germany. Yet that is exactly what he sees happening in North America now, especially in the United States.

Talking with Holocaust survivor Max Eisen on the phone, you can easily mistake his voice for that of a young man. At 90 years of age, he still speaks at venues across Canada, keeping his promise to his father to keep the memory of the Holocaust alive.

This year marks the 20th time he will be at March for the Living, a march that goes from Auschwitz to Birkenau to commemorate the memory of the victims of the Holocaust. “Through his lectures and the March,” Canadian National Director of the March Eli Rubenstein says, “Eisen has probably educated over 100,000 students and adults. Those who learn from him are filled with gratitude for the experience.”

Eisen spoke with The Jerusalem Post about contemporary antisemitism in Canada:

"Throughout my working years, as a businessman interacting with Jews and non-Jews, I never experienced antisemitism. I was aware of the fact that Canadian universities had had quotas for the number of Jews they were willing to admit, that the banking industry did not hire Jews and that Jews need not look for a home in a certain neighborhood in Toronto. But that ended in the 1960s and it had never affected me personally. "In the early 1990s, I was aware of growing antisemitism and it upset me. "The turning point came with the Durban Conference of 2001, when Israel was labeled an apartheid state and Zionism was equated with racism. That was the beginning of the BDS – Boycott, Divestment and Sanctions campaign."BDS is a big problem for me because what starts with words ends up with horrible things."

What about BDS is so troublesome?

"Some of the extremist statements against Israel emanating from the BDS movement remind me of the propaganda used by the Nazis against the Jews in the Holocaust era. To single out for extreme criticism the only Jewish state in the world the way the BDS movement does with Israel, in many cases has roots in anti-Semitic feelings and will inevitably lead to more antisemitism."

March of the Living is, for you, an opportunity to provide an educational experience for young Jews and adults, is it not?

"Yes. I feel that the survivors who go with the groups look at Jews as a chain where every single link has to be strong. We are a strong people. The survivors and the 2nd and 3rd generations are strong and we need future generations to pick up the ball and run with it, to carry the torch into the future. Weak links in the chain are not good for us. A weak link is the uneducated and unaware. The March is one way to raise awareness and educate Jews and non-Jews alike about antisemitism and hatred."

It seems like quite a challenge to engage with young people, especially about history. How do they respond to your lectures?

"I am invited to schools with all kinds of pupils, from Canadians who have been here for generations, to schools with a large immigrant population and even a school attended mostly by the children of international diplomats. They sit enthralled for up to two hours. Principals have told me that they have never seen their pupils sit still for longer than 15 minutes. "Mostly, they want to know how I survived. I tell them about how I had been a terrible pupil in school and how my mother and grandfather and others I consider to have been my mentors instilled in me the need to excel, if not in school then at something else. I worked on my grandfather’s farm and acquired many resources that can account for my resilience and ability to survive the most inhumane conditions."The young people get what I am telling them. They send me letters and tell me how my talks inspire them to do better. One student in Thunder Bay came up to me and told me that he would stand on guard for Canada [a phrase taken from the Canadian national anthem]."

You say that it starts with words; is the attack at the synagogue in Pittsburgh a turning point from words to actions?

"I am concerned, very upset in fact, with what is happening in the United States. People do not seem to understand how bad things are."How can we turn things around at this point?"The Jewish community is broken up into many parts.  There are many organizations here, and they need to better coordinate with each other. "What we need is a resourceful person with vision to bring us all together. We have amazing people here who need to work together. In the Warsaw Ghetto, there were so many factions and they finally understood, when the chips were down, that if they did not work together they would not have been able to stand up to the German soldiers as they did. "What needs to happen is for people, not just Jews, because this is not just a Jewish problem (Canada sent young men over the ocean to fight against Nazi ideology and many lost their lives) to stand up and say: this is not going to happen in my school, in my community, in my town, in my country. Bad things happen when good people say nothing and the entire community must stand up. Because once an antisemitic act starts, it takes on a life of its own and it destroys the fabric of our country, of our free society."

You were recently targeted personally when a poster with your photo on it was defaced.

"Yes. Someone wrote over my face, Achtung!, the German for: Attention! This is particularly vile. Imagine a selection that happens in the middle of the night. In 1944, the Soviet army was only 70 km away and the Nazis did not need so many slave laborers anymore, so selection started in the middle of the night. In a sleep of the dead, after a very hard day of labor, suddenly the loud speakers come on very powerfully, blaring out: Achtung! Achtung! And you have to fly out of your bed and line up naked in front of the barracks and you are directed to where the capos make the selection. On one time, my father and uncle were sent away and I finally found them in the quarantine area, where an SS guard sat with a machine gun. My father came close to the fence and gave me a blessing and told me that if I survive, I must tell the world what happened here."

Your book, By Chance Alone, just won the 2019 Canada Reads competition. In it, you tell the story of your survival and your resilience as you built a new life for yourself and raised a family in Canada. This is, perhaps, the culmination of the work you have been doing over the past 3 decades, telling people across Canada and on March of the Living, about evil ideologies, hatred and the fight against it. What does this prize mean to you?

"I am very happy my book won the competition. It will give my book the continuity that we need since Holocaust survivors are a vanishing group. This book will be here for posterity – a book to read, and a warning as well. I see a lot of antisemitism. I am hoping that my book will be a warning for our younger generations to remain alert and to stand up to the evil. I am gratified that a book about the Holocaust was given such attention."

You talk about being upset with the growing antisemitism you see in both Canada and the United States in a way that makes it almost seem like a lost cause. Yet you also talk about your hope that the younger generations will heed you warning and turn things around. How much hope do you have that things can be turned around at this point?

"There is always hope. There has to be a lot of input by our people to strengthen the fiber of our children, both in high school and in the universities. I have hope because of the way the young people receive my message when I give talks across the country. It is absolutely amazing that I get all these calls from high schools and churches inviting me to speak. The interest is phenomenal which gives me so much hope."

Tags March of the Living
Advertisement
Subscribe for our daily newsletter