One protestor, wearing a t-shirt with the words "Boycott Israel," accused the Israeli MK representative of apartheid.

A demonstrator wears a shirt reading 'Boycott Israel' [File]
(photo credit: AFP/ MOHD RASFAN)
Advertisement
Anti-Israel activists disrupted on Tuesday a talk by MK Aliza Lavie (Yesh Atid) at Humboldt University in Berlin, in what appears to be a second antisemitic attack at one of Germany’s most famous educational institutions.The Boycott, Divestment and Sanctions activists hollered profanity and “The blood of the Gaza Strip in on your hand” and “Child murderer.”Lavie is on a tour of German academic centers and meetings with Bundestag deputies, as well as with members of the Jewish community.One protester wearing a T-shirt with the words “Boycott Israel” on it accused the Israeli representatives of apartheid.Lavie said in a statement: “No one in Israel and around the world will prevent us from telling the truth and driving back the industry of lies and incitement against Israel,” and continued: “Unfortunately my lecture quickly turned into a violent and antisemitic demonstration of BDS activists, including Israelis, who did not let me speak. 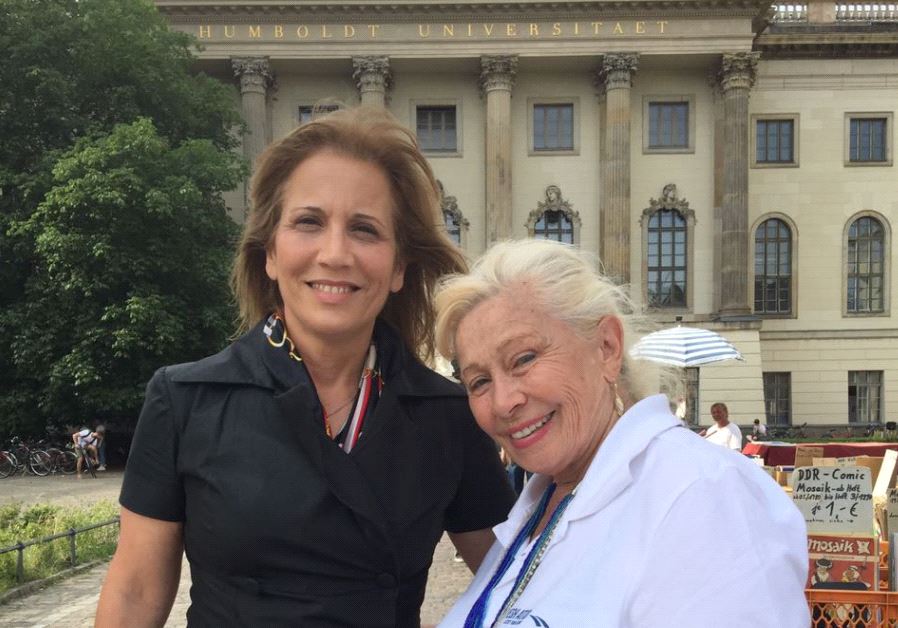 MK Lavie and Holocaust survivor Dvorah Weinstein“This is the ugly face of the boycott industry and the BDS movement. They are not fighting for peace or rights, but against the right of the Jewish people to a national home in the State of Israel. It saddens me that Deborah, a Holocaust survivor, should have witnessed this shameful spectacle,” the MK added.Twenty BDS activists stormed the talk, according to Lavie.Ronnie Barkan and Majed Abusalama, two of the activists who disrupted the Humboldt event, were barred from speaking at BDS events in Oldenburg last week due to antisemitism.The Mayor of Oldenburg Jürgen Krogmann pulled the plug on the BDS events. Holocaust survivor Deborah Weinstein, 82, said: “They came in advance to destroy and spoil, but it will not help them. Our work is completed. Many people, even those who were not for us, came, listened and asked questions, and wanted to hear us. I am sorry for that group of violent rioters, but I am not afraid and I will continue with this work.”One activist said he was a  "a journalist from Gaza"  and cited material from the Israeli left-wing NGO organizations B'Tselem and Breaking the Silence.Dr. Efraim Zuroff, head of the Jerusalem office of the Simon Wiesenthal Center, told The Jerusalem Post on Wednesday, “It is absolutely pathetic that university authorities cannot ensure that a meeting hosting an MK will not be violently disrupted by protesters.” He added: “It is unthinkable that a lecture about Israel from Zionist Israeli and pro-Israel voices can be disrupted by violence in a German university.”


Prof. Gerald Steinberg, the president of the Jerusalem-based NGO Monitor, told the Post: “The atmosphere against Israel in German society is increasingly toxic. BDS thugs shout down every Israeli that comes, preventing any discussion, and media platforms censor documentaries on antisemitism.”He continued: “At the same time Foreign Minister Sigmar Gabriel repeats NGO slogans to disparage Israeli democracy, and the only Israeli at a Bundestag hearing on human rights is totally discredited. More than a problem for Israel, this is Germany’s disgrace.”The delegation of Israelis and Weinstein had previously visited Bebelplatz, which is a square located on the Humboldt campus, and was the scene of the infamous book burning by Nazis of Jewish and non-Jewish works in 1933.One of the activists who disrupted the event was Israeli. Zuroff, the Wiesenthal Center’s chief Nazi-hunter, told the Post, that “the fact there are Jews among the protesters is unfortunate but nothing new. This has accompanied Jewish life for centuries.”In 2008, roughly 1,000 pupils and left-wing activists who unlawfully occupied the Berlin university and some of whom destroyed an anti-Nazi exhibition, were reacting to the university’s close ties to Israel, Humboldt’s then-president Christoph Markschies has said.He told the Post that one of the protesters in the lobby of the university said, “Damn Israel” when asked by another student to “stop” vandalizing the exhibit “Betrayed and Sold,” about the plundering of Jewish businesses under the Nazis.”