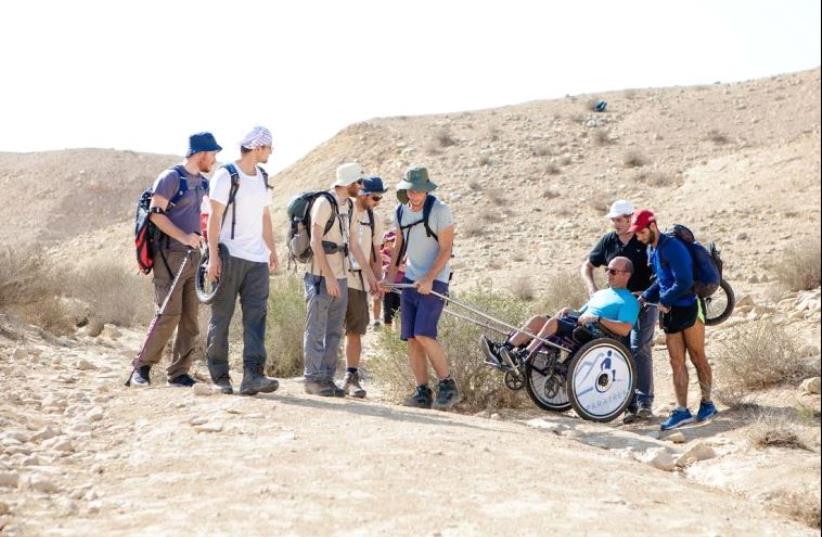 OneFamily’s annual CrossIsrael hike
(photo credit: JONNI SUPER)
Advertisement
After suffering a severe spinal injury when a pickup truck hit him in 2015, Peter Eckstein was told he would never walk again. But last week, Eckstein flew from his home in Canada to Israel to participate in a cross-Negev hike alongside disabled terrorism victims, after having regained partial mobility.“My inspiration to prove that the doctors are wrong came largely from the many injured Israeli civilians and soldiers that I have had the privilege to know, and the strength and courage that I have seen them display in order to recover to their fullest potential,” explains Eckstein, who has long been a generous supporter of terrorism victims in Israel, and who himself received tremendous support from them following his own accident.“I thought a wonderful way to thank some of them for my recovery would be to provide them with an experience that perhaps they thought they would never be able to do... and to stand side by side with those whose lives have been physically changed forever by terrorism,” he continues.The event took place in the framework of an annual hike organized by the OneFamily organization, which assists terrorism victims in Israel who have been bereaved, maimed and suffer from post-traumatic stress as a result of attacks. Although it was the ninth year this event was held, it was the first time ever that handicapped victims in wheelchairs joined the hike.Eckstein’s participation, in addition to other disabled hikers, was made possible by Paratrek, an Israeli company specializing in field trips and marches for the physically disabled.Paratrek enables people with physical disabilities to enjoy and hike along challenging nature trails and across rough terrain that are otherwise not handicap accessible.Seventy-five Canadians traveled to Israel to participate in the event.Gary Tile, the director of OneFamily in Canada, told The Jerusalem Post that while the hikers were split up into groups of varying levels, most hikers eventually gravitated toward the Paratrek group.“On day one, we had six or seven of the hikers from Canada join us. By the third day, there were 45 people who joined us. That specific group attracted most of the hikers – everyone got into the energy that was created,” he recounts, describing a unifying and inspiring experience in which each participant helped the other, creating a resounding sense of team spirit.The group included people who had suffered multiple gunshot wounds and brain injuries, blind hikers and multiple wheelchairs.One participant was Aharon Karov; considered the most serious victim of Operation Cast Lead, he was thought to be fatally wounded in January 2009.“It was extraordinary,” Tile says. “The coming together of the hikers’ community.”He notes that Eckstein had previously only been able to walk short distances on pavement, but by the end of this week he was “reprogramming himself and he did half of the hike.”Prior to his injuries, Eckstein was an avid athlete, and indeed his fateful accident occurred when he was out jogging. He never thought he would be able to enjoy beloved activities, such as jogging, hiking and cycling, again.“They threw us into the moderate, sometimes intermediate tracks,” says Eckstein, who had presumed his group would be taken on an easy route. “These are tough hikes, way beyond anything I expected to be able to do.”The trip exceeded Eckstein’s expectations. He presumed he would accomplish something he couldn’t before, and that other disabled people would have that same opportunity. “But what happened was something hard to explain – almost everyone got involved and at some point in time was pulling or pushing or cheering on,” Eckstein says. “It became one massive kind of team experience, which brought a whole different dimension to One- Family.”Pre-army volunteers who had planned to just come for a few days were so inspired they chose to see the hike to the end. Eckstein’s wife confronted her fear of heights as she climbed up and down ladders along the trail. Each individual took something different away from the experience.“It was about the victims and volunteers, intermingling and building connections and feeling like one big family,” Eckstein concludes. “I definitely have way more confidence in what I’m able to do. I’ll keep pushing myself to see what I can do next.”He adds that his long-standing involvement with OneFamily will certainly continue, and he will keep helping out disabled people like himself. “Although I’m not as disabled as I thought I was,” he laughs.