Herzog: Get ready for mass aliya from US due to anti-Semitism 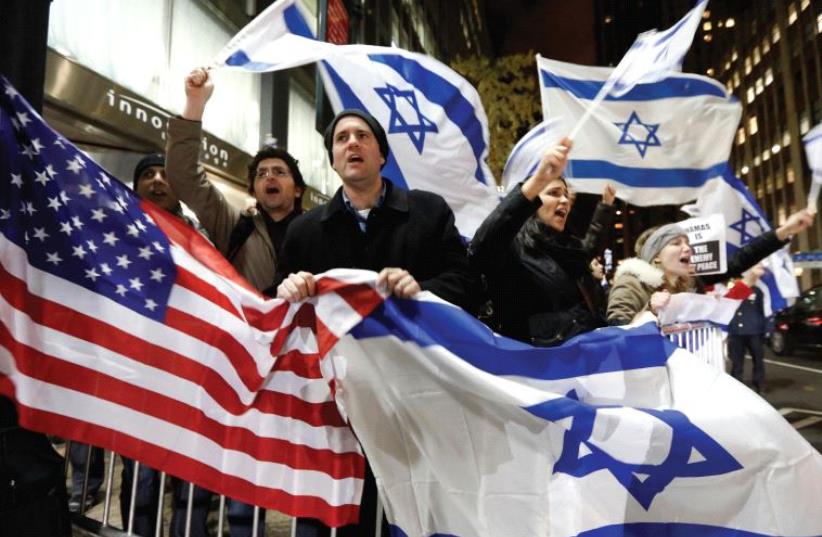 People wave American and Israeli flags‏
(photo credit: REUTERS)
Advertisement
Opposition leader Isaac Herzog called upon Prime Minister Benjamin Netanyahu on Monday to get Israel ready in case there will be massive immigration from the United States due to ongoing incidents of anti-Semitism across America.Speaking to his Zionist Union faction, Herzog expressed outrage over cemeteries that have been vandalized in Missouri and Pennsylvania and said they required immediate action by the Israeli government."I  want to express my shock and strong condemnation for the outbreak of incidents of anti-Semitism in the United States, France and other places around the world," Herzog said. "I call upon the government of Israel to urgently prepare a national emergency plan for the possibility that we will see waves of immigration of our brothers to Israel."
Philadelphia Jewish cemetery desecrated by vandals , suspected antisemitism (credit: REUTERS)
Herzog said he was convinced that US President Donald Trump's administration would do everything possible to stop such incidents. But other MKs said they saw Herzog's statement as an attack on the president, who was initially reluctant to condemn rising anti-Semitism.When Trump was asked about anti-Semitic incidents since his election in a joint press conference with Netanyahu, he spoke about his Jewish grandchildren, and the prime minister defended him.  "I've known the President and I've known his family and his team for a long time, and there is no greater supporter of the Jewish people and the Jewish state than President Donald Trump," Netanyahu said. "I think we should put that to rest."Herzog's associates stressed that he was not calling upon American Jews to make aliya due to the incidents.Officials working in the field of aliya said they were not aware of any expected "waves."Jewish Agency Spokesman Avi Mayer responded to Herzog's comments saying: "As Abba Eban once said, quoting Niels Bohr, prediction is very difficult, especially when it's about the future. Neither our data nor our field professionals indicate an impending wave of aliya from the United States."Yael Katsman, Director of Communications at Nefesh B'Nefesh echoed this. "We have been experiencing natural growth with regards to aliya interest and as such have not identified any unexpected spikes," she told The Jerusalem Post. "Our organizational model is equipped to service all those interested in making aliya."Diaspora Affairs Minister Naftali Bennett said he trusted the American government to take care of the problem."They are responsible for the security of their citizens," Bennett said. "I know the president, his administration and Congress care deeply about American Jews and will ensure their welfare."Former ambassador to the US and current deputy minister Michael Oren (Kulanu) said Herzog's statement revealed a fundamental misunderstanding of American Jewry."As the nation-state of the Jewish people, we, of course, welcome Jews from around the world but a strong American Jewish community is a paramount interest of Israel," Oren said.When Defense Minister Avigdor Liberman was asked about the incidents in the US at his Yisrael Beytenu faction meeting Monday, he said there was no connection between anti-Semitism around the world and the policies of the Israeli government.