Israeli Veganism: Introducing the land of soy milk and date honey to the world 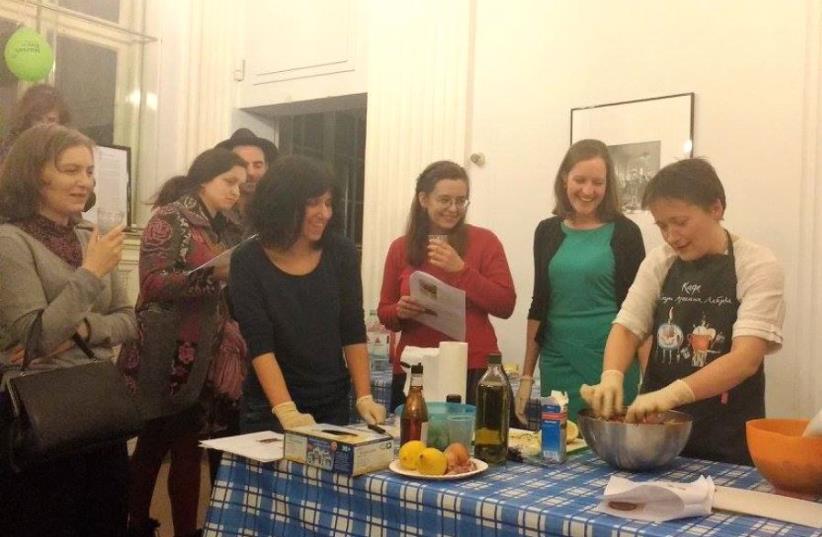 A vegan cooking class at the Nosh Berlin food festival in Germany
(photo credit: DEKEL PERETZ/FRANKELUFER SYNAGOGUE)
Advertisement
Israel is a leader in veganism and vegetarianism, an aspect of the Jewish state that is little known around the world.The World Zionist Organization’s Department for Diaspora Activities has set out to change that, introducing people around the world to both the Jewish and the Israeli connection to veganism.Last week, the WZO ran vegan workshops for attendees of Berlin’s first-ever, weeklong Jewish food festival, Nosh Berlin. The German-Jewish community was one of the first to cooperate in the relatively new initiative, which began in February, in time for Tu Bishvat.Starting in the US, the department distributed informational brochures to Jewish community members via Hillel, the Jewish Federations of North America and Moishe Houses.This initiative is part of the department’s wider mission to encourage a broader discussion in the Diaspora about Judaism, Zionism and Israel.“We are very disturbed by the growing distance between Judaism in the Diaspora, and especially among the younger liberal generation” and Israel, WZO Department for Diaspora Activities chairwoman Gusti Yehoshua Braverman told The Jerusalem Post on Sunday.“So we are trying to create a complex and varied dialogue about Zionism and Israel,” she said.There is clear confusion today among Diaspora Jews between Zionism, “the ideal of a secure state for the Jews” and their views of the Israeli government, Braverman said. “If they don’t like the government, then they don’t like Zionism either. We are trying to explain that the relationship is much more complex than that, so they won’t only fall into the clichés but will really challenge the discussion.”The WZO’s Beit Ha’am program, which the vegan initiative is part of, enables dialogue between Judaism, Zionism and Israel, which Braverman said are all “one parcel.”“I believe it’s not enough to be a Jew, but Israel need to be part of the Jewish identity,” she said, lamenting that in some Diaspora synagogues, rabbis refrain from mentioning Israel for fear that it is controversial.“As someone who meets many young Jews around the world... I each time come back a little more concerned about what I hear, and so we try to find subjects that will challenge the dialogue,” Braverman said. “We’re not preaching to the choir; we’re trying to talk to the unconvinced.”Thus the topic of veganism was raised as a matter of universal interest, and one in which Israel’s “Start-Up Nation” qualities can be conveyed. Israel reportedly has the largest percentage of vegans per capita in the world – an estimated 5% of the population – a statistic highlighted in the WZO brochure, which provides talking points for sessions on the subject. Thirteen percent of the population is vegetarian, and among them are 10 of Israel’s 120 MKs.The material also raises the subject of veganism in the IDF, noting that vegans may wear special non-leather boots and are entitled to a higher salary to accommodate their dietary requirements.The text also examines veganism’s place in Judaism and emphasizes laws of respect toward animals found in the Torah, such as giving animals a day of rest on Shabbat and feeding one’s animals before oneself. It features quotes from Jewish activist and celebrity Mayim Bialik, who is a vocal advocate of the connection between Judaism and veganism.According to Braverman, the initiative has thus far been met by a positive response from Jews and non-Jews alike, though the former is the primary target group. “Many times it surprises people – many don’t know we are so strong in veganism,” she said, having recently returned from the Berlin festival.“This is what we want – to raise curiosity about Israel and strengthen the connection [of Diaspora Jews] with it,” Braverman said. “Maybe Israel doesn’t represent them in one way, but it does in another way.”