WATCH: A festival of lights in a small corner of the world

Over the next 8 days, we will stream live from remote Jewish communities worldwide to show that although small in numbers, our love of tradition is strong and our light will never be extinguished.

By JPOST.COM STAFF
DECEMBER 12, 2017 10:26
The Jewish community lights the first Hanukka candle at Shalom Aleichem Sqare at the center of the Jewish Autonomous Oblast, in Russia
Advertisement
The Jerusalem Post and the Ministry of Diaspora Affairs are kicking off the Festival of Lights with an emotional broadcast from Russia.Two Hanukka lighting ceremonies: one in the Jewish Autonomous Oblast and another from Moscow's iconic Red Square.Today, at the Jewish Autonomous Oblast, or Birobidzhan, as it's most commonly referred to, is the one of the two independent Jewish independent territories in the world - the other, of course, being Israel.Bordering Russia and China, nearly 1600 Jews live in the Oblast, which was established by Joseph Stalin in 1934 to protect Russia from Chinese and White Russian terror groups.One of the highlights of the ceremony was a dance performance. The dancers, from the Surprise dance theater, are known worldwide and have won prestigious awards in Russia as well as at international competitions in Germany, France and Malaysia. The group dressed as Orthodox Jews and performed a high energy dance in front of a Hannukia backdrop.
A dance performance at the Birobidzhan Hanukka candlelighting celebration. (District Rabbi Eliyahu Riss)
Notably, the majority of the dancers are Christian and there is a great deal of respect and trust between the Jewish and Christian communities."This is the only place in the world (in my opinion) where there is no antisemitism," said District Rabbi Eliyahu Riss. "I feel safer as a Jew here than anywhere else. They will never say anything against Jews."Also in attendence at the candlelighting were the mayor and the governor of the district as well as many prominent political figures. The head of the Muslim community also came to celebrate Hanukka.Despite it's small numbers, the Jewish community in the oblast strives to maintain Jewish traditions. According to the Israeli Ministry of Diaspora Affairs, Kosher meat arrives via train from Moscow and a Minyan (prayer service) is had every Friday and Hanukka is celebrated with joy. 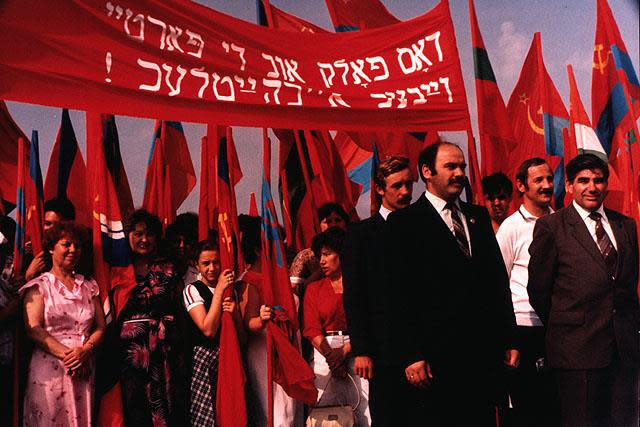 Marching towards the War Memorial, Birobidzhan, USSR 1987. The banner, in Yiddish reads: "The People and the Party are United" (NORMAN GERSHMAN/COURTESY OF OSTER VISUAL DOCUMENTATION CENTER AT BEIT HATFUTSOT) 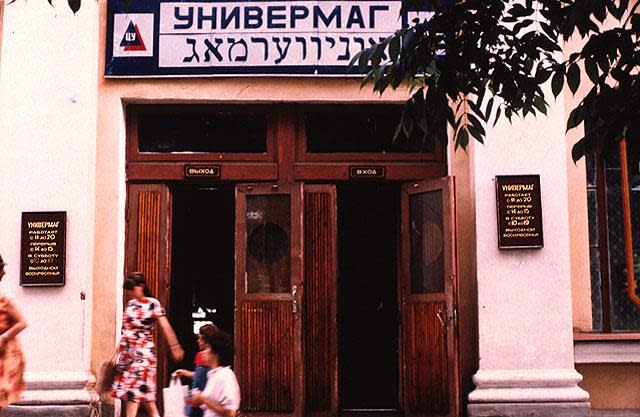 Inscription in Yiddish over a shop on Shalom Aleichem Street, Birobidzhan, USSR,1987 (NORMAN GERSHMAN/COURTESY OF OSTER VISUAL DOCUMENTATION CENTER AT BEIT HATFUTSOT)Over the next eight days, we will stream live from remote Jewish communities worldwide to show that although we may be small in numbers, our love of tradition is strong and our light will never be extinguished.
The Jewish communities around the world celebrating Hanukka.